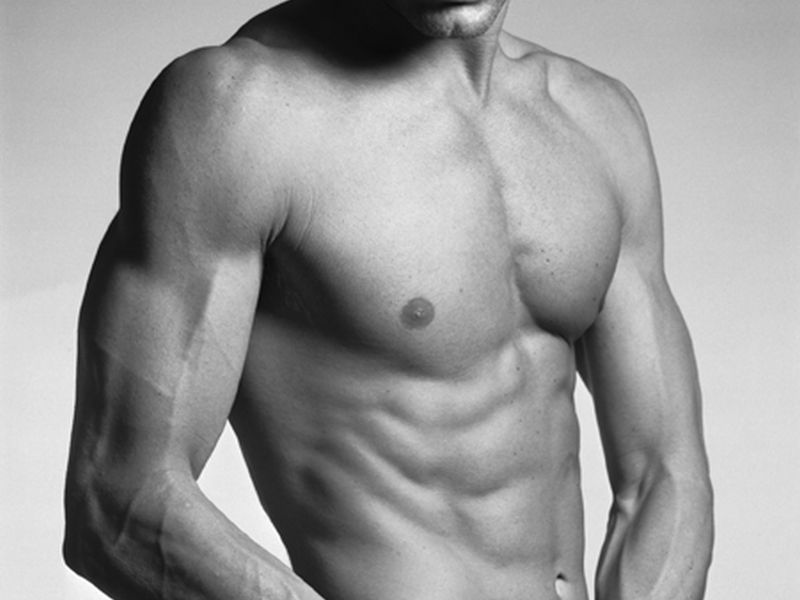 Eating Disorders Are Different for Men

People tend to have a specific image when they think of eating disorders -- a disturbingly skinny white girl with reed-thin arms, her ribs and shoulder blades prominent.

You don't think of a ripped, beefy muscle man chugging a protein shake and fretting about carbs between weightlifting sessions. But maybe you should.

Men and some minority groups have been drastically underrepresented in clinical trials that research treatment options for eating disorders, a new study reports.

The percentage of men who participated in clinical trials for eating disorders during the past decade was "less than half of the proportion we would hope to see," said study co-author Helen Burton Murray, director of the GI Behavioral Health Program at Massachusetts General Hospital in Boston.

Part of the problem is that men simply aren't considered as susceptible to eating disorders as women, experts said, and so doctors don't think to diagnose them.

But they also might be looking for the wrong symptoms. It's likely that there are male-pattern eating disorders that are completely different from the conditions that have been well-established in women, experts say.

Clinical trials for binge eating disorder between 2011 and 2020 included about 20% men, roughly half what's needed for true representation, Burton Murray said. Recent estimates hold that males account for as many as 40% of binge eating cases overall.

Male representation in anorexia/bulimia studies was even worse. Men account for 19% of anorexia or bulimia cases, but clinical trials for those conditions had less than 5% male participation.

One possible explanation is that doctors spot eating disorders in men less often, Burton Murray said. Men also don't seek medical treatment as often as women, and therefore are less likely to be recruited into a treatment trial.

"Males overall in other research studies have been shown to be less likely than females to even be diagnosed with an eating disorder, or seek or receive treatment," Burton Murray said. "That may be one reason why males weren't included -- because perhaps the recruitment strategies of these studies were to recruit from clinic populations where they already had an eating disorder diagnosed."

The findings were published recently in the journal JAMA Network Open.

"It turns out that women are overrepresented in clinical trials, generally," Walsh said. "My understanding is women spend more on health care in this country than do men. Women, for whatever combination of reasons, are more inclined to come into clinics, both for general care and for studies."

But it's also fact that men have been historically neglected in eating disorder treatment and research, said Stuart Murray, director of the Eating Disorders Program and the Translational Research in Eating Disorders Laboratory at the University of Southern California's Keck School of Medicine.

The first reported cases of anorexia in 1860 included both men and women, Murray said.

"From the get-go, we've known this was a disorder that could affect men," he noted.

But for the next century men were excluded from eating disorder research, even as the field grew by leaps and bounds with the development of diagnostic criteria, symptom measurement and even treatments, Murray said.

"All of those really important developments happened in the complete absence of any research from men," Murray said.

This led to diagnostic criteria that were female-centric. For example, you couldn't be diagnosed with anorexia unless you'd stopped having menstrual cycles, Murray said.

Even when medicine eventually acknowledged that men could develop eating disorders, those cases were considered so rare that they could skew the results of clinical trials, Murray added. Therefore, men have tended to be directly excluded from eating disorder trials.

It's now known that men can develop anorexia, bulimia and binge eating disorders, the same as women.

"They look very similar to the symptoms of women. No one thinks they need significantly different treatment or interventions, with the limited data we have," Walsh said.

But there also are gender-specific types of eating disorders that affect men and have not been adequately defined or researched, Murray said.

"If you believe that eating disorders are in some way linked to an idealized body image, the ideal body is very different for males and females," Murray said. "The ideal female body is thin, very slender and very low weight, and that gives rise to the behavior that we consider to be classic eating disorders.

"The male body ideal is often super-muscular and lean, sort of really ripped and really big," he continued. "That body ideal doesn't give rise to the same set of behaviors at all. It's unlikely you're going to achieve a body that looks like that if you are restricting calories."

"It's rigid. It's rule-driven. It's impairing to normal life -- all the characteristics of an eating disorder, but it's oriented towards becoming more muscular as opposed to becoming more thin. That's the only difference," Murray concluded.

Many eating disorder studies don't bother to note race or ethnicity, the researchers found. Only about 62% of trials reported race and 43% ethnicity.

Among those clinical trials reporting race, Hispanics and Asians appear to be underrepresented, the study found.

This could be because minority groups have less access to health care, or because they are less likely to seek care, Burton Murray and Walsh said.

"Folks of limited economic means and folks in minorities don't get good access to medical care in general," Walsh said. "That may be echoed by their underrepresentation in treatment trials in eating disorders. These problems are real, but they extend beyond the eating disorder trials."

Burton Murray cautioned that her study only focused on 21 trials that appeared on ClinicalTrials.gov, and might have missed trials that didn't report results there or research conducted in other countries.

However, she noted that a recent study, which focused on minority representation in such trials, reached similar conclusions and included both clinical trials and observational studies.

The U.S. National Institute of Mental Health has more about eating disorders.