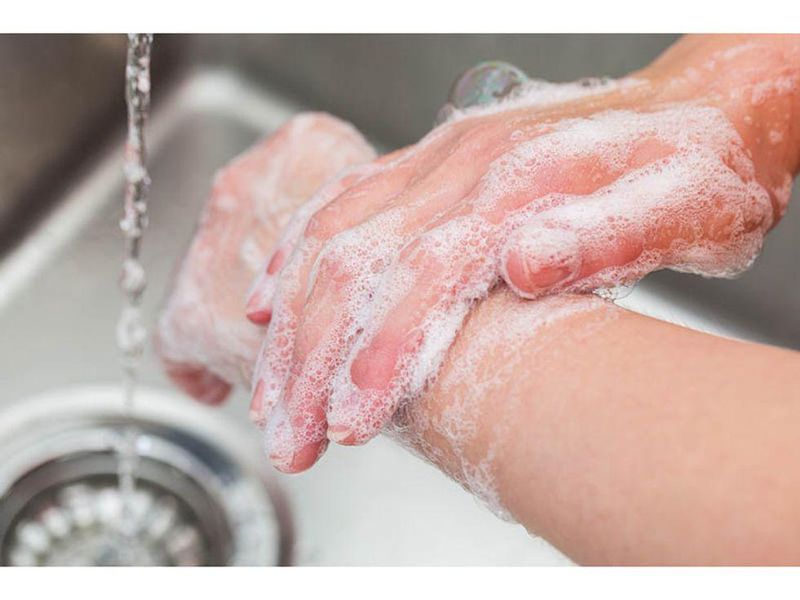 Physics Shows Why 20 Seconds Is Right for Hand-Washing

That's how long you need to wash your hands to remove germs, a new physics study confirms.

Typical hand-washing guidelines -- including those from the U.S. Centers for Disease Control and Prevention -- advise scrubbing your hands for a minimum of 20 seconds.

To assess that recommendation, researchers used a mathematical model to examine the key mechanics of hand-washing and determine how long it takes to remove viruses, bacteria and other particles from the hands.

The model used wavy surfaces to represent hands because such surfaces are rough on small spatial scales, the study authors explained. The model worked in two dimensions, with one wavy surface moving past another wavy surface, and a thin film of liquid between the two.

Particles get trapped in the rough surfaces of the hand, so the energy from the water flow must be high enough to get them out, the researchers noted.

The strength of the flowing water depends on the speed of the moving hands. A stronger flow removes particles more easily, according to the study published Aug. 17 in the journal Physics of Fluids.

"Basically, the flow tells you about the forces on the particles," said study author Paul Hammond, of Hammond Consulting Limited, in the United Kingdom. "Then you can work out how the particles move and figure out if they get removed."

He compared it to scrubbing stains out of clothing.

"If you move your hands too gently, too slowly, relative to one another, the forces created by the flowing fluid are not big enough to overcome the force holding the particle down," Hammond explained in a journal news release.

The model confirmed that it takes about 20 seconds of vigorous hand-washing to dislodge germs.

The researchers noted that the model didn't consider chemical or biological processes that occur when using soap. But understanding the mechanisms that physically remove particles from hands may help lead to more effective, environmentally friendly soaps, Hammond suggested.

"Nowadays, we need to be a bit more thoughtful about what happens to the wash chemicals when they go down the plughole and enter the environment," he noted.

The U.S. Centers for Disease Control and Prevention has more on hand-washing.