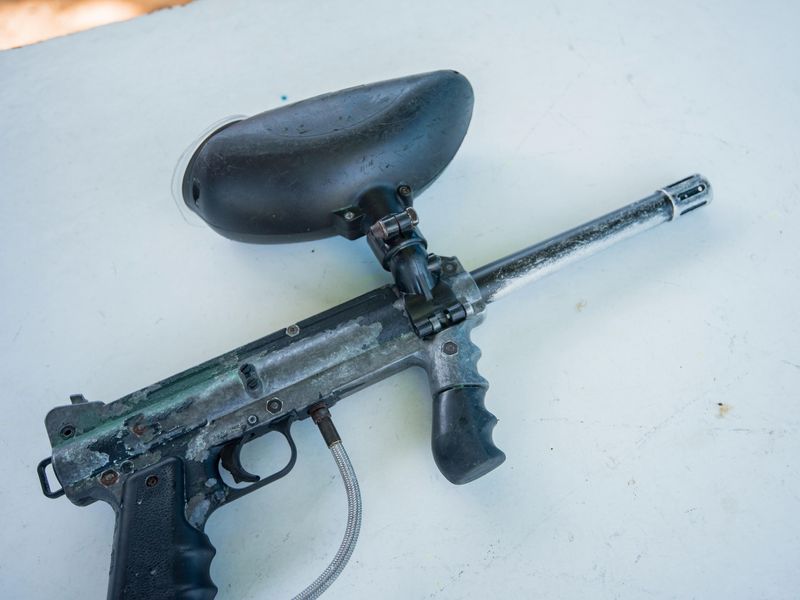 Paintball Guns Are Being Used to Harm - And Blinding Victims

When a paintball bursts out of a CO2-powered gun, it can travel nearly 300 feet per second.

Pointed in the direction of a face, that paintball - meant to be used in certain jobs or for entertainment while wearing protective gear - can cause devastating injury to the eye, including ruptures and permanent blindness.

So, when a string of paintball drive-by shootings unfolded in Chicago in 2020, researchers from University of Chicago decided to look more closely at what happens to patients who are injured this way.

"In one weekend, we had eight drive-by paintball attacks and a lot of these patients ended up losing vision permanently. Some required multiple surgeries," said study author Dr. Shivam Amin, a second-year resident in the department of ophthalmology and visual science at the University of Chicago. "We reviewed the literature and noticed that no one had really looked at how paintballs can damage the eye when they're used as an assault weapon."

For the study, the researchers looked at 20 patients who suffered paintball eye injuries between January 2020 and December 2021.

In 12 cases, patients needed surgery, including six who had a "ruptured globe," where their eyeball was ripped open. The condition requires surgery to stitch the rupture.

Three of the patients eventually needed a procedure called an evisceration. In this, the doctors replace the insides of the eye with silicone.

Five patients were permanently blind in one eye.

"These are small objects that travel at very high speeds. And when you aim for the head from a very close distance and you make contact with the eye, the consequences can be quite severe, including requiring multiple surgeries, loss of vision and even in certain situations where we have to completely remove the eye because it's unsalvageable," Amin said.

When the eye can't be saved, it needs to be removed because of infection risk or the possibility of an autoimmune issue that can attack the opposite eye. That condition is known as sympathetic ophthalmia.

Even if people who are hit close their eyes, which is a natural defense, that's not enough to prevent rupture, said Dr. Ryan Stanton, a spokesperson for the American College of Emergency Physicians and an emergency medicine physician in Lexington, Ky. Stanton was not involved in the study.

Losing an eye can, of course, significantly alter a person's life. Among the many changes are that a person has to have "binocular" vision for depth perception. Not having vision on one side, including no peripheral vision, can make a person more vulnerable to being hit by a vehicle or other object on that side.

"There's a high risk of other things potentially happening to you," Stanton said.

Organized paintball businesses require masks and goggles for good reasons, Stanton said, including the overall sensitivity of the tissues of the face, not just the eyes. Paintballs can also cause serious damage if someone is hit in certain parts of the neck, as well as on the ears.

"If that ball hits you just right in the ear, not only does it cause a hematoma, which could kill the cartilage of your ear, but if it hits right at the canal, it'll rupture the eardrum and destroy those ossicles [auditory bones] and everything else as well," Stanton said.

"These paintball guns - though they're nonlethal weapons - are still potentially very dangerous. Just because something can't kill somebody doesn't mean they can't do permanent damage. And sometimes that can be even worse," Stanton added.

The takeaway is that paintball guns are not benign, Amin said, and if used in unsupervised settings they may cause devastating, irreversible harm.

"We're hoping that we can raise awareness about their dangers and that these attacks ultimately stop. That would be our hope," Amin said.

The findings were published recently in the American Journal of Ophthalmology.

The American Academy of Ophthalmology has more on recognizing and treating eye injuries.