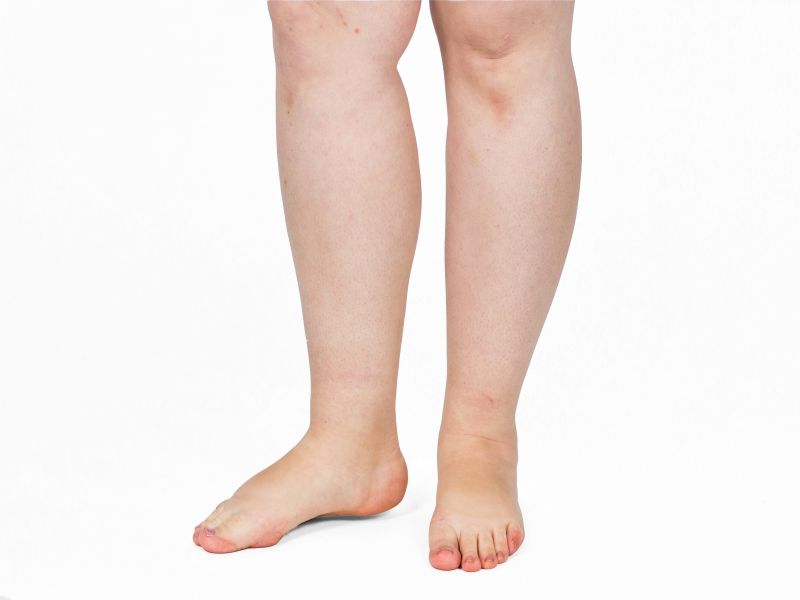 The researchers suspect that measuring leg fat could help guide blood pressure prevention efforts. Those with bigger legs may not need to worry as much about high blood pressure -- a contributor to heart attack and stroke.

"Distribution of fat matters. Even though we think that fat is bad in all cases, it might be that leg fat is not as bad as we think," said the study's lead author, Aayush Visaria. He's a fourth year medical student at Rutgers New Jersey Medical School.

Previous research has found that excess weight around the middle can increase the risk of heart disease and diabetes. "Middle fat is really important because that's where all the organs are -- liver, pancreas, intestines -- and they're all affected by fat. Too much fat messes up the function of those organs," Visaria said.

But that doesn't mean folks who gain more weight in their lower limbs don't need to maintain a healthy weight, too. "Regardless of where the fat is, a lot of fat isn't good. Having muscle is better than having fat. Our study says, if you have fat, more fat in legs is better than having it in the abdomen," Visaria said.

Dr. Vivek Bhalla is director of the Hypertension Center at Stanford University in California. "This study should not be interpreted to say that if a patient has higher leg fat that they will not develop high blood pressure. It is an important study to motivate further research into the factors as to why blood pressure would be lower," he explained.

Bhalla said it's not yet clear how fat distribution might affect your high blood pressure risk. He said it's possible that fat stored in different areas of the body may act in different ways.

Visaria suggested that the difference may have something to do with triglyceride (a type of blood fat) levels. People in the study with more leg fat had decreased triglyceride levels, he noted.

The new study included almost 6,000 adults participating in national health surveys between 2011 and 2016. Their average age was 37. About half were female. Nearly one-quarter of the group had high blood pressure (defined in this study as blood pressure above 130/80 mm Hg).

The researchers used special X-ray imaging to measure fat in the legs. These measurements were compared to overall body fat measurements. Men who had 34% fat in their legs were defined as having high leg fat. For women, the cutoff was 39%.

Those with higher leg fat were 61% less likely to have high blood pressure than their slim-legged counterparts. The findings held even after the researchers adjusted for factors such as age, sex, race/ethnicity, smoking, alcohol use, cholesterol levels and levels of waist fat.

The researchers noted that this study wasn't designed to prove a cause-and-effect relationship. It could only show an association between higher leg fat and lower blood pressure. Visaria said more research is necessary, particularly in older people. He said the people in this study were between 20 and 59, so these findings may not be generalizable to people over 60.

Bhalla pointed out that "obesity is a major epidemic in the United States and around the world, and like many things in medicine, it's not black or white, but rather there are shades of gray."

In addition, Bhalla advised, "As we learn more about different types of fat, the distribution of fat, what factors are secreted by different types of fat and how that affects risk of common conditions -- [including] high blood pressure, heart disease and diabetes -- we need to keep in mind that we have to treat patients as individuals, measure their individual risk, and counsel patients appropriately."

He also said it's important to remember the things people can do right now to lower their blood pressure, including:

The findings were scheduled for presentation Thursday at a virtual meeting of the American Heart Association. Findings presented at meetings should be viewed as preliminary until they've been published in a peer-reviewed journal.