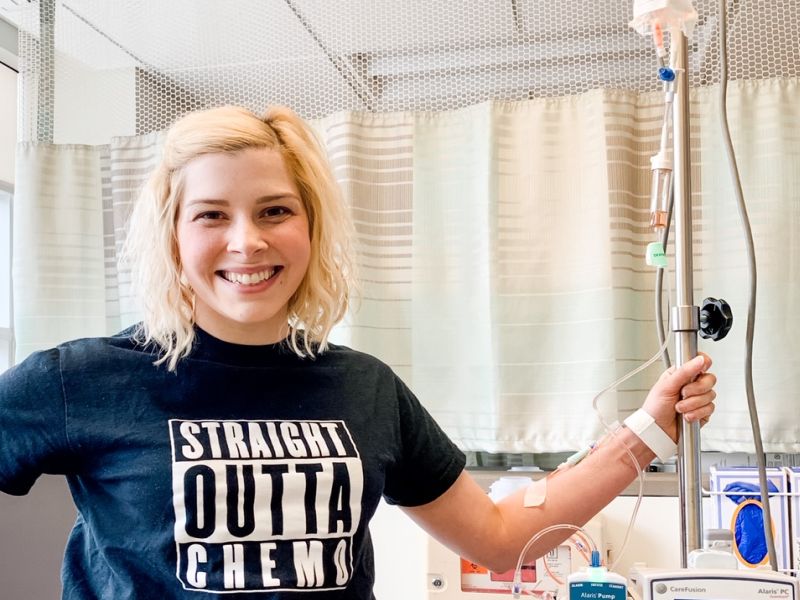 Christina Kosyla, a drama and yoga teacher in her late 20s, was about to take the trip of a lifetime when she felt a strange twinge in her shoulder. A co-worker also pointed out some slight swelling in Kosyla's shoulder.

Kosyla and her best friend were planning to hike the Camino De Santiago -- a 500-mile pilgrimage from France to Spain that required exceptional physical fitness and stamina.

She was concerned that her symptoms might interfere with her ability to complete the trip, so she went to her doctor to get checked out. Her doctor ordered an X-ray and an ultrasound.

"I had noticed the tension sensation, but attributed it to my yoga practice. The doctor suspected it was a lipoma (a noncancerous growth of fatty tissue)," Kosyla said. The doctor reassured her it was nothing serious, and said, "Go on your trip."

So she did. "It was truly the adventure of a lifetime," Kosyla said.

But when she got back, the Bordentown, N.J., resident knew something was definitely wrong. She bounced from doctor to doctor for a year. She had surgery to have tissue samples removed from the growth.

"The initial surgery removed 3 centimeters of inflamed tissue. Four months later, it had tripled in size. It was now 9 centimeters and attached to my clavicle [collarbone]," Kosyla said.

It took a year to get the correct diagnosis: Kosyla had a desmoid tumor. It had grown to the size of a grapefruit when she was diagnosed, and doctors gave her the distressing news that surgery would involve removal of her collarbone, the top three ribs and part of her breastbone on her right side. (She's right-handed.)

Had she been diagnosed when her tumor was much smaller, Kosyla would have had more treatment options, including radiation.

Marlene Portnoy, co-founder of the foundation, said, "We think they may be underdiagnosed and believe that although they're rare, the incidence is far greater than what's known."

These tumors are thought to develop from cells called fibroblasts. These cells make up the structural support (connective tissue) throughout the body. These cells are also involved in healing wounds. Without these cells, humans can't survive, according to the DTRF.

Experts think genetic mutations cause desmoid tumors. They can be slow-growing or they may grow quickly. They generally don't spread to other parts of the body, and typically aren't considered cancerous.

But desmoid tumors can be serious. "They're not benign tumors. They can be life-threatening," Portnoy said.

With the help of her family and her health care team, Kosyla decided not to have the surgery. Instead, she's undergoing chemotherapy. Surgery, radiation, ablation (tissue removal or destruction) and medications (like chemotherapy) are treatment options, the DTRF said.

"It's not a typical chemotherapy journey. For me, it's a marathon, not a sprint. I'm only 31, but am looking at long-term management," she said.

The treatments leave her fatigued. Her immune system is compromised, and that's kept her out of her classroom for a year now. With the COVID-19 pandemic, she's not sure when she'll be able to return to teaching.

"There's not a corner of my life that hasn't been touched. Treatment zaps me of my energy, and I'm used to being someone with a lot of energy. I just am not feeling like myself. I get aches and pains, my right hand started shaking, and I can't do [yoga] handstand poses or pull-up competitions like I used to. It's been very humbling," Kosyla said.

Lynne Hernandez is director of events and operations at DTRF. She said, "There are so many emotional and psychological aspects to having a desmoid tumor. When someone says they have a tumor, but it's not cancer, they don't always receive the same sympathy. But desmoid tumors can affect mobility and cause chronic pain."

Kosyla would love for the public to understand that while she doesn't have typical cancer, her tumor has had an enormous impact on her life. She said people often tell her, "At least it's not real cancer."

"I would ask people to treat it just as seriously though. This is a chronic, lifelong battle for me," Kosyla said.

For others dealing with the condition, Kosyla recommends seeking support through social media. "Find other people who understand the exact situation you have and how frustrating and challenging it can be," she said, adding that not everyone with a desmoid tumor will be as affected as she has been.

"Some people have surgery and never have a recurrence," she explained.

Kosyla said finding a sense of community with other people with desmoid tumors has been her "go-to" source of strength.

Kosyla and Portnoy emphasized how important it is to be your own advocate and push for answers from your health care team if you know something is wrong with your body.