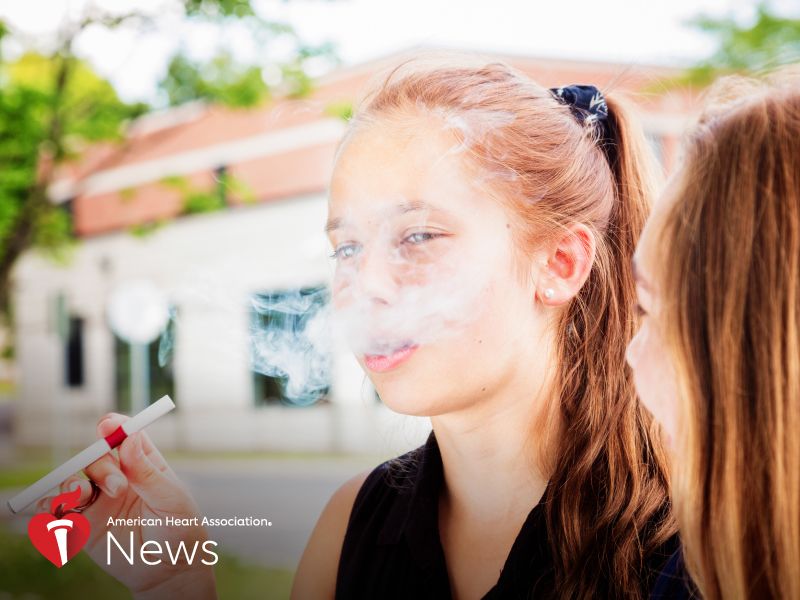 AHA News: Amid 'Epidemic' of School Vaping, a Search for Solutions

One of the toughest challenges for those fighting the problem of vaping in schools may be getting people to realize how big the problem is in the first place.

Many teachers and parents don't know that the number of teens using e-cigarette devices has grown rapidly in just the past several years. Adults might not even recognize the most popular vape products, which look more like something out of Silicon Valley than Marlboro Country.

"They think it's harmless," said Jordan Roberts, who manages a youth smoking prevention program for the Kansas Department of Health and Environment. "Their peers are doing it, and it's part of what it takes to be cool."

Vaping's growth has been stunning.

According to the Centers for Disease Control and Prevention, nearly 21% of high school students used e-cigarettes in 2018. That was an increase of nearly 78% in just one year. Among middle school students, the growth rate was 48.5%, from 3.3% to 4.9%.

The best-known vape product is Juul - a sleek device often compared to a portable USB drive and "so popular that it's its own verb," Roberts said.

News reports tell of the challenges from coast-to-coast. A high school principal in California told the Sonoma West Times & News that vaping was his school's No. 1 disciplinary issue. In New York, schools in the Utica area have turned to extra security checks and vape detectors in bathrooms, according to the Observer-Dispatch.

"It's everywhere," Roberts said. "It's not limited to urban areas at all. It's even those small 1-A schools that are dealing with this issue."

Schools, she said, are at the "core of the vape epidemic because that's where kids are the majority of the time."

Hailey Kisner just graduated from high school in Hutchinson, Kansas. The 18-year-old said her peers don't see vaping as related to smoking. "Smoking to them? Completely a big no-no. It causes cancer, and death. And they're like, 'Juuling? It's fine.'"

Psychologist Thomas J. Payne said that attitude is common. Payne directs the ACT Center for Tobacco Treatment, Education and Research and is a professor at the University of Mississippi Medical Center.

In explaining vaping's potential risks, he said it was "a young area of research." But even so, "There is sufficient evidence, with respect to physiological effects and the nature of the toxins delivered, that raises grave concerns that these products carry significant health risks," Payne said.

"The strength of the evidence strongly suggests we cannot wait 30 years to see what the long-term health effects might be before we take action."

Payne said combating vaping will require the type of wide-ranging campaign that has helped reduce cigarette smoking in the U.S. to an all-time low among adults.

One response, Roberts said, should be comprehensive school policies that send a clear, consistent anti-vaping message. Such policies, she said, should prohibit tobacco use of all kinds among school staff, visitors and parents on school grounds, in school vehicles and at school-sponsored events.

Reaching elementary students before they contemplate starting is also essential, Roberts said. Using fellow students might be key to connecting with all youths.

"When you're 15, you really think you're invincible. You think, 'Death is not close to me right now.' But what young people really, really do care about is their social structure. Who they're friends with, what their friends think of them."

As a student, Kisner worked with Roberts in just such a role, through Kansas' Resist program. The anti-tobacco effort has a statewide council of 15 students in grades 8-12, plus regional and local chapters that often are embedded in student councils, Boys and Girls Clubs and other groups.

Kisner said although being the same age as her student audiences gave her some advantages in being relatable, she thinks anyone could take her same approach.

"I always start my presentation by saying, 'I am not against what you are doing. I am not against you or your parents, or the smokers. I'm against the tobacco industry. All I'm here to do is inform you and educate you.'"

The response can be dramatic.

"They're like, 'Holy cow! I really just thought it was water vapor!'" Kisner said. One student even came up to ask, "How do I quit? I don't want to do this anymore."