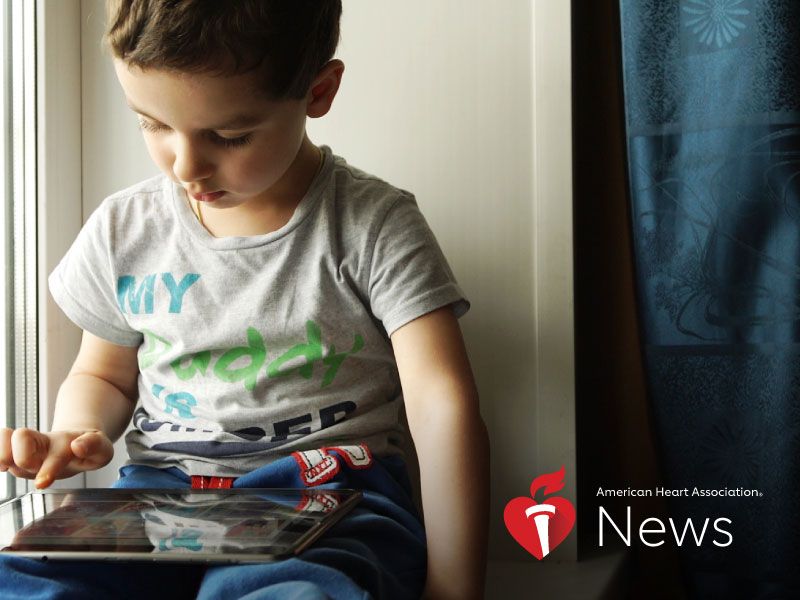 AHA News: With Summer Vacation Here, How Much Screen Time Is Too Much?

Dazzling graphics, engaging applications and a dizzying array of beeps, pings and rings make smartphones and other portable gadgets hard to resist. With summer vacation starting for millions of American children, many parents are asking: How much screen time is too much?

In newly released guidelines, the World Health Organization recommends no screen time for children younger than 1. Kids 2 to 4 years old shouldn't spend more than an hour per day in front of a screen, and less is better.

"What kids at that age need is interaction with parents and other people," said Dr. Stephen Daniels, a professor and chair of the department of pediatrics at the University of Colorado School of Medicine and pediatrician-in-chief of Children's Hospital Colorado. "If they are interacting with a device, it has the danger of becoming the accepted norm."

But screen time is a default activity for many children. And the older kids get, the more time they spend in front of a screen. According to the nonprofit Common Sense Media, so-called tweens, children ages 8 to 12, spend nearly six hours per day using media, and teenagers average closer to nine hours a day.

"I think we should be deeply worried about it," said Dr. Wendy Sue Swanson, a pediatrician and the chief of digital innovation and digital health at Seattle Children's Hospital. "Since the iPhone and all these devices started washing into the world, we live very differently than human beings have ever lived before."

Too much sedentary behavior like screen time can set children up for health problems down the road, including heart disease. "If you're using a screen, you're not walking places, going to the park or running around playing tag," Swanson said.

While some studies have found that so-called exergames like "Dance Revolution" can increase movement, Swanson cautioned about replacing physical activities with virtual ones.

"If it's a rainy day, and they're going to play a dance game instead of Pac-Man, great," Swanson said. "But it's still replacing something more meaningful, a real-life movement with social interaction that builds esteem, comradery and sportsmanship."

There are concerns about screen time's impact on mental health as well. A recent study suggests 2- to 17-year-olds who spend at least seven hours per day on screens are more likely to be diagnosed with depression or anxiety than children who engage in less screen time.

It's not clear whether screen time causes depression and anxiety, or if people who are anxious and depressed retreat to their screens, said Dr. David Hill, a pediatrician and chairman of the American Academy of Pediatrics Council on Communications and Media. "Both may be true, or one may predominate," he said.

Not all online activities are bad, Hill said. Children do their homework online, connect with other like-minded kids and engage in creative endeavors such as art, photography and programming. But parental involvement is crucial.

"They need parents to guide them, reiterate the lesson and help them to understand what they're seeing," Hill said.

Daniels recommends children and adolescents restrict screen time to two hours a day, adding that some places, notably the dinner table and the bedroom, should be no-device zones. Gadgets in the bedroom may delay bedtime, he said, and some research suggests the light emitted by screens impacts the ability to fall asleep and the quality of sleep, which has been linked to obesity in childhood and later in life.

Resources are available for parents, including a number of apps designed to manage screen time. The American Academy of Pediatrics offers a media plan that places screen time in a larger context that includes other activities like homework, sports and family time.

Swanson recommends parents help children set their own limits and then enforce consequences when children do not self-regulate.

"Parents are dealing with something stronger than them, and it's only going to get better, more inventive, more delightful," Swanson said. "We have to be more thoughtful about how we rear children to be masters over the technology."