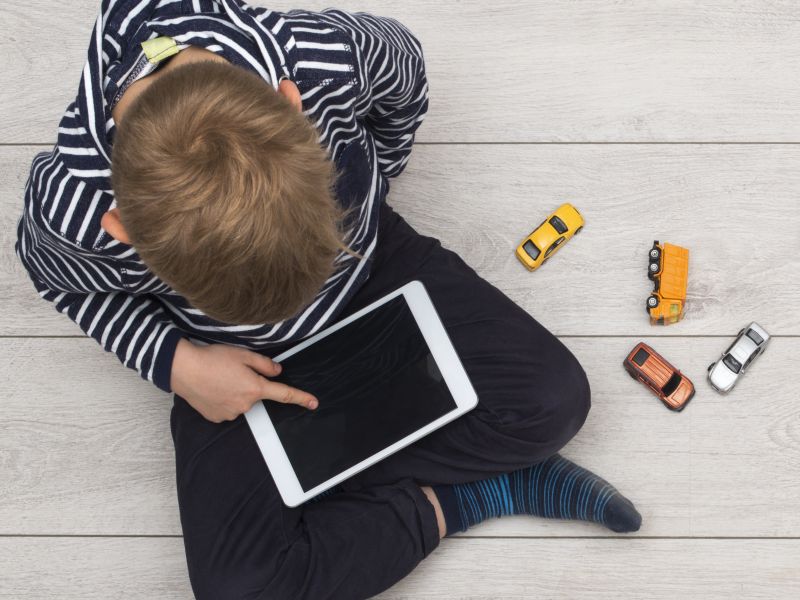 Five-year-olds who spend more than two hours a day in front of a smartphone or tablet may be at risk of attention problems, a new study suggests.

Excessive "screen time" among children has been the subject of much research -- particularly now that even the youngest kids are staring at phones and iPads every day.

The American Academy of Pediatrics advises parents to set limits on screen time for preschoolers: no more than one hour a day for 2- to 5-year-olds. That's, in part, to make sure they have plenty of "unplugged" playtime.

In the new study, researchers found that when young children went well above those limits, they were at much higher risk of attention issues.

Compared with their peers who spent no more than a half-hour in front of a screen each day, 5-year-olds who logged over two hours were six times more likely to have "clinically significant" attention issues.

And they were nearly eight times as likely to have signs and symptoms of attention deficit hyperactivity disorder (ADHD).

The findings do not prove that screen-gazing is to blame, acknowledged senior researcher Dr. Piush Mandhane, an associate professor at the University of Alberta in Canada.

But two-plus hours of screen time a day is clearly excessive, Mandhane said. "And it's something that parents can act on," he noted.

Preschoolers should be up and moving instead, said Mandhane. His team found that youngsters who regularly had "organized" physical activity were at lower risk of attention problems.

Given the ubiquity of mobile devices -- and young children's interest in them -- "it's never too early to make a screen-time plan for your kids," Mandhane said.

"And less is better," he added.

It's true that screen limits make sense, and that young kids should be physically active, said Yamalis Diaz, a clinical assistant professor of child psychiatry at NYU Langone Health in New York City.

"No one disputes the need for children to be active," said Diaz, who was not involved in the study. "I tell parents, 'screen time steals real time.'"

However, she cautioned, this study cannot pinpoint screens as the culprit behind kids' attention issues. It's possible those children "battle" their parents on a lot of things -- and parents either give in, or hand over a phone as a way to avert a meltdown.

"These may be the children who have difficulty accepting limits in general," Diaz said.

There's also the question of how much time their parents were spending on devices. Some kids, Diaz noted, learn that the best way to get mom and dad to look up from their phones is by misbehaving.

As it stands, she added, "we're still waiting on research to show whether [screen time] has any particular effects on children's brain development."

The findings were published online April 17 in the journal PLOS ONE. They're based on more than 2,300 Canadian families taking part in a long-term health study.

Parents reported on their children's typical screen use -- including TV, computers, tablets, gaming devices and smartphones -- at ages 3 and 5. When their kids were 5, parents completed a standard questionnaire on child behavior.

Overall, heavy screen use at age 5 was linked to higher risks of attention problems and behavior problems consistent with ADHD. That was true, Mandhane said, even when factors like family income and parents' stress levels were taken into account.

Why would screen time affect kids' ability to pay attention? One way, Mandhane said, could be by supplanting other activities, such as exercise and sleep.

Organized physical activity is important in building attention skills, Diaz agreed. "There's real peer-to-peer interaction," she said. "They're having to listen to an adult. And they're learning new things, like fine-motor skills."

Adequate sleep is critical, too, Diaz said. "Even as adults, we see that," she noted. "If we're sleep-deprived, we're grouchy and it's hard to pay attention."

The American Academy of Pediatrics has advice on screen time.