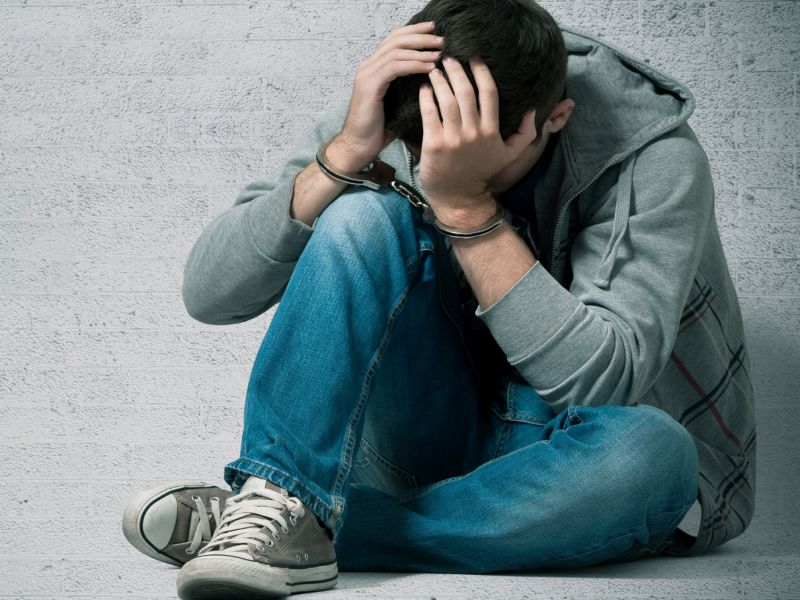 Teens' Odds for Suicide May Triple While in Jail: Study

Young people jailed in adult prisons, often while awaiting trial or sentencing, are at high risk for suicide, and the prison system is doing little to stop it, a new study warns.

Suicide accounts for roughly 1 death in 5 among American children and young adults. But suicide rates for young people behind bars were two to three times that rate between 2000 and 2014, researchers reported.

Being jailed can be a powerful trigger for someone who has already thought about taking his own life, according to Jonathan Singer, a secretary of the American Association of Suicidology.

"If you have somebody who is saying, 'I've screwed up. I don't have a future, and I've let people down. I feel hopeless,' and they are awaiting sentencing, then it is very easy, without some sort of intervention, they could just go down that rabbit hole," he said.

Some incarcerated youth may simply believe that "life is going to be even more miserable, so end it now," Singer said.

Suicide rates for offenders under age 25 in adult jails accounted for 53 percent of deaths in that age group -- five times more than among young people not in custody, according to researchers.

Most died by hanging or suffocation, and most of the victims were in adult jails awaiting trial or sentencing, the study found.

Few suicide victims in jail signal their intent or leave a note, and experts said prison staffers aren't trained to recognize warning signs or know when to intervene.

She's a post-doctoral scientist in the Center for Suicide Prevention and Research at Nationwide Children's Hospital in Columbus, Ohio.

Key risk factors include prior suicide attempts, a history of mental health problems as well as alcohol and drug abuse, Ruch said.

But life in jail magnifies the risk, researchers found. For example, the prison environment makes it less likely that young inmates will confide their feelings of stress.

And while all teens and young adults suffer similar mental health problems, those in jail are less likely to have their problems recognized, Ruch said.

"Suicide prevention efforts for incarcerated youth should focus on timely and ongoing suicide risk assessment and safety planning," she said.

Programs that address the special conditions of confinement are needed, along with greater attention to safety, Ruch said. Steps such as removing shoelaces and bed sheets that inmates could use to attempt suicide should be standard for at-risk youth, she added.

For the study, Ruch and her team reviewed 2003-2012 data from the National Violent Death Reporting System on more than 200 suicides among jailed teens and adults in their 20s, as well as more than 9,900 suicides among youths not in jail.

One problem, Singer said, is that most people who do suicide assessments in jails aren't trained mental health workers.

Having an outside mental health professional on call to evaluate a troubled teen or young adult may encourage them to open up about their feelings in ways they wouldn't with a prison employee, he said.

In addition, Singer said, records of earlier suicide attempts should be made available so prison officials are aware of the increased risk. If a young person had violent confrontations outside prison, that may signal an increased suicide risk, he noted.

Unfortunately, jailers often think their role is to lock up people to protect the public, so they may ignore mental issues a prisoner is having, Singer said. The attitude of some is, "you're a menace to society, so whatever you do to yourself is better for society."

Jails need the ability to assess and treat inmates who are at risk, experts agreed.

"Jails have to assume that one of their central responsibilities is identifying and responding to suicide risk," Singer said.

The report was published Jan. 23 in the Journal of the American Academy of Child and Adolescent Psychiatry.