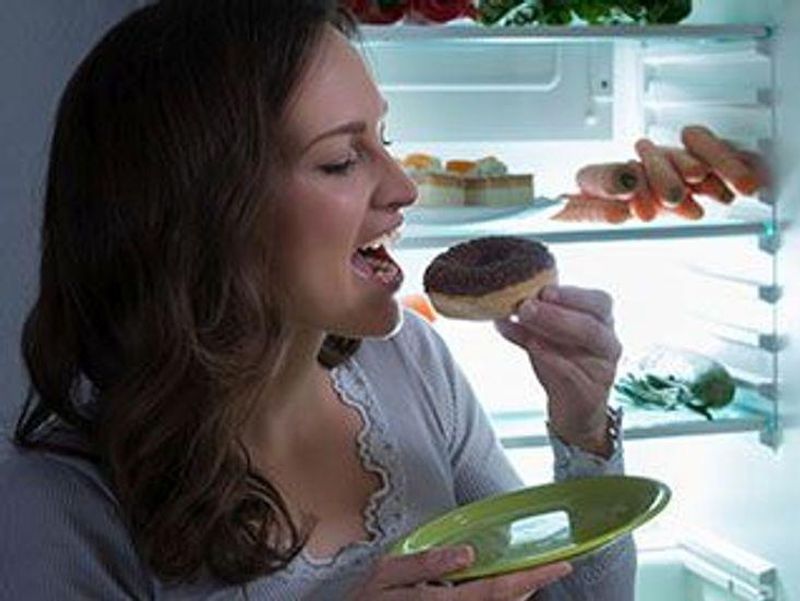 Two Common Eating Habits That Can Really Pile on Pounds

The portion of food that you put on your plate and how fast you eat it could determine how much you're eating -- or potentially overeating.

A new study found that when people were given larger portions of macaroni and cheese for lunch, they ate more, as much as 43% more when the portion size was increased by 75%.

"I think both of our main findings have implications for health and how much we eat. And one step further, weight maintenance and weight gain," said study author Paige Cunningham, a doctoral student at Pennsylvania State University.

The researchers gathered 44 men and women for a weekly lunch for four weeks, giving them different-sized portions of macaroni and cheese in random order, served with water. They videotaped the meals so they could assess the speed at which participants ate, as well as the size of their bites.

Study participants ranged in age from 18 to 68 years old. About two-thirds were women. About 45% were overweight or obese.

The speed of eating didn't change with bigger portion sizes. The participants ate more when they ate faster or took larger bites, and also when they took more bites or ate for a longer time.

The reason for people eating more when they ate faster could be a matter of the body's response to how long food spends in a person's mouth.

Knowing that people eat more when their portion sizes are bigger, one recommendation is to be aware of the portions you're giving yourself. A person can also offset consuming more energy or calories than they need by choosing foods that have fewer calories per gram.

These can be water-rich foods, such as fruits and vegetables, said study co-author Barbara Rolls, professor in the nutritional sciences department in the College of Health and Human Development at Penn State.

Though slowing down eating might be an option for reducing overconsumption, it's hard to do, Rolls said, and some evidence suggests that eating speed is a genetically based behavior.


"I think it's clear that if people could be more mindful, slow down and pay attention, it could help them to eat less. But it's like all of the things around weight management, it's tough to actually get people to do it," Rolls said.

In her lab, they sometimes change the calorie density of food, reducing it by 30% without people noticing, Rolls said. They do this by mixing in more vegetables, using more herbs and spices and just a little bit less fat, but maintaining high palatability. People can make these little changes at home, too.

The research will be presented this week at the American Society for Nutrition virtual annual meeting. Findings presented at medical meetings are considered preliminary until published in a peer-reviewed journal. The research was funded by Jenny Craig, Inc., and the U.S. National Institutes of Diabetes and Digestive and Kidney Diseases.

"I'm honestly not surprised," said Dana Hunnes, an adjunct assistant professor in the Fielding School of Public Health at UCLA, who was not involved in the study. "There's been some data over the years that has indicated that as portion sizes have grown, people also tend to eat more."

It can take between about 15 to 20 minutes for your body to acknowledge you're getting full and starting to go through the digestion process, Hunnes said.

"It was interesting that they came to a conclusion that faster eating and larger bites also was related to eating more, but again that doesn't really surprise me because I think it's pretty well known that when people eat faster it takes longer to get full, and so therefore you tend to eat more and then larger bites, just bite for bite is getting more calories in," she said.

Hunnes, who advocates for a plant-based, whole foods diet said she doesn't like to see people be hungry when they're trying to trim their portions or eat healthier. She recommends piling your plate with low-calorie fresh vegetables, fruit and whole grains.

"That's a great start," Hunnes said. "You won't feel hungry because it's going to fill up your stomach."

The U.S. Centers for Disease Control and Prevention has more tips on eating for a healthy weight.