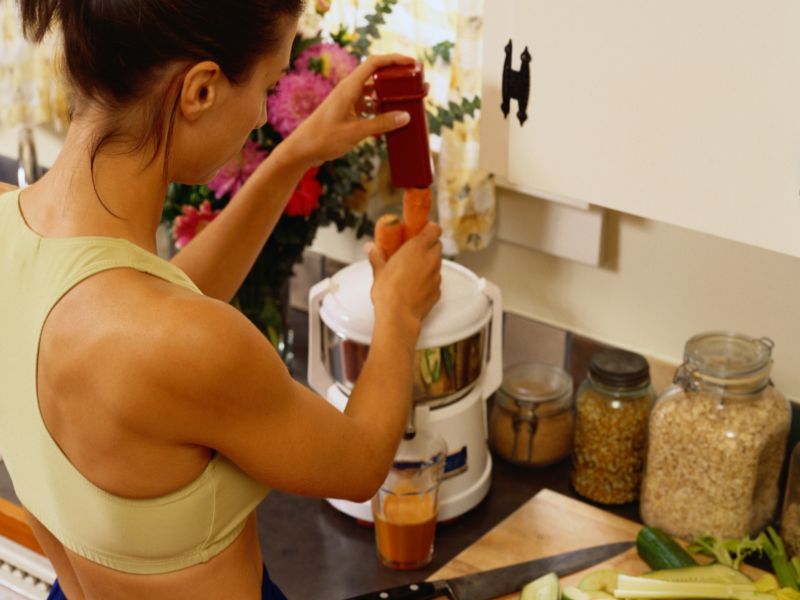 What's the Most Nutritious Way to Juice Your Vegetables?

Homemade juices are a popular way for health-conscious people to get their veggies. But the juicing method of choice makes a difference, a recent study suggests.

Researchers found that three different techniques -- using either a blender or a low- or high-speed juicer -- produced beverages with different levels of antioxidants and various plant compounds.

But anyone hoping for a simple verdict on the best buy is out of luck.

The nutrient findings were mixed, and no "winner" appliance emerged, according to senior researcher Bhimanagouda Patil.

"We're not making any recommendations on which method is best," said Patil, who directs the Vegetable and Fruit Improvement Center at Texas A&M University.

In general, the study found, both juicers beat the blender when it came to antioxidant activity and phenolics -- a broad group of plant compounds. Low-speed juicing, in particular, often churned out the highest concentrations.

But that also depended on the vegetable in question: With kale, for example, low-speed juicing clearly squeezed out the most phenolics. That wasn't the case, however, with beets or carrots.

Meanwhile, blenders were not always in last place. They performed well when it came to compounds called alpha-amylase inhibitors, which help control blood sugar levels after a meal.

Beyond that, the study assessed only a limited number of vegetables and plant compounds -- what Patil called "the tip of the iceberg."

The findings, published recently in the journal ACS Food Science & Technology, are based on analyses of 19 vegetables -- including various types of beets, carrots, cauliflower, kale and turnips.

Each was juiced by the three methods, which differ in how they transform solid veggies and the amount of heat they produce, for example.

On the other hand, high-speed centrifugal juicers pulverize vegetables and separate the juice from the pulp and fiber. Low-speed juicers also remove the pulp and fiber, but create less heat than the other two methods, particularly blenders -- which may explain the higher levels of plant compounds.

"Bottom line: Each method had a benefit over the other methods," said Sonya Angelone, a registered dietitian and spokeswoman for the Academy of Nutrition and Dietetics. She was not part of the study.

In the grand scheme of vegetable consumption, she said, whole foods are a better option than juices, as they contain more intact fiber.

"Fiber is important since it feeds the good gut bacteria that help keep you healthy," Angelone said. "And most people don't eat enough fiber to optimize health."

That said, she noted that juices made by blender do retain more fiber. And, she said, juices can be one way to get some vegetable servings or help "fill nutrient gaps."

Angelone added, though, that people should put limits on juicing fruit. "The juice is mainly sugar, which is high in calories without the benefit of all the vitamins, minerals, fiber and other healthy plant chemicals."

Patil said he, too, is a "strong proponent" of eating whole vegetables and fruit. But, he added, if people are turned off by the taste or texture of certain vegetables, juicing can be a more palatable way of getting them.

And based on these findings, Patil said, any of the three home methods will produce vegetable juices with "an array of health-promoting compounds."

The study was funded by the U.S. Department of Agriculture.

The Harvard School of Public Health has tips on fruits and vegetables.