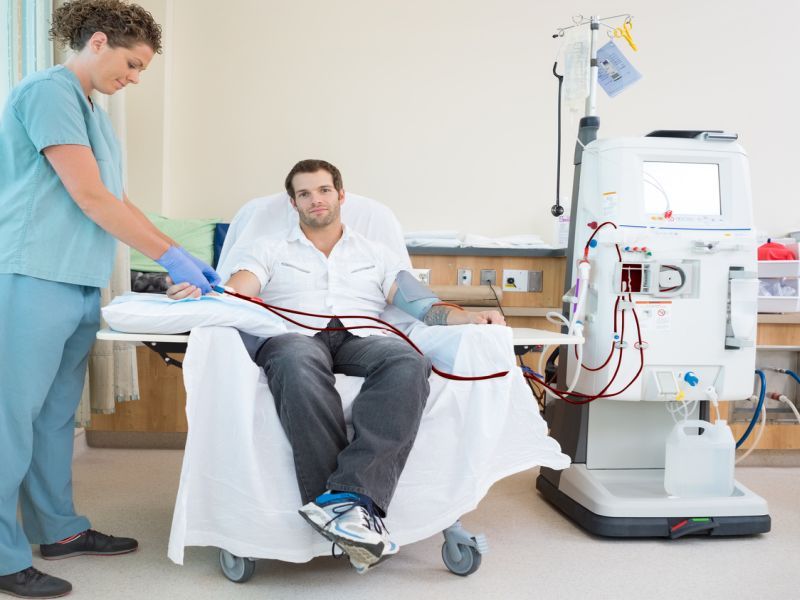 Stopping Common Heart Meds Could Be Risky for Kidney Patients

Patients with chronic kidney disease who stop using a class of common blood pressure medications may lower their risk for dialysis, but they also raise their odds of cardiovascular disease, a new study finds.

Not sure if you take one of these drugs? ACE inhibitors typically have "pril" as the last syllable in their name (for example, benazepril, captopril or enalapril) while ARBs typically end in "sartan" (candesartan, losartan and valsartan, among others).

"The use of RAS inhibitors in patients with advanced chronic kidney disease is controversial, and many doctors deprescribe them," study principal investigator Juan Jesus Carrero, professor at the department of medical epidemiology and biostatistics at Karolinska Institute in Sweden, said in an institute news release.

"Rather than routinely discontinuing treatment, our results show that the issue is a complex one and that doctors must carefully weigh the protective effects of RAS inhibitors on the cardiovascular system against the potential harms on the kidneys," Carrero said.

According to study first author Dr. Edouard Fu, "Small-scale studies have suggested that stopping RAS inhibitors in these patients may improve kidney function and delay the need for kidney replacement therapy. However, stopping these medications may also increase the risk of heart attacks, stroke and death." Fu is with the department of clinical epidemiology at Leiden University Medical Center in the Netherlands.

In their research, Fu and Carrero's team collected data on more than 10,000 patients with advanced kidney disease who were taking RAS inhibitors and were enrolled in the Swedish Renal Registry.

The researchers found that discontinuing the medications was tied with an 8% lower risk of needing a kidney transplant -- a good thing, of course. But weaning patients off the drugs was also linked with a 13% higher risk of death at five years, and a 12% higher risk of suffering a heart attack or stroke.

So what's a patient to do now, based on these findings? According to Carrero, more rigorous study may still be needed, and kidney patients should be monitored to make sure the drugs are of real benefit.

"Until clinical trials are performed, this evidence supports continued use of this lifesaving therapy in patients with advanced chronic kidney disease who are doing well on the medications," Carrero said.

Kidney specialist Dr. Maria DeVita is chief of nephrology at Lenox Hill Hospital in New York City. Reading over the findings she noted that, since the early 1990s, RAS inhibitors have been "the mainstay of treatment to delay progression of chronic kidney disease in patients with proteinuria" (high levels of protein in urine, a sign of kidney disease).

The drugs have undeniable benefits for patients but risks, too, she believes. "The question that has lingered is, where do these benefits end and the disadvantages rise?"

While the new study provides important information, DeVita agreed that the jury may still be out on how long patients with chronic kidney disease should take RAS inhibitors.

"This is a very important observation, but no clear conclusions can be obtained until we have randomized controlled trials to guide us," she said. "I feel that clinicians must consider the entire patient history whenever initiating, maintaining or discontinuing RAS inhibitors. We have to prioritize our goals of care not just once, but along the continuum of care as events tip the balance one way or the other."

The report was published online recently in the Journal of the American Society of Nephrology.

For more on kidney disease, head to the U.S. National Institute of Diabetes and Digestive and Kidney Diseases.