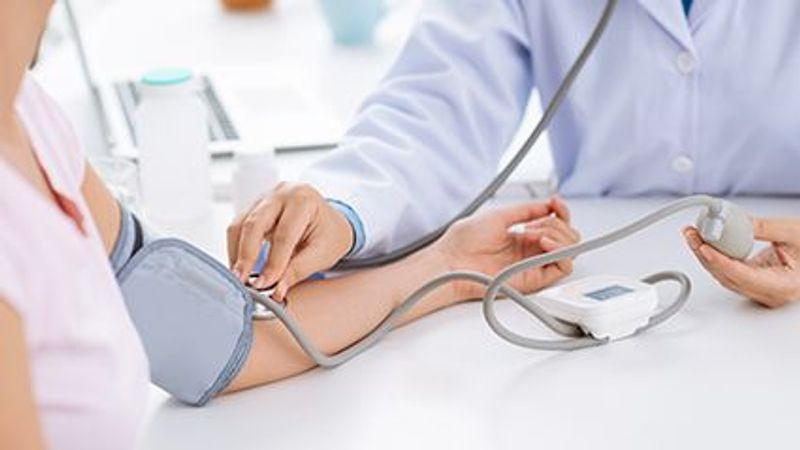 Blood pressure readings between the two arms can be different, and that disparity can sometimes be a warning sign of heart trouble down the road.

That's the finding of an analysis of 24 past studies: When people have at least a 5-point difference in blood pressure between the two arms, their risk of heart attack, stroke or premature death inches up. And the greater the difference, the more those risks climb.

Experts said the findings give more support to something that's been advocated, but not commonly done by doctors and nurses: Checking patients' blood pressure in both arms.

"Unfortunately, blood pressure is not routinely measured in both arms," said Dr. Jeffrey Berger, a cardiologist who was not involved in the study. "But I think it should be."

Berger directs the Center for the Prevention of Cardiovascular Disease at NYU Langone Health in New York City. He said he always checks blood pressure in both arms, and thinks it should be a matter of routine in all patients.

"It's such a simple thing to do," Berger said.

It's not that the blood pressure difference, itself, is the problem. But a discrepancy between arms might be a sign of early atherosclerosis that is developing asymmetrically, Berger explained.

Atherosclerosis refers to a hardening and narrowing in the arteries that, eventually, could lead to heart disease or stroke.

There's no way to "fix" between-arm discrepancies, but that's not the point, said Clark, a clinical senior lecturer at the University of Exeter Medical School in the United Kingdom.

Instead, he explained, doctors can consider between-arm differences one "marker" of a patient's heart disease risk.

And then what? Berger said it depends on a patient's overall health. Eating more healthfully and getting regular exercise is always wise, he said, but some people might need medication, like a statin, to ward off cardiovascular trouble.

The findings, published online Dec. 21 in the journal Hypertension, are based on 24 studies from around the world, involving almost 54,000 adults in all. Over 10 years, 11% had a fatal or non-fatal heart attack or stroke.

It's normal, Clark said, to have a few points of variation in blood pressure between the two arms -- due to anatomy and the fact that one hand is typically dominant.

"Our interest was to identify when that difference is large enough to be regarded as signifying more than this," Clark said. "When is the difference large enough to suggest a change in the arteries that might signify additional risk of strokes or heart attacks?"

Overall, his team found, people's risks started to climb when the two arms showed at least a 5-point difference in systolic blood pressure (the "top" number in a blood pressure reading).

For each 1-point increase, the risk of dying from heart disease causes in the next 10 years rose by 1% to 2%. Meanwhile, the odds of suffering a first-time heart problem or stroke also crept up.

Those increases were small, but the researchers said that a 10-point difference in systolic pressure between arms should be considered the "upper limit of normal."

Between-arm differences are more common in people with high blood pressure, Clark said, but people with normal readings can have them, too.

The phenomenon matters more for someone with high blood pressure or other risk factors, like diabetes and high cholesterol, he added.

Berger said that it's not clear why so few health care providers measure blood pressure in both arms.

"This is not a new finding," he said of the current study. "It's been shown many times."

For now, Berger suggested patients ask questions the next time they have a blood pressure check: If it's not being done in both arms, why not?

As for home blood pressure monitoring, he said, if people repeatedly detect a significant difference between the arms, they should tell their doctor.

Clark was also in favor of doctors checking both arms, at least once -- in part to get a more accurate gauge of patients' blood pressure. If one arm has a higher reading, he said, then future measurements should be taken on that arm.

The American Heart Association has more on blood pressure readings.