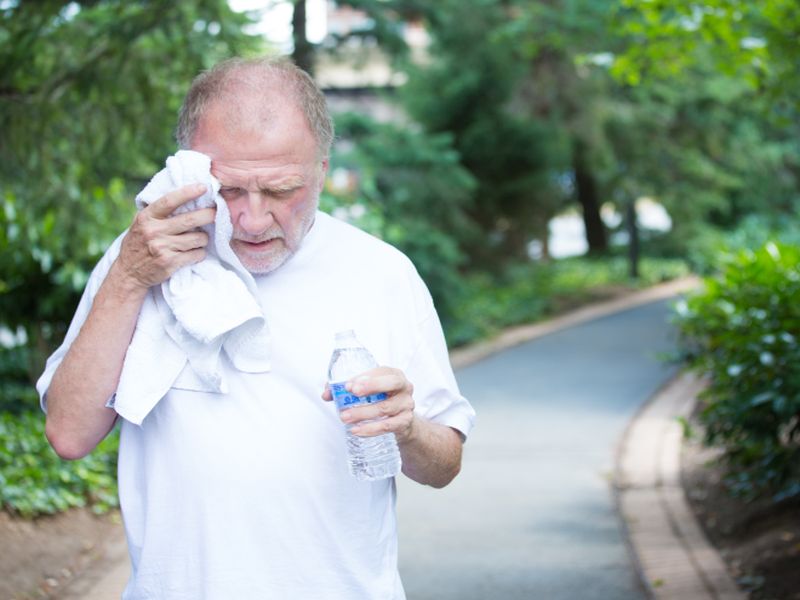 Can working or playing in the hot sun "fry" your brain?

Yes, claims a new, small study that found too much heat on the head hampered thinking in volunteers.

Most people know that high temperatures can cause heat exhaustion or heat stroke as the body's core temperature becomes dangerously high, but the beating sun can affect your brain even if your body temperature stays normal, researchers report.

"Solar radiation has a separate, direct effect on people's capacity to perform functions that require thinking and coordination, even if the person is not overly hyperthermic, simply because their head is exposed to high solar radiation," said researcher Andreas Flouris, an associate professor in the department of exercise science at the University of Thessaly in Volos, Greece.

According to the study, prolonged exposure to the sun can impair motor and cognitive performance even as the body reaches 101 degrees F, which is a degree lower than previously reported.

This implies that outdoor workers are affected when working under the sun, even when they do not reach high levels of hyperthermia, Flouris said.

"This may explain the increased accidents during labor-intensive jobs in the summer. It also impacts the way we calculate the economic effects of climate change, suggesting that existing economic models may have underestimated the impact on that aspect," he said.

For the study, Flouris and his colleagues tested the mental abilities of eight men aged 27 to 41 while they worked on computers and were exposed to direct heat exposure from lamps aimed at their head and back.

Heat affects thinking by undermining the way the nervous system works, Flouris explained. "As a result, heat reduces the speed at which information is transferred -- whether that relates to thinking or moving the muscles," he said.

For people working under the sun, it is very important to limit exposure of the head, he said. "A good hat or a helmet will certainly protect the head from these effects of solar radiation," Flouris suggested.

For policymakers and scientists, it is vital to include and account for the effects of solar radiation independently of hyperthermia when projecting the effects of climate change, he added.

The report was published June 16 in the journal Scientific Reports.

Dr. Sanjey Gupta is chair of emergency medicine at Southside Hospital in Bay Shore, N.Y. He said, "Even though our brain is very well-protected under a layer of hair and skin and bone, heat right to that area might be superficial heating of the brain, and maybe that heat is actually going through those layers and heating the surfaces of the brain that are in contact with the skull."

This effect may become even more serious as the planet warms, Gupta said.

This highlights a worldwide problem as a lot of people are exposed to sunlight all the time. "Now we know that direct sun exposure to the brain might cause some neurologic symptoms and we need to recommend that people should protect themselves from direct sun exposure," he added.

Wearing a hat is probably the simplest step you can take, Gupta said. Also, wearing sun-protective clothing can help ward off the harmful effects of UV radiation.

It might also help if the hat has a place to put an icepack that can keep your brain cool as you work or play in the heat, Gupta said.

Gupta said that if you begin to feel the effects of the sun, like feeling overheated or dizzy, get into the shade or indoors and drink plenty of water.

For more on the effects of heat, head to the U.S. National Institute of Environmental Health Sciences.