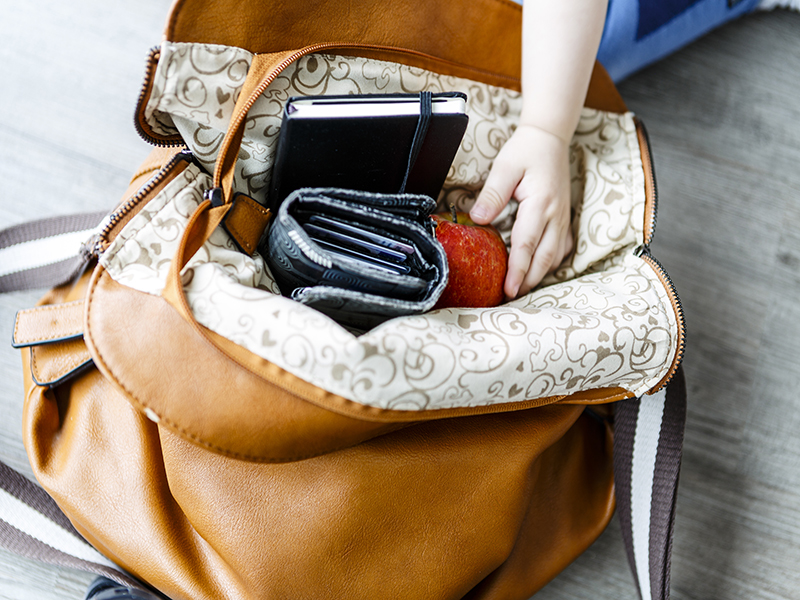 Busy moms and dads routinely stuff their purses and bags with every item their family might need for the day. But that creates a minefield of choking and poisoning hazards for babies and toddlers, pediatricians warn.

A purse, backpack or diaper bag can contain a hodgepodge of medications and supplements, cosmetics, hand sanitizers, candy, coins and other items that attract little hands. That can also set the stage for accidents, sometimes deadly.

"Young children are all inquisitive explorers," said Dr. Eric Owen Tyler, a pediatrician and executive board member of the American Academy of Pediatrics (AAP) Alabama Chapter. "And mom's purse is like a gold mine."

Tyler said that over the course of his career, he has seen toddlers who have swallowed iron pills or pain medications, which can damage the kidneys or liver, or cause fatal overdoses. Some have even gotten their hands on birth control pills.

The case that "really sticks with me," Tyler said, involved a 2-year-old who managed to ingest her grandmother's heart medication. The toddler died seven days later.

Even when parents are mindful of safe medication storage in the house, bags can be overlooked. Part of the issue, Tyler said, is that bags are packed and unpacked constantly, and switched out regularly -- and parents may lose track of what's inside.

"Something you hear a lot is, 'I just forgot it was in there,'" said Dr. Elizabeth Murray, a pediatric emergency doctor with the University of Rochester Medical Center in Rochester, N.Y.

Keeping bags away from curious hands is the safest bet. But there are also wiser ways to pack them, according to Murray.

"We always want medications to stay in the childproof container they came in," she said.

And make use of a bag's various compartments, Murray advised. If a young child knows her snack or sippy cup is always in a particular place, keep it free of all other items she should not touch.

Medications are an obvious risk to youngsters. But bags often contain other, less apparent hazards, according to Tyler. Cosmetics -- particularly nail polish and hair and skin care products -- can draw kids' attention and be swallowed or placed in the eyes.

Tyler cited statistics showing that between 2002 and 2016, almost 64,700 U.S. children under age 5 landed in the emergency room for injuries related to cosmetics.

Parents also need to be vigilant about any nicotine products, whether they be traditional cigarettes, electronic cigarettes or nicotine gum. Nicotine poisoning can make young children very ill, or even prove fatal.

Then there are firearms. It's not uncommon, Tyler said, for people to carry guns or other weapons in a bag. And in recent years, news reports have highlighted tragic cases where a toddler retrieved a gun from a bag and accidentally shot himself or someone else.

Certain situations can increase the risk to toddlers, Murray said. One is during holiday gatherings, when many people are in one place and it can be hard to keep track of little ones' every move.

Murray saw a tragedy like that play out: At a neighbor's holiday party, her friends' 9-month-old came across a methadone pill that had dropped to the floor, and swallowed it without anyone noticing.

Hours after putting her to bed that night, her parents found her dead. It turned out that the pill belonged to a relative who had visited the house.

Tyler said it's critical for everyone who is around a young child to be mindful of what's in their belongings, and to keep bags off the floor and out of reach.

The National Safety Council has more on childproofing your home.