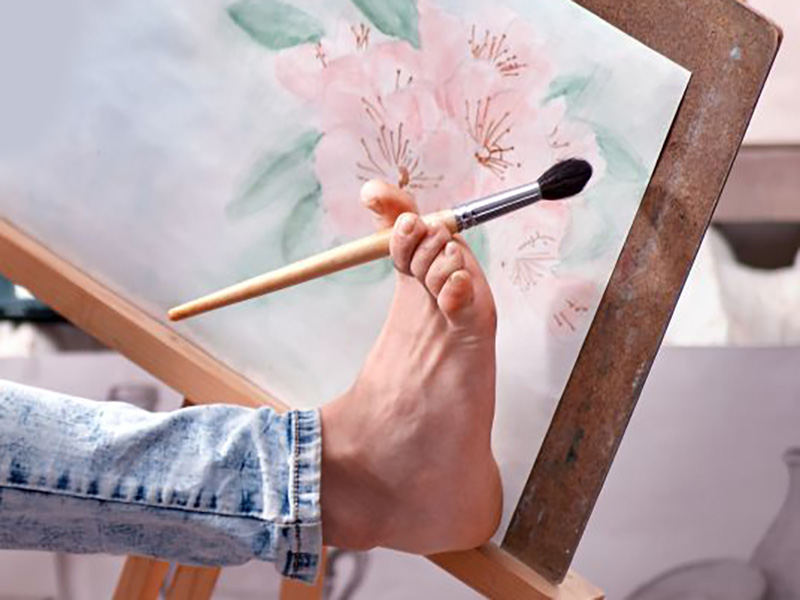 Toes Become Fingers in the Brains of 'Foot Painters'

If you use your feet like hands from birth, the brain will create a different "map" of the toes that's more like the one it has for the fingers, new research reveals.

That's the case with Tom Yendell and Peter Longstaff, two foot artists in the United Kingdom who were born with no hands and paint with their feet.

Researchers compared functional MRI images of their brains to images of nine people born with their limbs intact.

The investigators found that those who use their feet and toes to paint have a separate area mapped out in the brain for each toe individually. And the "toe maps" were found in the area of the brain usually reserved for fingers.

While the toe artists had a specific area in the brain mapped out for each toe, they struggled to move each toe independently. They did seem to have more sensory perception than people who don't regularly use their toes for tasks, the study authors noted.

"We think the unique toe maps that we found are facilitated by hand-like behavior from birth. The brain is much more plastic then," said study author Harriet Dempsey-Jones. She's from the Institute of Cognitive Neuroscience at University College London.

"We think any individual who has used their feet in highly dexterous ways would show these toe maps, even if they have hands," she said. But for people who lose limbs later, the brain might not adapt as well.

Dempsey-Jones said one reason the researchers believe early life is so important is that adults studied couldn't learn to use their feet in dexterous ways, even after intensive training.

The researchers also noted that the two foot painters didn't regularly wear shoes. Having bare feet most of the time would expose their feet and toes to more sensations. They also performed everyday activities with their feet, such as using cutlery or a keyboard.

Wesselink said the researchers would like to study at what ages brain plasticity allows for the changes in brain mapping, and when does it stop? They'd also like to study if it's possible for the brain's body map to incorporate artificial body parts.

Dr. Amit Sachdev is a neurologist at Michigan State University College of Osteopathic Medicine. He said these findings might not apply only to people born without hands or arms, but that people using alternate body parts to perform tasks from birth would probably be more adept at it.

"I would imagine that an amputee could learn how to use feet as hands, and their brain maps might similarly change. But adults never heal quite as well as kids," Sachdev said.

Dr. Ashesh Mehta, director of the Laboratory for Human Brain Mapping at Northwell Health in Manhasset, N.Y., said this study "expands our knowledge."

Mehta said it was particularly interesting that the foot and toes took over "the brain map real estate for hand input." Usually when an area is injured, the changes that take place are more orderly, he explained. The face and shoulder map areas are closer in the brain than the area for feet and toes, so he said he would expect those areas to "encroach on the finger real estate."

These findings could be helpful in trying to figure out how to harness the brain's ability to remap when people are missing limbs or have a spinal cord injury, Mehta suggested.

The study findings were published online Sept. 10 in Cell Reports.

Learn more about how your brain works from the U.S. National Institute of Neurological Disorders and Stroke.