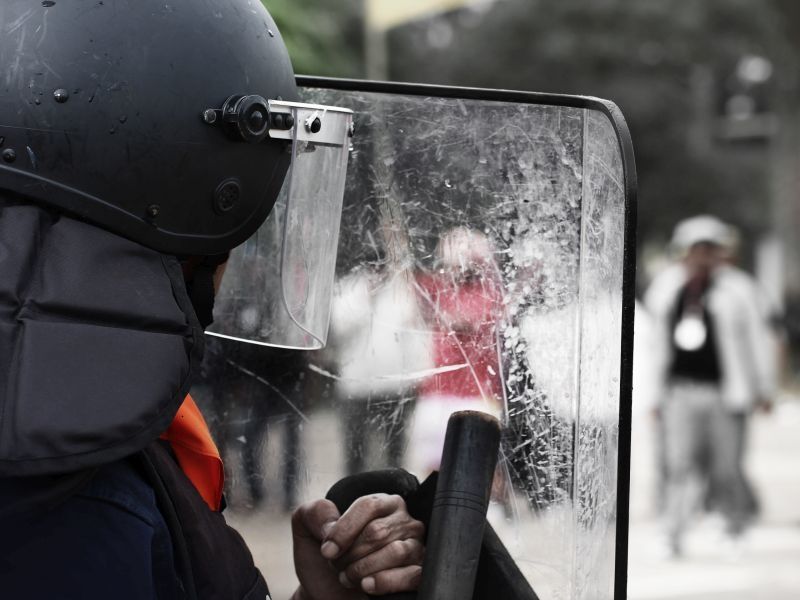 Last summer, the American Academy of Ophthalmology condemned the use of rubber bullets as a law enforcement tactic for crowd control during protests that rocked the United States. The argument: rubber bullets can cause serious eye injury.

Now, a new study backs up that concern, finding that the use of rubber bullets and pellets, pepper spray, tear gas and/or bean bag guns does, in fact, increase the risk for severe eye trauma.

"Compared to a regular bullet, rubber bullets are not intended to be used as a method of lethal force," explained study author William Bloom. "But rubber bullets can certainly cause serious eye injuries, and even death in some instances."

In the end, his analysis "found that these products certainly have the ability to cause serious injuries to the eyes,especially when used upon unsuspecting persons," he said.

"We also found that these products have historically resulted in a great number of emergency room visits over the 10-year period we evaluated," added Bloom, a second-year medical student at Chicago Medical School at the Rosalind Franklin University of Medicine and Science, in North Chicago.

Bloom acknowledged that it's not always the police at fault. "Many of the products used for crowd dispersion are also used by individuals for self-defense and recreational purposes," he noted, adding that his research "could not discern who actually caused many of the injuries presenting to United States emergency rooms."

And the study, which looked at eye injury data collected by the U.S. National Electronic Injury Surveillance System (NEISS) between 2010 and 2019, found evidence that eye injuries due to such projectile use are trending downward. For example, Bloom found that there were 178 such injuries in the NEISS database in 2010, compared with just 82 in 2019. National projections based on such figures further indicated that while there was an estimated high of 5,381 such eye injuries in 2012, that had dropped down to 2,642 by 2019.

Still, the American Academy of Ophthalmology's (AAO) condemnation came amidst burgeoning street protests all across the country, spearheaded by the Black Lives Matter movement. The latest study, published online Oct. 29 in JAMA Ophthalmology, did not extend into 2020 so it wouldn't show any possible rise in eye injuries as a result of the civil unrest.

Bloom doesn't speak for the AAO, but he believes the organization's statement reflects growing concern over "the recent civil unrest in cities across the United States, and reports of serious eye injuries caused by crowd control and dispersion products against peaceful protesters."

So, what can those who might be at risk for such injury do to protect themselves?

"As with any activity where there is potential for eye injury, wearing eye protection may minimize the risk," Bloom said.

"The AAO has released some great recommendations regarding eye protection and what to do in the event of an eye injury caused by rubber bullets, tear gas or pepper spray," he added.

As for whether it's appropriate to even use such crowd deterrents given the latest findings, Bloom said he hopes that the investigation drives home the message "that there is the potential for serious and permanent consequences associated with their use, and that this must be considered when making policy decisions."

Dr. Julia Haller, ophthalmologist-in-chief at Wills Eye Hospital in Philadelphia and author of an accompanying editorial, said the findings are "not surprising."

"These projectiles and chemical irritants can inflict significant damage on a delicate organ like the eye," she said. "Eyes are evolutionarily protected by orbital bones -- the eye socket -- and the lids. But the types of weapons discussed in this study can get past our defenses, especially with head-on, direct assaults."

Haller deferred to politicians and law enforcement regarding the necessity of their use, "[but] my career has been dedicated to saving every scrap of vision I possibly can, because I know how much it means to human quality of life. So, I would never advocate for putting that at risk."

Meanwhile, she stressed that, "absolutely, goggles and protective eyewear can make all the difference between vision and blindness. Remember not to touch or rub or pull anything out of your eye if you are injured. Try to put a shield or glasses or other protective barrier -- not compressing the eye -- over the eye, and seek immediate medical attention, preferably at a hospital with a specialty eye service. If toxic substances like pepper spray or other chemical irritants get into the eyes, flush them copiously with water or saline. And again, seek medical care."

There's more on rubber bullets and eye injury risk at the American Academy of Ophthalmology.