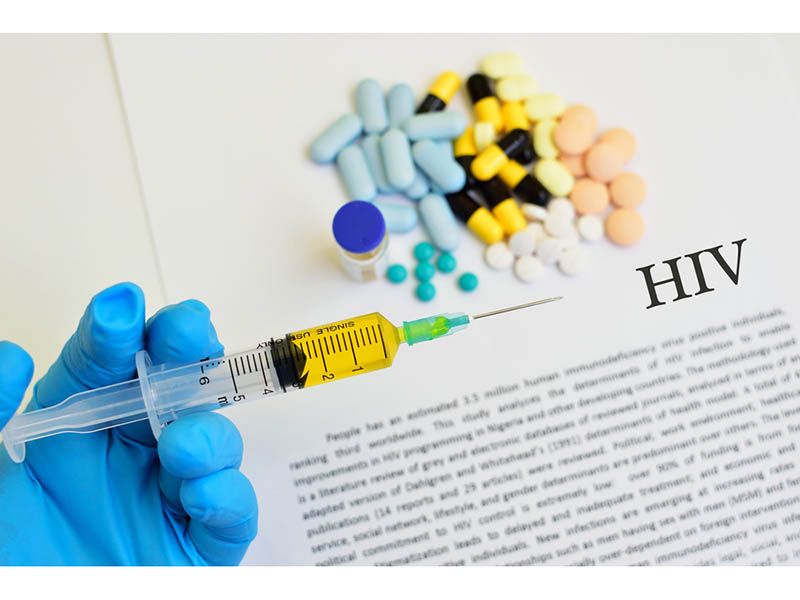 An antibody infusion being tested for preventing HIV does not seem to thwart most infections -- but its success against certain strains of the virus suggests researchers are on the right track.

That's the takeaway from a clinical trial that put the antibody, called VRC01, to the test in 2,700 people at high risk of contracting HIV.

Researchers found that infusions of the antibody every two months did not lower patients' risk of HIV infection overall.

But the tactic did block specific HIV strains that were susceptible to the VRC01 antibody: It cut people's risk of those infections by 75% over the 20-month trial.

Lead researcher Dr. Lawrence Corey described the results as an "important proof of concept" that the antibody approach can work.

But, HIV being the formidable foe it is, a single antibody is just not enough, explained Corey, a virologist and professor at the Fred Hutchinson Cancer Research Center in Seattle.

He likened the situation to HIV treatment. In the 1980s, the drug AZT was found to be effective at blocking HIV, but over time was little match for the rapidly mutating virus. Researchers then discovered that powerful drug combinations, or "cocktails," could suppress HIV long-term.

The drugs are not a cure, but they transformed HIV from a certain death sentence to a manageable chronic disease.

And in fact, Corey said, researchers have suspected that for antibodies to prevent HIV infections effectively, similar cocktails will be necessary.

The current trial, he said, shows that VRC01 infusions can be done safely, and it gives detailed information on how well the antibody works against different HIV strains.

Dr. Rajesh Gandhi is an infectious disease specialist at Massachusetts General Hospital in Boston and chairman of the HIV Medicine Association.

He described the trial as a "door-opening study" that supports ongoing research into antibody cocktails.

"Just as it takes multiple drugs to treat HIV, it might take more than one antibody to prevent it," said Gandhi, who wasn't part of the study.

Right now, people at high risk of HIV -- through sex or injection drug use -- can significantly reduce that risk with a daily medication regimen known as PrEP.

"So the question might be: Why do we need antibodies if we have PrEP?" Gandhi said.

One reason, he explained, is that daily pills can be difficult to manage over time, and a long-acting alternative could make prevention more accessible.

In this trial, antibody infusions were given every eight weeks. But those intervals could potentially be extended, Gandhi said.

The study -- published March 18 in the New England Journal of Medicine -- involved two arms. One, in the Americas and Europe, recruited men and transgender people who have sex with men; the other involved women in sub-Saharan Africa.

Volunteers were randomly assigned to have either VRC01 infusions every eight weeks for 20 months, or placebo infusions.

Antibodies are produced by the immune system to identify and neutralize foreign invaders, like viruses.

VRC01 is a so-called broadly neutralizing antibody, or bNab -- meaning it can block a range of HIV strains from infecting human cells. It's able to do that because it recognizes particular HIV proteins that often remain unchanged even when virus mutates.

VRC01 was originally discovered in the blood of an HIV-positive patient. Corey said it's not clear why only certain people with HIV produce bNabs.

Scientists can create lab-engineered versions of antibodies and mass produce them, which is what they did for this trial.

Unfortunately, VRC01 was not as powerful against HIV strains in the trial communities as the researchers had estimated. The antibody completely blocked about 30% of strains, but was not potent enough against 70%.

If antibody cocktails prove effective, a big question is whether they would be preferable to daily pills. Both Corey and Gandhi said they could be, especially if they can be done less often -- twice a year, for example.

That's true in less-developed countries, too, they said. For women especially, Corey said, treatment at a clinic can be less stigmatizing than daily pills.

Antibody infusions are not the same as a vaccine. Vaccines train the immune system to recognize a specific virus and mount its own response should it encounter the invader.

But Corey and Gandhi said findings like these can inform ongoing HIV vaccine development -- by, for example, indicating the level of antibody neutralization that's needed to protect against infection.

The U.S. Centers for Disease Control and Prevention has more on preventing HIV with PrEP.