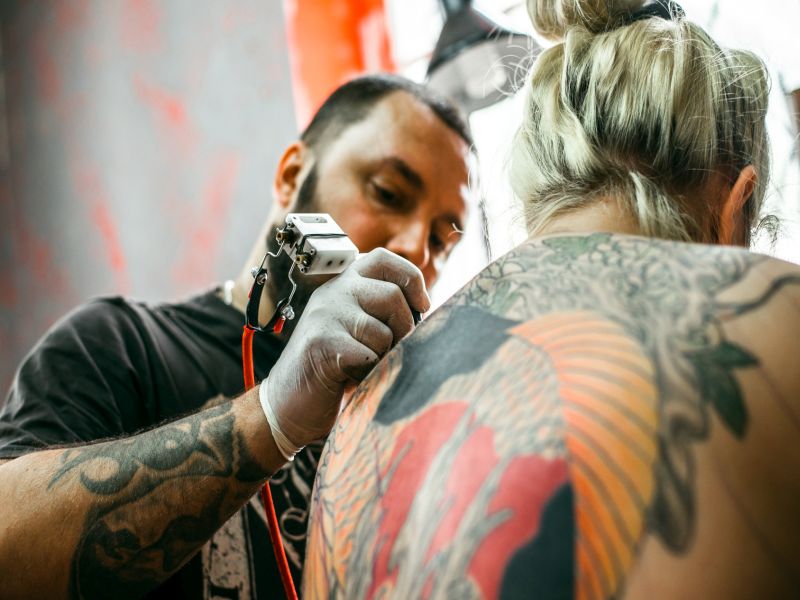 Using your body as a canvas for tattoos might come at a price for your health.

New research suggests that all that ink impedes natural sweating -- and that might cause the body to overheat.

One dermatologist unconnected to the study said the finding is potentially alarming.

Any tattoo-linked decline in sweating "may have important ramification when patients have fever or illness or are overheated and may have problems with thermoregulation," said Dr. Michele Green, a dermatologist at Lenox Hill Hospital in New York City. She believes that "more studies need to be done on this important observation."

The new research was led by Scott Davis of Southern Methodist University in Dallas. As he and his colleagues explained, sweating is the body's natural response to regulating body temperature. However, any damage to sweat glands within the skin may impair this response and boost the odds for overheating.

Prior research has found that tattooed skin has a higher concentration of sodium (salt) in sweat, which point to a reduced sweat gland function. And Davis' group calculated that the process of tattooing requires up to 3,000 skin punctures per minute -- injury that could result in sweat gland damage.

In their study, the researchers assessed sweating rates in the upper and lower arms of 10 people with tattoos, comparing at least 5.6 square centimeters of tattooed skin with adjacent non-tattooed skin.

To promote whole-body sweating, the volunteers wore a special suit that circulated hot water upwards of 120 degrees Fahrenheit for 30 minutes or more.

Tattooed and non-tattooed areas of skin began to sweat at about the same time in response to heat, which suggests that nerve signals to sweat glands do function normally in tattooed skin.

However, tattooed areas still produced less sweat, the researchers found. That suggests that sweat glands were, in fact, damaged during tattooing, according to the study published recently in the Journal of Applied Physiology.

They concluded that tattooing might hamper "sweat gland function and could be considered a potential long-term complication or side effect of this cosmetic procedure."

For her part, dermatologist Greene said that a possible decline in body cooling isn't the only damaging health effect of tattoos. Body ink can also raise a person's odds for skin infections and "granulomas," rash-like lesions that can form as the immune system reacts to a tattoo.

The U.S. Food and Drug Administration has more on tattoos.