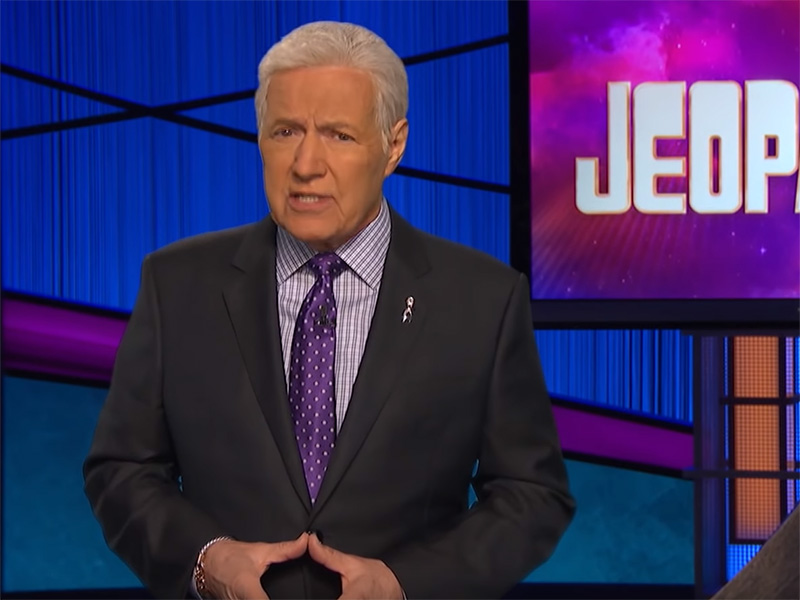 'I Wish I Had Known Sooner': Alex Trebek Issues PSA on Pancreatic Cancer

The aim of the video PSA is to "help raise global awareness of the risks and symptoms of pancreatic cancer," Trebek says, wearing a purple tie -- the color representing advocacy in the fight against the disease.

"I wish I had known sooner that the persistent stomach pain I experienced prior to my diagnosis was a symptom of pancreatic cancer," he notes in the one-minute video. "Other common symptoms can include mid-back pain, unexplained weight loss, new-onset diabetes and the yellowing of the skin or eyes."

The 79-year-old Trebek urges viewers to "join me in this fight" by wearing purple in November and spreading the word on social media about pancreatic cancer. Nov. 21 is World Pancreatic Cancer Day.

It's been a rocky road for Trebek since he first announced his diagnosis of stage 4 pancreatic cancer in March.

Two months later, he and his doctors announced that he appeared to be winning his battle against the disease. Trebek had responded incredibly well to treatments and was in "near remission," his doctors said in May.

"It's kind of mind-boggling," Trebek told People at the time. Even though the overall survival rate for pancreatic cancer is just 9%, Trebek responded well to chemotherapy.

"The doctors said they hadn't seen this kind of positive result in their memory -- some of the tumors have already shrunk by more than 50%," he told the magazine.

In late August, Trebek seemed to be doing so well that he returned to taping the 35th season of "Jeopardy!"

But his health again took a turn for the worse.

"Yup, [I] went all the way down to numbers that correspond with a normal human being without cancer," he told the Canadian television network CTV earlier this month. "[But] then all of a sudden, it blew up and went 50% higher than when it was first diagnosed. Go figure." So, Trebek resumed chemotherapy in September.

In the CTV interview, Trebek said he's still on the job -- but some days are tough.

On the day after a chemo treatment, his vision "gets messed up a little," Trebek told the network, and another day later joint pain can set in.

His treatment has also led to sores in his mouth that can interfere with speech, Trebek added.

For the time being, however, he said he'll keep hosting "Jeopardy!" "as long as my skills do not diminish."

He told CTV, "I'm sure there are observant members of the television audience that notice also, but they're forgiving. But there will come a point when they [fans and producers] will no longer be able to say, 'It's OK.'"

Trebek credits the warmth and support of fans for any inroads he's made against the cancer.

"I've got a couple million people out there who have expressed their good thoughts, their positive energy directed towards me and their prayers," he told People in May. "I told the doctors, this has to be more than just the chemo, and they agreed it could very well be an important part of this."

In addition, pancreatic tumors are particularly aggressive "due to a mutational profile that makes it resistant to therapies that work better for other tumor types," explained Dr. Angela Alistar. She directs gastrointestinal medical oncology at Morristown Medical Center, in Morristown, N.J.

Trebek is philosophical about his chances, and said death doesn't frighten him.

"I'm not afraid of dying," the 79-year-old told CTV. "I've lived a good life, a full life, and I'm nearing the end of that life -- if it happens, why should I be afraid of that? One thing they're not going to say at my funeral, as a part of a eulogy, is 'He was taken from us too soon.'"