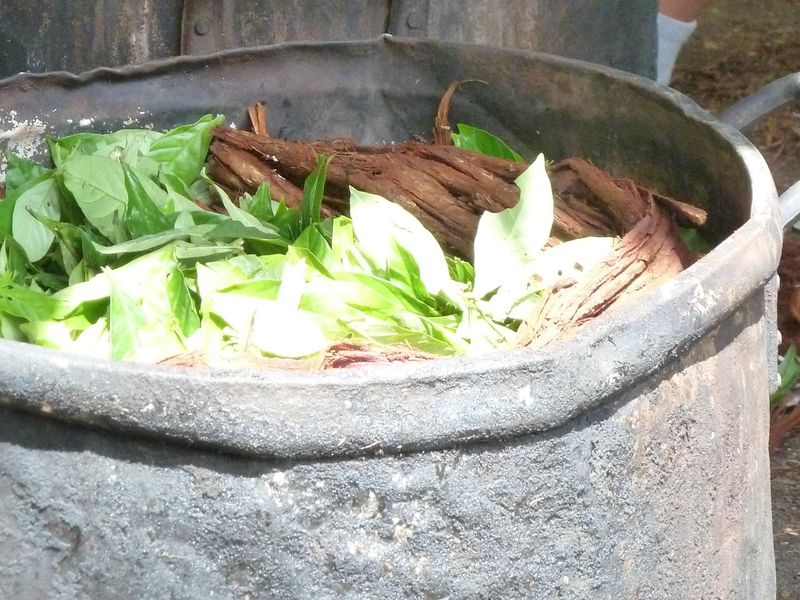 Is Mind-Altering Ayahuasca Safe? No, But Folks Who Try It May Not Care

Ayahuasca, a powerful psychoactive drug derived from a South American plant, is a traditional Amazonian-based medicine and an increasingly popular hallucinogenic brew used by devotees worldwide.

An international survey of thousands of men and women who have tried the drug for religious, therapeutic or recreational purposes provides some clues.

On the downside, the vast majority said the drug induced some significant side effects, ranging from nausea and vomiting to the onset of nightmares, disturbing thoughts and a feeling of disconnection.

On the upside, however, only a very small minority said they needed medical care to handle their physical discomfort.

And among those reporting psychological disturbances, nearly 9 in 10 said they were just part of an experience they considered beneficial.

"Ayahuasca has seen rapid growth in popularity over the last 15 years, via Western tourists heading to South America, and underground facilitated ceremonies being offered in alternative healing and spirituality settings in Western countries," said study author Daniel Perkins, an associate professor and senior research fellow at the University of Melbourne in Australia. "However, it remains fairly niche."

Generally, ayahuasca is a brownish-red drink with a strong taste and smell. The active drug it contains is considered a Schedule 1 drug in the United States, like heroin, and therefore illegal.

In most cases, Perkins said, it's taken in a controlled and monitored setting "as a therapeutic and spiritual tool." He said recreational or party experiences with ayahuasca are "extremely rare."

Adults in 50 countries responded to the online survey, which was conducted between 2017 and 2019. All had tried ayahuasca at least once; many had used it on multiple occasions.

On average, respondents were 40 years old, and about 46% were women. A majority were college-educated; most were married. Almost half lived in Brazil, where ayahuasca is relatively accessible.

A significant number said they had chronic mental health issues, including depression (19%); anxiety disorder (about 13%), or alcohol or substance abuse (each about 10%).

More than 8,200 respondents answered all the questions about negative physical side effects and just over 7,800 reported on negative mental health side effects.

Whether an individual had tried ayahuasca just once or many times, negative side effects were common.

Vomiting or nausea was most common, reported by 62% of respondents. In all, 18% reported headaches and 13% abdominal pain.

Only about 2% said they needed medical attention as a result.

"Challenging" psychological or emotional effects were reported by 55% of the respondents. Those included hearing or seeing things (29%); feeling alone or disconnected (21%); and/or having nightmares or disturbing thoughts (19%).

About 15% said they felt "energetically attacked" or a harmful connection with the "spirit world." And 13% said they had trouble distinguishing what is and is not real.

The twist: Many who experienced such side effects said they were only to be expected. They noted that ayahuasca is renowned for its ability to bring about "profound personal introspection, confrontation with usually avoided aspects of self, and revisiting of past traumas," Perkins noted.

"Almost 90% considered these challenges as part of a positive process of growth," he said.

Which begs the question: Do the pros really outweigh the cons?

Erin Bonar, an associate professor of psychiatry with the University of Michigan Addiction Center who reviewed the findings, said that really depends on whom you ask.

"It's human nature to view risks and benefits through our own lens or internal biases," she noted. "Rationalizing or distorting pros and cons of a choice or behavior is part of the human experience. So, it's entirely possible that some people, whether they've had a history with substance misuse or not, are minimizing the potential downsides of the risks or side effects of consuming ayahuasca."

Bonar said it's also possible that some are making a reasonable judgment that the long-term results they seek outweigh any temporary pain or discomfort related to ayahuasca use.

In some ways, she said, any debate about ayahuasca and concerns about addiction are inevitably going to differ from that involving other drugs.

“What is interesting about ayahuasca is the perception that some events typically classified in the medical field as adverse effects, or consequences, are actually desired or seen as essential to have a healing experience," Bonar said. "This flips that specific diagnostic criterion on its head."

So, even if folks are minimizing the downsides of consuming ayahuasca, this alone does not indicate an addiction disorder, she said.

Still, Bonar cautioned that those with a history of drug abuse should always consult with a doctor and keep their care team apprised of all substances they try.

The findings were published Nov. 16 in PLOS Global Public Health.

Learn more about ayahuasca at Australian Alcohol and Drug Foundation.