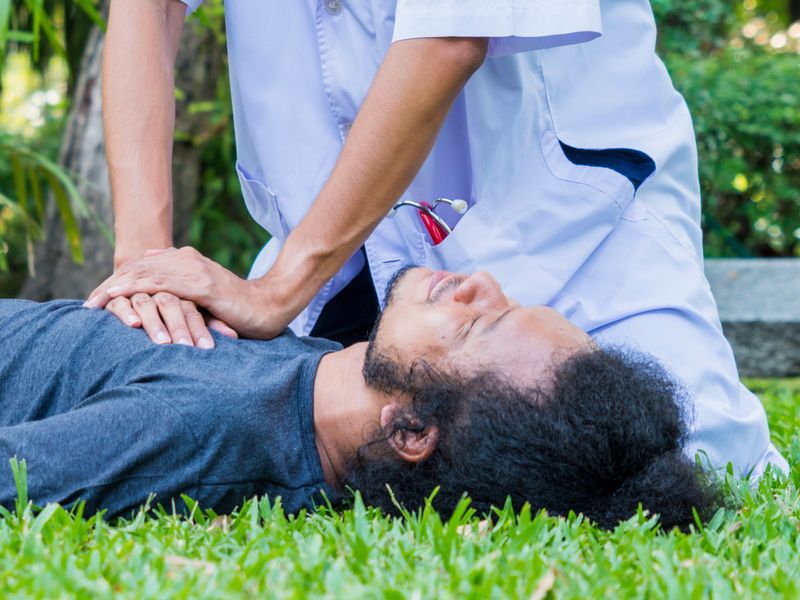 When someone collapses in front of witnesses, the chances of receiving potentially lifesaving CPR may partly depend on the color of their skin, a new study suggests.

Researchers found that when Black and Hispanic Americans suffer cardiac arrest, they are up to 37% less likely than white people to receive bystander CPR in public places and at home.

The reasons for the disparity are not certain, but there are potential explanations, said senior researcher Dr. Paul Chan, of Saint Luke's Mid America Heart Institute in Kansas City, Mo.

CPR trainings, he said, are less available in Black and Hispanic communities, and there are other barriers like cost, which may help account for the disparities in responses to at-home cardiac arrests.

But going into the study, the researchers expected that disparities would be lessened when cardiac arrests happened in public. With more people around, the chances that a bystander would be trained in CPR are greater.

Instead, the disparities were greater: Among cardiac arrests that happened at home, Black and Hispanic individuals were 26% less likely than white people to receive CPR. In public settings, that gap grew to 37%.

"That was striking. It wasn't what we expected to see," Chan said. "And it raises a lot of questions about why."

Unfortunately, bias -- conscious or not -- could play a role, said Chan and other experts. Bystanders may be less likely to "make assumptions" about a white person who collapses, versus a Black or Hispanic person, Chan said.

Disparities were not, however, confined to cardiac arrests that struck in white neighborhoods, he noted.

Across neighborhoods of all incomes, and even in those that were majority Black or Hispanic, white cardiac arrest victims were more likely to receive bystander CPR.

Cardiac arrest occurs when the heart suddenly stops beating normally, due to a problem in its electrical system. Usually, the person collapses into unconsciousness and stops breathing normally. It is quickly fatal without emergency medical treatment.

If a bystander immediately starts CPR chest compressions, that can keep blood and oxygen flowing in the victim's body until paramedics arrive. But in reality, only about 45% of Americans who suffer cardiac arrest outside of a hospital receive bystander CPR, according to the American Heart Association.

The new findings, published Oct. 27 in the New England Journal of Medicine, are in line with that statistic.

Chan's team used a large U.S. registry to find more than 110,000 cases of cardiac arrest where witnesses were present. Despite that, most victims did not receive CPR, with rates particularly low for Black and Hispanic people.

Such disparities were seen whether the surrounding neighborhood was mostly white, racially diverse, or majority Black or Hispanic, and whether it was high- or low-income.

"It's sad, it's heartbreaking," said Dr. Katie Berlacher, a member of the American College of Cardiology Health Equity Task Force and a cardiologist at the University of Pittsburgh.

Yet she also said she was not surprised. Even though more people are available to respond to a cardiac arrest in a public setting, Berlacher said, those people can have biases, conscious or not. Those biases, she noted, can affect how quickly they approach the person who collapsed, call 911 or try to find someone who knows CPR.

Dr. Anezi Uzendu has worked with the heart association in developing a "toolkit" for reducing disparities in cardiac arrest care and survival. He is also a cardiac arrest survivor, thanks in part to the action of bystanders who administered CPR after he collapsed, at age 25, while playing basketball at his gym.

"It can happen to anybody," said Uzendu, who is also a cardiologist with Saint Luke's but was not involved in the study.

Uzendu beat the odds, as cardiac arrest survival is low, at around 12%, according to the heart association. And studies show that survival is even lower for Black and Hispanic people, versus whites.

CPR can double or triple the chances of survival, and it's been thought that better access to CPR training could close the racial divide in cardiac arrest survival.

But the new findings indicate that CPR training is not the sole solution, Uzendu said.

That said, all three doctors agreed that greater access to CPR training could make a big difference -- particularly since an estimated 70% of cardiac arrests happen at home, where bias would presumably not be the issue.

One way to do that, Chan said, is by offering free or low-cost trainings at convenient locations such as churches or community centers in underserved neighborhoods.

Trainings should also involve people of color, Berlacher said -- from instructors to the actors in the course videos.

As for cardiac arrest survival, Chan's team found what previous studies have: Black and Hispanic people more often died. Of those who suffered cardiac arrest in public, just under 23% survived, compared with almost 32% of white people.

"CPR can make a huge difference in survival," Chan said.

The American Heart Association has more on learning CPR.