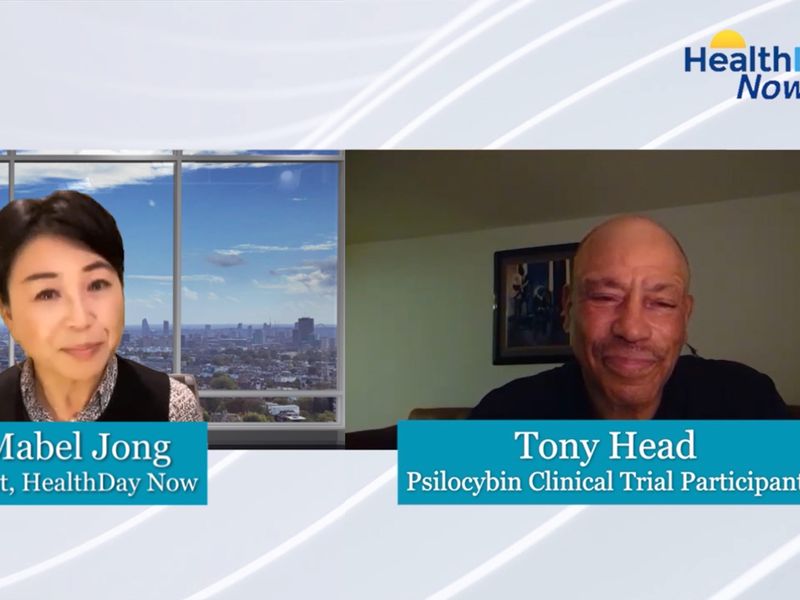 Tony Head was depressed and fearing death from stage 4 prostate cancer when, as part of a supervised scientific trial, he took a large dose of the psychedelic agent in "magic mushrooms," psilocybin.

Head donned a mask and headphones to shut out the world around him, and had an experience that changed the course of his life.

"At some point in that time I felt like a higher power or something -- I didn't see anything, I didn't see any type of image -- I felt like something connected and touched me and as soon as it did, I just started crying," Head, an award-nominated actor who lives in New York City, said in an interview with HealthDay Now.

He said the one-time therapy helped relieve much of the anxiety surrounding his prognosis.

"I think it taught me how to live better and not worry about dying," he added.

"I was blown away by what had just happened. It's an unimaginable experience, at least it was for me," Head added. "It's something that can't be explained, but I can tell you it is probably one of the most important things that ever happened to me."

Psychedelic therapy focused on psilocybin has garnered much new interest lately as a potential treatment against anxiety, depression and other mental ills.

In fact, the drug is now legal for mental health treatment in Oregon, a result of a ballot initiative. The recent release of Hulu's miniseries "Nine Perfect Strangers" has also focused fresh attention to the concept of microdosing psilocybin as a means of therapy.

It's a field that foundered in the 1960s as psychedelic drugs became associated with the left-wing counterculture, explained Dr. Charles Grob, a professor of clinical psychiatry and biobehavioral sciences with the UCLA School of Medicine.

However, prior to that, psychedelics like psilocybin had shown "great promise" in mental health research, Grob told HealthDay Now.

"In the '50s and '60s, there was a period of time when psychedelics were really considered the cutting edge of psychiatric research, and there was tremendous enthusiasm," Grob said. "There were reports of patient populations who did not respond well to conventional treatments that did very well."

Even Hollywood leading man Cary Grant turned to psychedelics during that early period. The actor took LSD as many as 100 times under the care of a Beverly Hills doctor, according to the documentary "Becoming Cary Grant."

"After weeks of treatment came a day when I saw the light," Grant said in the film. "When I broke through, I felt an immeasurably beneficial cleansing of so many needless fears and guilts. I lost all the tension that I'd been crippling myself with."

Now, a new generation of researchers are exploring the possibilities of these drugs to help people in crisis.

Head, 69, took his psilocybin trip as part of a research effort at Johns Hopkins University in Baltimore, after doctors had told him he probably had three to five years to live. Head has appeared in the HBO dramas "The Wire" and "The Deuce," and had a small role in the 2019 movie "Joker."

His psilocybin experience lasted for about seven hours, and during it he felt as though he had come into contact with a "higher power" existing in a place beyond death.

"The biggest thing I got out of this was it taught me how not to fear dying. I don't fear death. I don't want to suffer for years like that, but I don't fear death at all," Head said. "I think wherever death is or leads to, it's going to be a good place.

"I think it taught me how to live better and not worry about dying," he added.

Head says he also got everything he needed from psilocybin during his single high-dose trip.

Just how do psychedelics work their magic on the brain? According to Grob, psilocybin and its pharmaceutical cousins "profoundly alter our state of consciousness" by acting on certain receptors in the brain.

"It's an alteration of what's called the default mode network, where regions of the brain that normally are very much in communication basically briefly disconnect and create a greater sense of calm and less internal chatter, and perhaps more opportunity to perceive beyond what is normally within our field of awareness," Grob continued.

Research from the 1950s and '60s, as well as more recent studies, have shown psilocybin's promise in helping people like Head who are suffering an existential crisis, Grob said.

Psychedelics have also shown potential in people dealing with alcoholism and addiction, he added.

"Investigators observed dating back to the '50s that individuals with one powerful experience of a psychedelic, with one powerful altered state, appeared to have lost their craving and are able to establish and maintain sobriety," Grob said.

When use turns to abuse

The drug's promise does need to be weighed against its potential for abuse, however, Grob said.

"Going back to the '60s, there's no lack of examples of individuals who misused and abused the drug and got themselves into some serious situations which no one would want to replicate," Grob said. "There are inherent risks when this drug is ingested in uncontrolled settings, without proper facilitation by an experienced psychotherapist who is trained in administering this model."

Grob also noted that psilocybin and other psychedelics still require more research to fully understand their risks and benefits, given that academic study into the drugs fizzled out after the 1960s.

"We have today the opportunity to take a fresh look at these compounds, utilizing optimal conditions," Grob said. "We have the support of many high-level officials within academia. The regulatory agencies are far more receptive."

For example, there needs to be rigorously controlled studies to test the potential benefits of microdosing, the psychedelic treatment highlighted by "Nine Perfect Strangers," Grob said.

"It's still more in the realm of conjecture, and the positive reports we're hearing are essentially anecdotal case reports," Grob said. "These individuals do report on occasion a very remarkable transformation, remarkable therapeutic outcome, but we really don't know for sure whether this is a real phenomenon or a placebo effect."

Psilocybin has garnered more interest in modern research and therapy than LSD because it has a few advantages over the more powerful psychedelic, Grob said.

A psilocybin trip tends to be much shorter than with LSD, although it can extend to as long as six or seven hours. The trip also tends to be easier to guide, more visionary, and less likely to create anxiety or paranoia in the patient, Grob said.

People running these studies will need to seriously consider the patient's mindset and expectations and place them in a positive, carefully controlled setting, Grob said.

"You take all those factors into account, there's a good likelihood you can guide someone through this altered terrain in a safe manner and allow them to have the kind of experience that might endow them with the kind of insight and the kind of positive transformative experience that leads to therapeutic change," Grob said.

Head said that he can definitely see the potential of psilocybin to help treat people with addiction and other mental health issues, if it's used in a supervised way.

"This drug opens a door to put you in another place that you wouldn't normally be able to get to in your brain," Head said. "It has that kind of effect on you."

Johns Hopkins Medicine has more about its psychedelics research program.