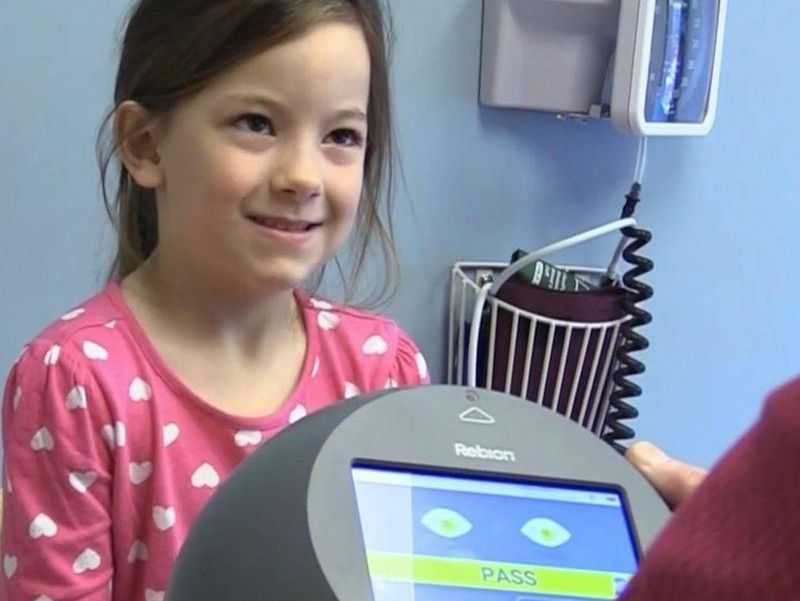 The answer to helping kids with "lazy eye" before it's too late could be a hand-held screening device, a new study suggests.

Amblyopia can't be treated with glasses or contact lenses after a child's vision reaches maturity, and without treatment, it can lead to poor school performance and impairments in depth perception and fine motor skills, doctors say.

"The findings suggest that pediatricians and other primary care providers could use the device to catch amblyopia at an early age when it's easier to treat," Dr. Michael Chiang, director of the U.S. National Eye Institute (NEI), said in an institute news release. He is director of the NEI, which supported development of the device. NEI is part of the U.S. National Institutes of Health.

For the study, researchers recruited 300 kids with no known eye disorders who were scheduled for visits to two Kaiser Permanente Southern California pediatric clinics. The children were between 2 and 6 years of age.

Two research associates who were trained to use the device screened each child. Then, a pediatric ophthalmologist who was unaware of results it generated examined each child's eyes.

"In the hands of a trained user, it takes 28 seconds to sit the child down, perform the test, and record the results -- provided that the child cooperates -- which is an important consideration for its adoption in busy pediatric care settings," said co-lead investigator Dr. Shaival Shah, a Kaiser Permanente pediatric ophthalmologist. The test itself requires 2.5 seconds of a child's attention.

Amblyopia is the leading cause of preventable single-eye vision loss and it's not uncommon, affecting 3 of every 100 kids in the United States. Basic eye chart vision screening tests are not useful in detecting the condition in very young kids.

During early childhood, the brain learns how to fuse images from both eyes into a single image to produce vision. But amblyopia develops when misalignment of the eyes or decreased sharpness in one eye interferes with the brain's ability to process visual information from both, causing it to favor one eye.

Treatment of amblyopia generally involves placing a patch over the good eye to improve vision in the weaker eye. Patching is less successful as kids get older.

The screening device assesses the eyes' ability to fixate together. A trained professional holds it 14 inches from the eyes and asks the child to focus on a smiley face. The device simultaneously scans both retinas, using a polarized laser that probes nerve fibers in an area called the fovea that is important for central vision.

Even a subtle misalignment of the fovea can make it hard for the brain to bring together the images from both eyes.

The study did not compare the device to existing photo-screening devices, which can help detect risk factors for amblyopia, but not amblyopia itself. This can result in both over- and under-detection of the disorder, according to the study.

The new scanner is a prototype of a device called blinq, which was cleared by the U.S. Food and Drug Administration in 2016.

The findings were recently published in the Journal of the American Association for Pediatric Ophthalmology and Strabismus.

The American Academy of Ophthalmology has more on amblyopia.