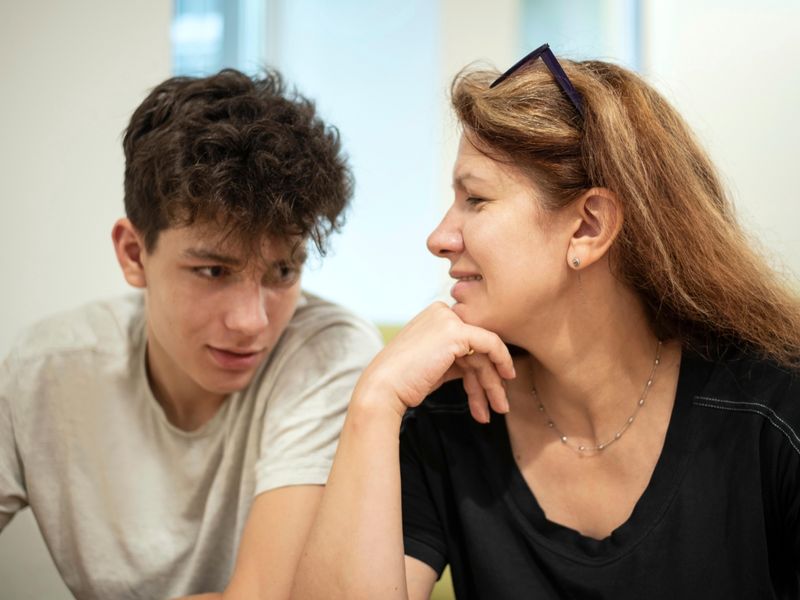 Mom's voice may be music to a young child's brain, but the teen brain prefers to change the station, a new study finds.

Past research using brain imaging has revealed how important a mother's voice is to younger children: The sound stimulates not only hearing-related parts of the brain, but also circuits involved in emotions and "reward" - in a way strange voices simply do not.

The new study, published April 28 in the Journal of Neuroscience, shows that things start to change around the age of 13. At that point, the brain's vocal preferences shift, tuning mom out in favor of unfamiliar voices.

That may ring true to anyone who has ever raised a teenager.

"Most parents can tell you how their teenagers begin to focus their attention on peers and new social partners," said Abrams, a clinical associate professor of psychiatry and behavioral sciences at Stanford University School of Medicine, in California.

"What's new here is this understanding of what's happening in the brain," he said.

So, if it seems like your teenager is tuning you out, that may well be the case. But, Abrams said, "it's not personal. This is a natural part of development."

The findings build on a 2016 study by the Stanford team showing that unlike strangers' voices, the sound of mom's voice "lights up" reward centers in a younger child's brain. That makes sense, Abrams said, as parents are the center of a child's world - their primary source of learning, which includes social and emotional development.

But at a certain point, he said, kids need to expand their social world, getting ready for independence and eventually starting their own family in many cases.

Enter the new study, which included 46 kids, aged 7 to 16, who underwent functional MRI scans. It allowed the researchers to view their brain activity while they listened to recordings of either their own mother's voice or unfamiliar female voices.

It turned out that teenagers were clearly distinct from younger kids. Their brain reward centers lit up more in response to the unknown voices versus mom's - as did a brain region called the ventromedial prefrontal cortex, which places value on social information.

So do those brain changes happen first, or does the brain adapt in response to kids' growing social circles as they get older?

It's likely the brain is "programmed" to make the evolution, said Moriah Thomason, an associate professor of child and adolescent psychiatry at NYU Langone Health, in New York City.

"Adolescence is a time when we prepare to leave the nest and become adults," said Thomason, who was not involved in the research. "If there weren't some amount of biological programming, that would be maladaptive."

Like Abrams, she said the findings offer an understanding of the brain basis for an aspect of teen behavior that's well known to parents.

"This might help parents contextualize it," Thomason said. "This is a natural part of maturation."

Abrams agreed that changes in the brain's voice preferences likely come first. That would be in line with evidence of broader shifts in the teenage brain's reward system, where it becomes more responsive to things like novelty and risk-taking.

The study also found that in various other ways, teenagers' brains became more responsive to all voices, including mom's, compared with younger kids. Brain areas involved in filtering information and creating "social" memories, for example, became more active the older a teenager was.

Thomason speculated that might all reflect the need to develop more sophisticated ways of understanding and interpreting verbal communication as people move from childhood to adulthood.

To Abrams, the study also underscores the broader importance of voice to human beings. Just think about any time you've become emotional from hearing the voice of a loved one you haven't spoken to in a while, he said.

It's different from a text message, Abrams pointed out.

"Voices are among the most important social signals we have," he said. "They connect us, and help us feel we're part of a community. And I would argue that hearing a loved one's voice is one of the most rewarding experiences we have in our daily lives."

The Child Mind Institute has advice on communicating with your teenager.