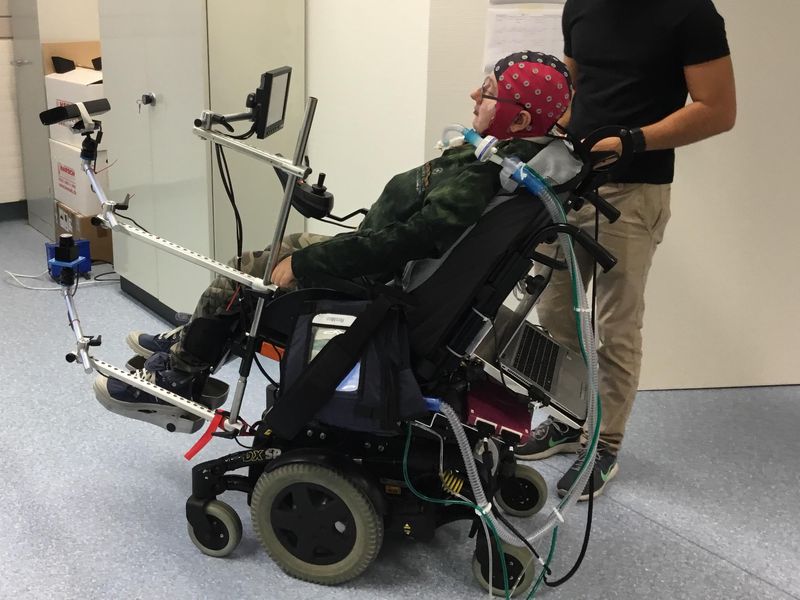 A severely paralyzed person no longer needs to go through brain surgery to try and steer a motorized wheelchair with their mind, researchers report.

Through an electrode-studded cap placed on their head, several people with quadriplegia -- no function in all four limbs -- were able to produce brain waves that guided their wheelchair through a kind of hospital "obstacle course."

The cap captures a person's brain signals, which are translated into the wheelchair's movements through a computer program, explained senior researcher José del R. Millán, a professor of neurology and chair of electrical and computer engineering at the University of Texas at Austin.

The patient simply thinks about moving the body parts they no longer control -- an arm or a hand, a leg or a foot.

"This intent will be translated into the actual commands for the motors of the wheelchair that will make the wheels move at different speeds so that if one is faster than the other, then it will turn into that in the opposite direction," Millán said. "So if the right is faster than the left, it will automatically turn towards the left and the other way around."

In this way, two of three quadriplegic volunteers eventually learned how to steer their wheelchair across a cluttered hospital room, swerving to avoid objects using nothing but their thoughts, according to a new research published Nov. 18 in the journal iScience. The authors provided a short video of a user guiding the wheelchair through rooms:

Efforts to develop a mind-controlled wheelchair have been underway for a decade and a half, noted Dr. Anthony Ritaccio, a professor of neurology at the Mayo Clinic in Jacksonville, Fla.

But up to now people have had to undergo brain surgery to try to drive a wheelchair with their minds, using electrical leads implanted into the motor regions of their brains.

"This is probably the first small study to achieve quite good success without having to enter the brain," said Abbey Sawyer, a postdoctoral researcher in the Abilities Research Center at the Icahn School of Medicine at Mount Sinai in New York City. "There's much more invasive approaches which are entering safety and feasibility stages of human trials at this point, but this is one of the first and probably one of the most successful of a noninvasive approach."

Ritaccio said the effort is significant.

"This is an important step, because if you can find a way to do this that doesn't involve the benefit/risk ratio of the neurosurgical procedure and the permanent introduction of electrodes in the brain, why wouldn't you take it?" he said.

The study also demonstrates that both the computer that interprets the brain signals as well as the signals being emitted by the person can adapt and work better together over time, Millán said.

"The main point of the paper is that if we train people sufficiently long, they can achieve a certain level of control of a sophisticated device like these brain-controlled wheelchairs," Millán said.

The noninvasive approach is "more difficult because most of the rich signal and detail that algorithms can easily detect and use is filtered by the skull and doesn't get out to the surface," Ritaccio said.

In the first training session, the three volunteers accurately steered their chairs around 43% to 55% of the time.

But over the course of training, one participant became able to drive his wheelchair with 95% accuracy, and another with 98% accuracy.

This was due to improvements in the computer's ability to discriminate brain activity patterns encoded for either "go left" or "go right."

But it also appeared that the participants themselves had a hand in this improvement, learning how to better produce the exact thoughts that guide the wheelchair, Millán said.

Their EEG readings showed clear shifts in brain wave patterns as they got better at steering.

"Essentially this happens in any domain of our life, whenever we want to learn a new skill," Millán said. "We need to practice, and there are people who learn faster because they have a better facility for that kind of skill."

The third participant had no significant changes in brain activity patterns throughout the training, and his accuracy increased only slightly.

At the end, the other two were able to successfully steer their wheelchairs through an obstacle-laden hospital room. The third could not.

This suggests that tweaking the computer program will not be enough to successfully maneuver a mind-controlled wheelchair, Millán said. The patients themselves also will have a hand in figuring out how to drive it.

The team next plans to figure out why the third participant wasn't able to get the hang of steering the chair, comparing brain signals of all three to figure out the differences.

Even though a number of teams are working on this sort of technology, it's going to be a while yet before this sort of mind-controlled wheelchair is commercially available, Ritaccio and Sawyer said.

"It's definitely still in its infancy in terms of where we're at with these studies," Sawyer said. "There's still a lot to learn in this space."

For example, the brain waves emitted by patients with a spinal cord injury might be different from people paralyzed by stroke or ALS or multiple sclerosis, she noted. Researchers will have to suss out those differences and adapt the computer program to them.

"This is paving the way, but I think we have a long way to go until we can roll this out really effectively in our environment," Sawyer said.

Ritaccio added that fitting electrodes to a head remains technically challenging, even when they've been placed in a cap.

"There's no pragmatic, adaptive way for people to do this themselves, and the training is quite intensive, so I don't think it's quite ready for prime time," he said. "People are still working to make it easy and applicable, because otherwise, why would it take decades? It would have been on the market already."

There's also the matter of whether this sort of wheelchair is widely needed, Ritacco added.

Most people with paralysis are not completely locked into their bodies, and are able to manage some residual movement that can be translated into commands for adaptive devices.

"Even if you have a little residual movement in one digit, you can operate a wheelchair with a joystick better than any [brain-computer interface] ever invented to date," Ritaccio said, noting that even Stephen Hawking could steer his wheelchair -- not to mention writing scientific papers on black hole physics -- by twitching one digit.

The Cleveland Clinic has more about paralysis.