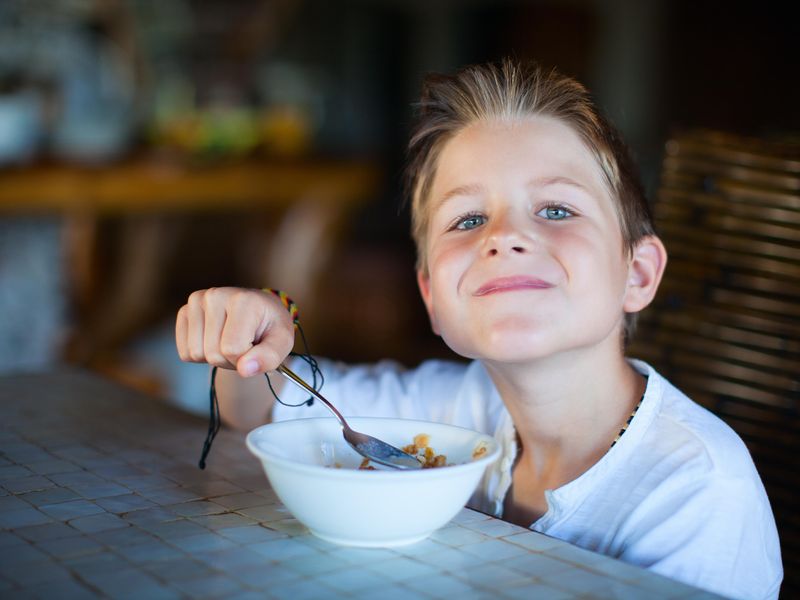 Breakfast Might Be Good for a Child's Emotional Health, Too

What your kids eat for breakfast and where they eat it could matter for their social and emotional health.

That's the upshot of a new nationwide study from Spain that concluded that eating breakfast away from home was almost as detrimental as skipping the meal altogether. Researchers said this could be because meals away from home are often less nutritious.

"Our results suggest that it is not only important to eat breakfast, but it's also important where young people eat breakfast and what they eat," said first author Dr. Jose Francisco Lopez-Gil, of the University of Castilla-La Mancha in Cuenca, Spain.

"Skipping breakfast or eating breakfast away from home is associated with increased likelihood of psychosocial behavioral problems in children and adolescents," he said.

Certain foods such as processed meat were associated with higher risk of problems in these areas, while dairy products and cereals appeared to lower the odds, Lopez-Gil said.

For the study -- published Aug. 23 in Frontiers in Nutrition -- researchers examined data from a 2017 survey of parents and guardians in Spain. The survey included questions about kids' breakfast habits as well as their psychosocial health, including factors like self-esteem, mood and anxiety. The results included 3,772 children in Spain between the ages of 4 and 14.

Coffee, milk, tea, chocolate, cocoa, yogurt, bread, toast, cereals and pastries were all associated with lower odds of behavioral problems. Eggs, cheese and ham were linked to an increased risk of such problems.

While the study was limited to Spain, the findings are consistent with other research. The availability of nutritious breakfasts in schools is likely to influence results in some areas.

But other factors, such as family support that young people can receive at home during breakfast, may also play a role in the observed benefits. The authors said more research is needed to understand the cause-and-effect relationships.

"The fact that eating breakfast away from home is associated with greater psychosocial health problems is a novel aspect of our study," Lopez-Gil said in a journal news release.

"Our findings reinforce the need to promote not only breakfast as part of a healthy lifestyle routine, but also that it should be eaten at home," he said. "Also, to prevent psychosocial health problems, a breakfast that includes dairy and/or cereals, and minimizes certain animal foods high in saturated fat/cholesterol, could help to decrease psychosocial health problems in young people."

The U.S. National Library of Medicine has a collection of recipes for a healthy breakfast.