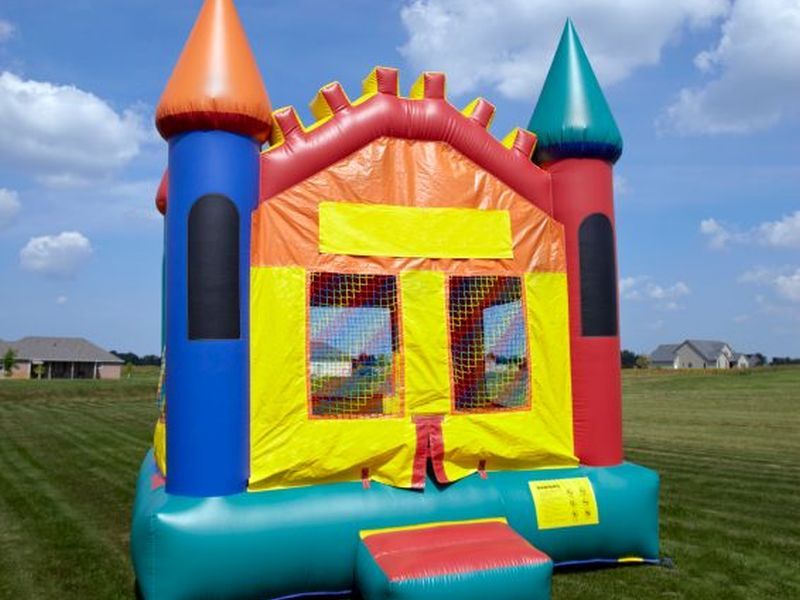 Inflatable bounce houses are big, colorful, cheap to rent and practically scream "childhood fun." So, what could possibly go wrong?

It turns out plenty. For one thing, the air-filled party staples are vulnerable to being blown aloft and even flipped over if left unmoored, a new study warns.

But even when staked firmly in place, researchers warn that the biggest problem is the potential for a bounce house accident to send a child to the ER with a broken bone, a muscle sprain or a concussion.

"By far the most common bad outcome is not related to meteorology," explained study lead author John Knox, a geography professor at the University of Georgia. "It's when a child collides into someone else by bouncing into them, or they bounce right out of the house, something like that."

Knox noted there are only about a half-dozen wind-related accidents each year around the world, though the potential to kill or maim kids means such incidents "get a huge amount of media attention."

On the other hand, bounce house collisions are much more common, he noted, triggering roughly 10,000 ER visits in the United States alone.

Most of these accidents involve children, said Knox, given that bounce houses "are popular rentals for birthday parties, carnivals and other gatherings where kids will be present."

After poring over U.S. National Weather Service data, U.S. Consumer Product Safety Commission (CPSC) numbers and a wide range of independent analyses, Knox and colleagues determined that since 2000 there have been more than 130 known weather-related incidents involving bounce houses around the world, though it's thought many more cases have gone unreported.

These accidents resulted in 479 injured users, with one particularly well-known case in Southern California involving a boy who ended up trapped inside an inflated playhouse as it got lifted up by the wind and plunked right in the middle of a highway. He survived the incident with minor injuries.

In all, 28 kids around the world are known to have died due to weather-driven events since 2000. The worst such disaster, said Knox, "happened just last December in Devonport, Tasmania, in Australia. Six children died when a bounce house at an end-of-school event was picked up in the wind and dropped its human cargo over 30 feet to the ground."

And the researchers pointed out that it's not simply a question of sustained strong winds. Absent proper staking and heavy sandbag weighting, even good weather can suddenly give way to an unforeseen strong gust that can upturn an unsecured structure.

On that front, the team noted that a third of the wind-related accidents involved wind speeds of 20 miles per hour or less, while more than half involved winds of no more than 25 mph.

Meanwhile, "roughhousing will lead to injuries even on a calm day,” Knox said.

To underscore the point, numbers cited by CPSC note that more than 113,000 ER injuries were linked to bounce houses between 2003 and 2013.

The findings were published recently in the Bulletin of the American Meteorological Society.

Thaddeus Harrington, a CPSC public affairs specialist, noted that more recent numbers covering the period between 2017 and 2019 indicate an average of 21,600 inflatable structure injuries occurred each year across the United States, with a dip to just 5,200 in 2020, "likely due to COVID closures."

Knox noted that because there are no federal regulations governing bounce houses, safety is essentially "a state-to-state thing." Seventeen states have either no safety guidelines of any kind "or specifically exclude inflatables from regulations," he added.

The upshot is that it's largely on parents to make sure the situation remains safe.

"Bounce houses are a ton of fun," Knox acknowledged. But "parents just need to be vigilant with regard to safety, and not just about the weather," though he recommended evacuating and deflating the structures whenever winds pick up.

Beyond that, "monitor your kids when they are in them," Knox added. "[And] guard against situations -- overcrowding or roughhousing -- that will lead to injuries even on a calm day."

Meanwhile, the CPSC recommends bounce houses always have adult supervision; not mix children of markedly different sizes; avoid overcrowding; don't allow other toys or objects inside them; remove shoes and glasses before entering, and make sure that the area around a bounce house is clear of other objects.

There's more on bounce house safety at Weather to Bounce.