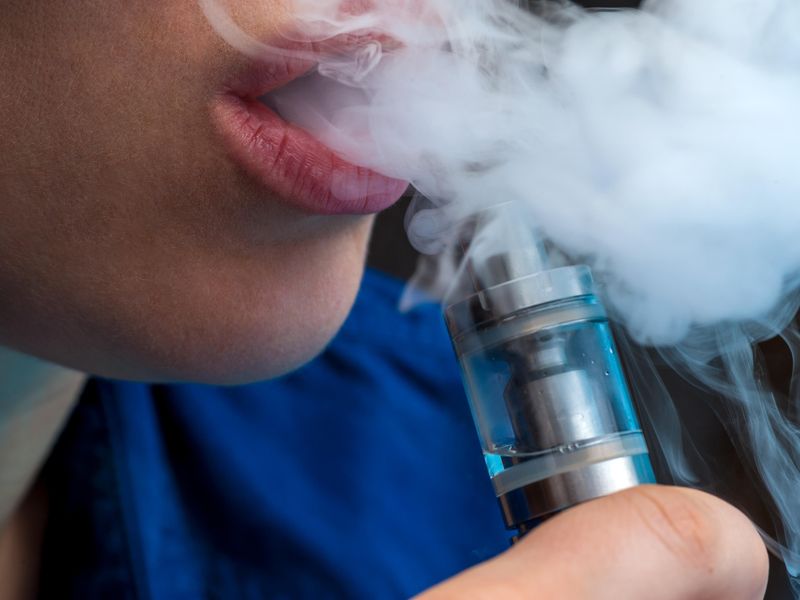 Many Smokers Who Want to Quit Just End Up Vaping, Too

Many smokers eager to quit embrace electronic cigarettes as a tool for kicking the habit, but a new study warns the move may raise the risk for becoming addicted to both cigarettes and vaping.

The finding follows a look at the experience of nearly 112,000 smokers who sought outpatient care at a single hospital between 2018 and 2020.

“Most smokers try to vape to quit smoking,” explained study author Dr. Li-Shiun Chen, an associate professor of psychiatry at the Washington University School of Medicine (WUSM) in St. Louis.

Given that 40 million American smokers want to quit, that's a lot of potential vaping, the researchers noted.

The problem? Like cigarettes, e-cigarettes contain nicotine. And that, Chen said, means that “vaping is as addictive as cigarette smoking.”

To see how that risk plays out among smokers who embrace vaping as a tool for quitting, she and her colleagues pored over a couple of years of data collected by the Barnes Jewish Hospital/WUSM electronic health record system.

The investigators found that over the study period the number of cigarette smokers who also started to vape tripled, rising from 0.8% in the first year to more than 2% in the second year.

About one in five of those “dual-use” smokers did end up quitting smoking within a year, a slightly higher success rate (pegged at about one in six) than what was observed among those who stuck to traditional cigarettes alone.

But roughly two-thirds of patients who ended up both smoking and vaping remained smokers a year out, the team noted.

Such programs — which involve nicotine replacement therapies and/or addiction counseling — helped about one in three dual-use smokers kick their habit, the team noted.

The finding, said Chen, suggests that vaping — at least on its own — is not the answer, “unless they [also] get treatment to reduce craving and withdrawal.”

On that front, Chen said that a number of non-vaping cessation treatments approved by the U.S. Food and Drug Administration “are very helpful.”

Alongside counseling, she mentioned nicotine patches and lozenges, and the prescription nicotine-blocker medication Chantix (varenicline).

Priti Bandi, a principal scientist in the risk factors surveillance research division of the American Cancer Society, said that while prior research into the cessation benefits of vaping have produced mixed results, she was not surprised by the latest findings.

For one thing, “no e-cigarette has been approved by the FDA as a safe and effective cessation product,” Bandi stressed.

And while vaping exposes users to fewer toxic and cancer-causing agents than smoking, “e-cigarettes have serious health risks, including negative short-term effects on airways and blood vessels," Bandi said. "And we do not know the long-term effects of their use. That is why it is important to help e-cigarette users quit using these products completely.”

Bindi's bottom line: “Any potential benefit of quitting cigarettes with vaping will only be realized if smokers completely switch, instead of using both products concurrently. That is why, in my opinion, the more novel finding from this study, and the most relevant for public health, is that treatment with established cessation treatments was able to help dual users of both e-cigarettes and cigarettes quit smoking completely.”

There's more on effective ways to quit smoking at the American Cancer Society.