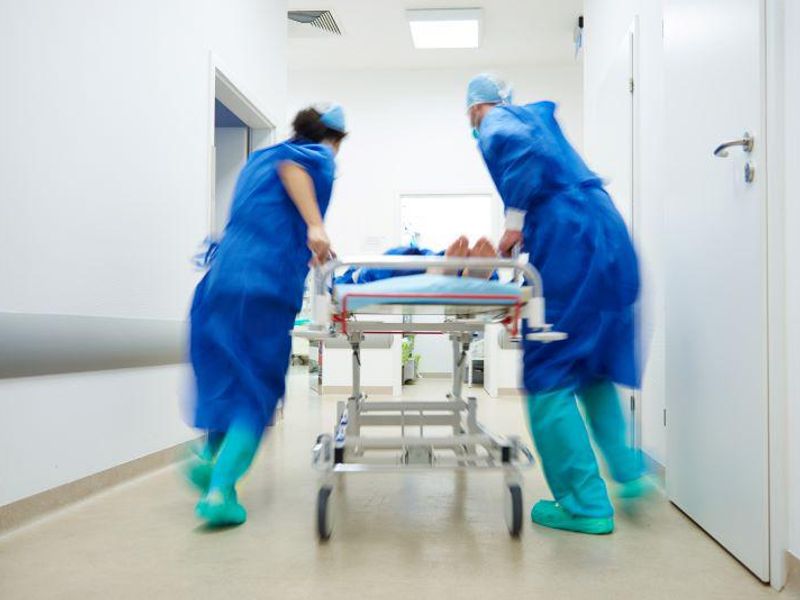 A seemingly endless wait in an emergency department can be taxing for many reasons, but new research suggests that long delays in being admitted to the hospital may even raise a patient's risk of death within the following 30 days.

Why? One possible reason: A crowded ER might mean care happens in suboptimal spaces, said study author Simon Jones, a research professor in the department of population health at NYU School of Medicine in New York City.

Not only that, "it may well be that people need more complicated treatment that is not provided within the [emergency] department itself, say urgent antibiotics, etc. Delaying of treatment is clearly challenging," Jones added.


For the study, his team took a look at the United Kingdom's operational standard to treat emergency department patients within four hours, and whether longer wait times have any impact on patient outcomes. Even before the pandemic, it was a standard that had been followed less because of increases in patient demand.

The researchers analyzed more than 5 million cases between April 2016 and March 2018 from the Hospital Episode Statistics and Office of National Statistics data in England.

"I think we have demonstrated that the longer you wait in an emergency department is a bad thing," Jones said.


The study authors called for policy makers to "continue to mandate timely admission from the emergency department in order to protect patients from hospital-associated harm."

The findings were published online Jan. 18 in the Emergency Medicine Journal.

Emergency departments are not designed to manage patients that need protracted care because they have a continuous revolving door of patients who need to be seen, stabilized and either discharged or admitted, explained Dr. Bret Nicks. He is a professor of emergency medicine at Wake Forest School of Medicine in North Carolina, and a spokesperson for the American College of Emergency Physicians.

As people with chronic health issues continue to age and to live longer because of medical advances in care, pharmaceuticals and surgery, when they get sick their care requires more resources, Nicks said.

When that person is in the emergency department for an extended time because there are no available hospital beds, more work is required of the emergency team and it triggers a backlog of other patients seeking emergency care for heart attacks, stroke or appendicitis, for example.

"Those patients, while getting good care, they don't get ICU-level care, if that's what they're requiring, because I've got more patients that continue to come in. If I have patients with heart attack, strokes or who need emergent surgery, but they have to wait for two, four, six, eight, 10, 12 hours, that is going to impact directly the level of quality of outcome that we're going to see," Nicks said.

In the United States, one of the reasons there aren't enough hospital beds is a long-predicted nursing shortage, he noted. That has led to not being able to staff all the beds that a hospital might have. Nicks suggested a couple of different long-term solutions.

When a primary care clinic is overwhelmed by patient volume, now they might suggest a patient go to the ER if needed. Instead, telehealth might fill that gap for patients with less urgent needs, Nicks said. Seeing these less-acute patients via a telehealth visit would leave room for critically injured patients at the ER, he noted.

Nicks also suggested recruiting former military medics, trained in acute care, to create paramedicine teams that could do house calls for a patient who had a telehealth visit and was then determined to need in-person care.

That's already happening in some locations, Nicks said, but it's often not well-funded.


"We have a paramedicine process in our county and in surrounding counties," he said of the Wake Forest system. "The parent organization of our health system has [had] during COVID a process where patients that were stable enough to go home would be able to have home visits to go ahead and check in on them, and they had a reporting process," Nicks explained.

"And the future state of what we do is can we develop a process that allows people to be at home where they get better rest and better resources, but still be able to make sure that when they start to decline, we have the ability to upscale and to transfer them through that transition of care and recognize [the decline] earlier," Nicks added.

The JAMA Health Forum has more on the impact of the COVID-19 pandemic on emergency rooms.