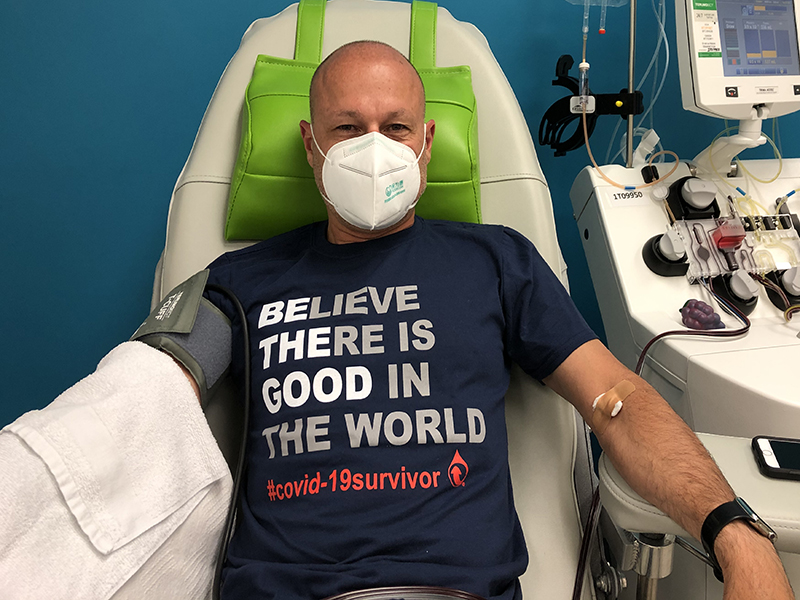 Two groups of researchers aim to find out.

One clinical trial, from doctors at NYU Grossman School of Medicine, Montefiore Health System and Albert Einstein College of Medicine in New York City, will try to determine whether "convalescent plasma" injected into hospitalized COVID-19 patients can protect them from developing severe disease or requiring a ventilator.

Meanwhile, researchers at the Johns Hopkins Bloomberg School of Public Health in Baltimore are poised to launch a pair of new studies looking at the use of plasma in health care workers and those who are sick at home with COVID-19.

"What we hope to see is that convalescent plasma, used at this stage of disease, so early on, prevents patients from dying, from going on a mechanical ventilator, or any sort of bad outcome," Grudzen said in a HealthDay Live interview.

The tactic is "sort of a stopgap measure in the sense that, when you don't have a vaccine, it's something that can be used in a new infection where we don't have known drugs or other therapeutics or biologics that we know can work against the disease," Grudzen explained.

COVID-19 survivor Domenico Piccininni, 50, donated his plasma in late April at Atlanta's Northside Hospital. He hopes his antibodies can help kick-start the immune systems of people made very ill by coronavirus.

Exactly what is blood plasma?

"Blood plasma is the liquid part of the blood," explained Dr. Arturo Casadevall, chair of Hopkins' department of molecular microbiology and immunology and lead researcher on the two Hopkins studies.

Characterized by its yellowish cast, plasma contains both red and white blood cells, as well as the colorless platelets the body deploys to clot and stem bleeding from wounds or cuts.

With plasma therapy, he explained, "you're taking the antibodies that somebody else made when they recovered and you're transferring them to a new person. So, the new person gets them already made, and can use them right away."

Casadevall said the practice of extracting convalescent plasma from survivors of a disease and giving it to patients either as a preventive measure or as a treatment has a "long history" in medicine.

Grudzen also noted convalescent plasma's long history in medicine, but added that, "It's not without potential harms."

Convalescent plasma not without dangers

The two main ones are the patient catching an infectious disease, though blood screening helps to lessen that possibility, or a patient's immune system reacting badly to the injected plasma of another person. Grudzen noted that, "especially in older people, it's a little more risky."

And Casadevall cautioned that plasma therapy still needs to be tested on COVID-19 to see if it'll work against this specific virus, "simply because it's a new organism."

To that end, Hopkins is set to start two COVID-19 plasma investigations simultaneously, with funding coming from Bloomberg Philanthropies, the state of Maryland, and Hopkins.

"The first trial is focused on trying to use plasma on high-risk populations," he noted. That investigation will include health care workers on the frontlines of the pandemic and nursing home residents, with a minimum of 150 participants.

"The second trial is focused on people who are sick at home," Casadevall said. "We know most people recover. Most people today who are sick are sitting at home hoping to get better. But we also know that some fraction of them will get worse," he added.

"So the question is, can you intervene at home? Can you give them a unit of plasma when they are ill but not yet in respiratory distress, and then prevent them from having to go to the hospital?" he said.

Casadevall acknowledged that his team will not be the first to explore the potential of convalescent plasma. In fact, he noted that 7,200 COVID-19 patients have already been treated with convalescent plasma in hospitals across the United States.

In the New York City trial, researchers hope to enroll 300 hospitalized patients, aged 18 or older, from seven hospitals. The trial will focus on patients who are sick enough to be hospitalized, but not so sick they have been moved to the intensive care unit or require a ventilator.

"We felt strongly we wanted to test it in hospitalized patients," Grudzen said. But, "we know the earlier, the better," she added.

By contrast, both of the Hopkins studies will be conducted in the community, outside of a hospital setting. And both will seek to provide hard data to demonstrate that convalescent plasma therapy can really work against COVID-19.

That means the studies will be randomized, controlled trials, in which some of the patients in each study will get blood plasma with COVID-19 antibodies while others will get regular plasma without antibodies (a placebo).

As to what will constitute success, Casadevall said the trials have relatively straightforward goals: On the one hand, can convalescent plasma prevent disease, and on the other, did it prevent these individuals from getting worse? He expects firm results on both fronts in about two months.

Grudzen noted that while there wasn't enough convalescent plasma in the beginning of the pandemic, "there's [now] plenty of plasma for all the patients that need it."