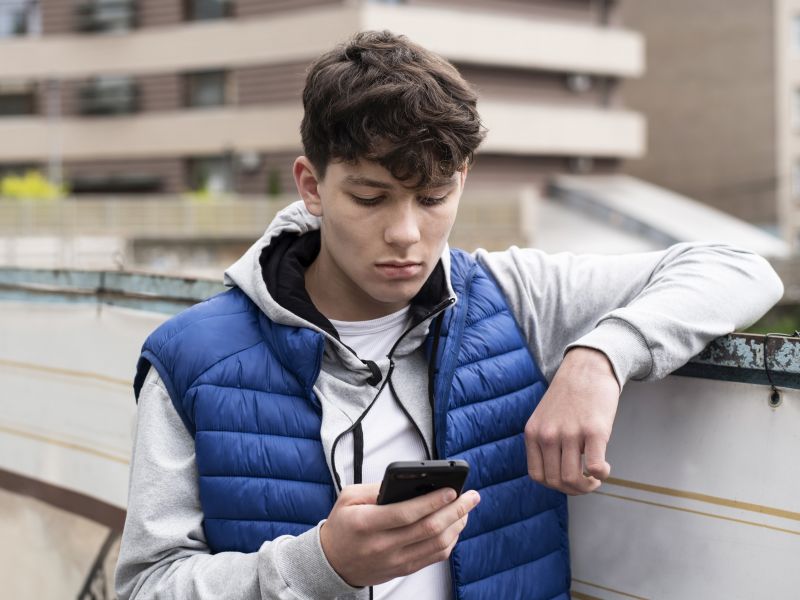 Many U.S. teenagers may be using their smartphones to harass, humiliate or otherwise abuse their dating partners.

That's according to a recent national survey of teens who'd been in a romantic relationship in the past year. Researchers found that 28% had been victims of "digital dating abuse" -- surprisingly, with boys being targets more often than girls.

While teen dating abuse has long been a problem, digital technology has opened up new ways for it to happen, according to lead researcher Sameer Hinduja, co-director of the Cyberbullying Research Center and a professor of criminology at Florida Atlantic University.

Teens might send threats by text; make embarrassing posts on social media; publicly share private, sometimes sexual, pictures; or secretly look through a partner's device to monitor him or her.

The new findings, from a nationally representative survey, give a better sense of how common the problem is among U.S. teens, Hinduja said.

"This helps clarify what's going on with youth who are in romantic relationships," he said.

"Many teenagers," Hinduja said, "really don't know what they're doing when it comes to building healthy relationships."

Digital dating abuse is generally not an isolated issue: Many teens in the study (36%) said they'd been abused offline -- physically, verbally or through coercive, controlling behavior. And it often went hand-in-hand with digital abuse.

That's not surprising, according to Hinduja, since unhealthy relationships would usually manifest both face-to-face and online.

Elizabeth Englander, a researcher who was not involved in the study, agreed.

"It makes no sense to think that someone who is being abusive toward a dating partner would do so only in person," said Englander, executive director of the Massachusetts Aggression Reduction Center at Bridgewater State University.

"This is an important [study]," she said. "It demonstrates the close relationship between different psychological types of dating abuse."

So when talking to kids about dating abuse, Englander said, it's important to address both real-world and online behavior.

Another key finding runs counter to what many people might expect, according to Hinduja. Boys were significantly more likely than girls to say they'd been digitally abused. About 32% of boys reported it, compared to about 24% of girls.

It's not clear why, Hinduja said. But, he noted, some research suggests that young girls, when dealing with relationship problems, may turn to aggressive behavior that is stereotypical of boys.

And, in fact, other surveys have found that teenage boys commonly report offline forms of dating abuse.

The findings, recently published in the Journal of Interpersonal Violence, come from a survey of more than 2,200 12- to 17-year-olds who had been in a romantic relationship in the past year.

Overall, teens who were victims of dating abuse offline were more than 18 times more likely than their peers to report digital abuse, too.

Certain other kids were also at increased risk. They included those who were sexually active, who had ever sent a "sext," who had depression symptoms, or who had ever been targets of "cyberbullying" in general.

It's possible, Hinduja said, that once sex or sexting enters the picture, a teen might feel he or she has "power" over a partner.

Many schools do have programs that address specific issues like cyberbullying and sexting, according to Hinduja.

But kids need to learn broader lessons, too, he said.

"We should be talking to them about what healthy, respectful relationships look like -- both platonic and romantic," Hinduja said. "And it should start in middle school."

That was also his advice to parents.

"I wouldn't want parents to have a knee-jerk reaction and take their kids' devices away," Hinduja said. "We need to let our sons and daughters know they can talk to us, and have nonjudgmental conversations about these issues."

The nonprofit Futures Without Violence has advice for parents on teen dating abuse.