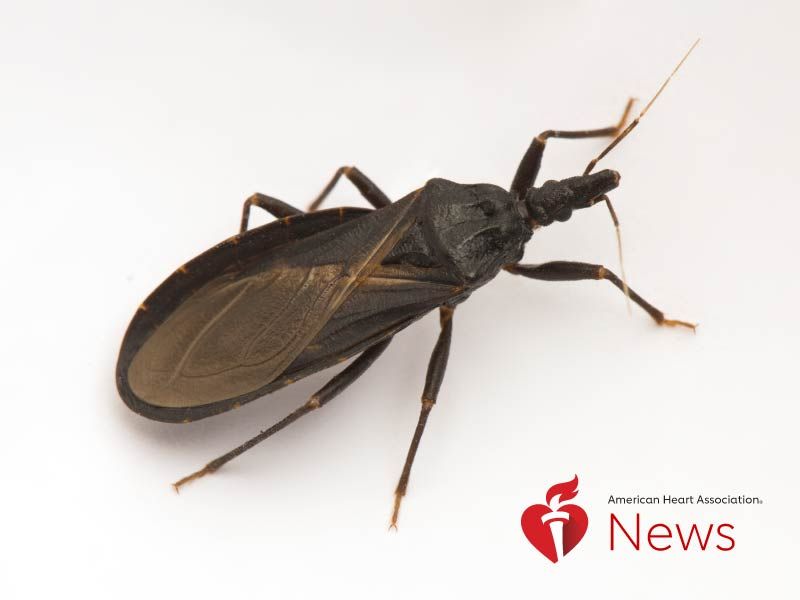 AHA News: Should You Be Worried About Blood-Hungry 'Kissing Bugs'?

It sounds like something out of a horror film: A blood-hungry insect feeds on its prey's faces while they sleep, leaving behind a parasite that can cause stroke and heart disease.

But the triatomine, or so-called "kissing bug," is all too real and found regularly in Latin America, but also has been found in several areas of the United States, as far north as Illinois and Delaware. And while it often targets faces, the insect will settle for any patch of exposed skin.

With summer barbecue season on the horizon, how worried should people be?

It's important to keep things in perspective, said Dr. Caryn Bern, a professor of epidemiology and biostatistics at the University of California School of Medicine. After an acute flu-like period that lasts from weeks to months, most people who test positive for Chagas disease show no symptoms.

"The estimate is that 20 percent to 30 percent of people with Chagas disease will eventually develop heart or gastrointestinal disease, although heart disease is much more common," Bern said. "That's over a lifetime, and it usually doesn't show up until years after the infection occurred."

It's not the bug that causes Chagas disease, but rather a parasite that lives in its poop. When a person inadvertently rubs the bug's feces into the bug wound, their eye or another mucous membrane, the parasite sometimes makes itself at home. Chagas disease also can be transmitted from mother to fetus; from contaminated blood transfusions; via an infected organ donor; or in rare cases, through food or drink.

While about 300,000 people in the United States have Chagas disease, most of them contracted it while living in Mexico, Central America and South America, where the Centers for Disease Control and Prevention estimates up to 6 million to 8 million have been infected. All told, the disease causes more than 10,000 deaths a year worldwide, according to the World Health Organization.

But it's important to keep in mind that since 1955, there have been fewer than 50 documented cases of people who have acquired the parasite from exposure to the triatomine in the U.S., said Dr. Susan Montgomery, who leads an epidemiology team in the Parasitic Diseases Branch of CDC's Division of Parasitic Diseases and Malaria.

"The parasite has to get into a human's body or an animal's body by contaminating the wound," Montgomery said. "It's pretty complicated."

But there is cause for concern, said Paula Stigler Granados, an assistant professor at Texas State University who leads the Texas Chagas Taskforce. Stigler Granados and her team work to raise awareness about Chagas in a state where more than 60 percent of triatomines test positive for the parasite that causes the disease.

"The more we look, the more we find," Stigler Granados said, noting that since the American Red Cross started screening new blood donors for Chagas disease, they have identified many people infected with the disease. "Although the blood donation tests are extremely sensitive and sometimes have false positives, that's an indicator that it could be a bigger problem we should be monitoring."

There is a treatment for people who have Chagas disease. In 2017, the Food and Drug Administration approved benznidazole, a 60-day medication regimen for people ages 2 to 12.

Once Chagas disease becomes chronic, the medication may not cure it but could slow the progression in younger people. For older people who are affected, experts recommend doctors and patients weigh the individual benefits with the possible side effects of the medication, which can include rash, abdominal discomfort, and numbness or tingling in the hands and feet.

The best bet is to avoid infection altogether. The CDC advises people to use window screens, seal any gaps in the home, allow pets to sleep indoors and eliminate things near the house that attract insects, including lights and wood, brush and rock piles.

If you do come across a triatomine, don't kill it, the CDC recommends. Instead, capture it with a container and either fill it with rubbing alcohol or freeze it. Then take it to your local health department or university laboratory for identification. Testing can help to determine if it is a triatomine, and if so, whether it carries the parasite.

In the meantime, experts agree on one thing: People should stay calm.

"The important thing to remember is that these bugs are more interested in staying out in the woods and feeding on animals than they are in feeding on you," Montgomery said. "It's important to prevent Chagas disease if you can, but it's very hard to get this infection and it's not happening often."