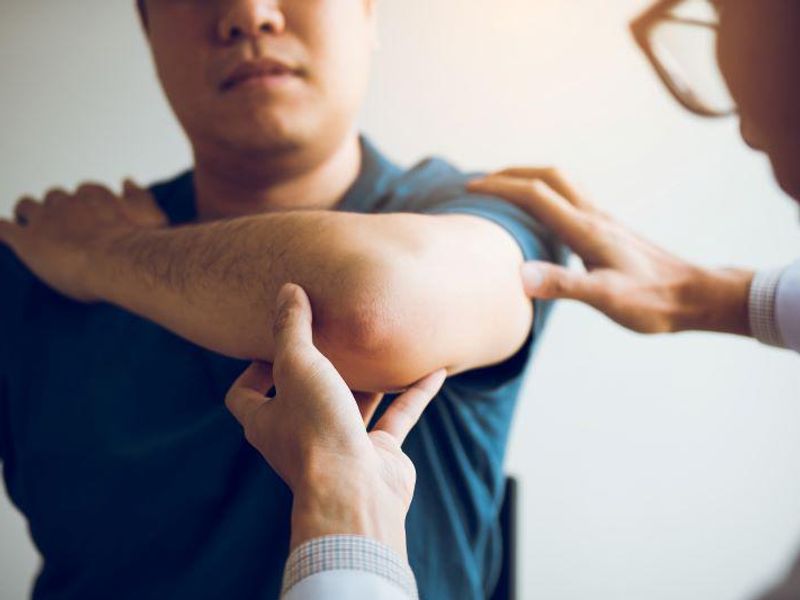 Arm Pain in the Young and Fit: It Could Be a Vascular Disorder

Even being young and athletic doesn't protect against a vascular disorder.

People experiencing arm pain may have something called thoracic outlet syndrome, a disease that often strikes patients in their 20s and 30s and has different causes from more typical vascular disease.

Some types require only physical therapy to correct, but surgery is considered in more serious cases.

Thoracic outlet syndrome affects an area at the base of the neck where there is a bundle of nerves, an artery and a vein.

Some people simply don't have enough room for everything. In others, the space gets crowded, as when an athlete develops his or her shoulder and neck muscles. Former New York Mets pitcher Matt Harvey is an example of this.

About 90% of patients with the syndrome have the neurogenic version, in which just the nerve bundle (plexus) is pinched. It can still be debilitating with arm pain and numbness.

The other two types -- venous and arterial -- happen when one or the other is compressed. Because this affects blood flow, these are considered more serious and usually require surgery.

The venous type can cause blood clots to form. Blockages can cause arm swelling that is sometimes so severe that moving the limb becomes impossible. Blood return from the arm can stop for good.

In the artery type, ballooning known as an aneurysm can appear as blood flow stops.

"People can lose fingers, hands and even arms," Ali said in an institute news release. "People can die from this in severe cases."

Vein clots can also be fatal if they travel to the lungs. Usually, the damage is just in the arm. The result is called deep vein thrombosis. In this condition, the clot forces the blood around the obstruction and swelling occurs.

To diagnose thoracic outlet syndrome, vascular surgeons evaluate blood flow using tests like venograms, in which dye is injected into the blood and the area is viewed with an X-ray, Castello Ramirez said.

For neurogenic thoracic outlet syndrome, electromyography (a procedure to assess the health of muscles and nerve cells that control them) can help make the diagnosis.

The condition can sometimes be misdiagnosed because even magnetic resonance imaging can fail to show the abnormalities.

Primary care doctors may detect a blood clot and prescribe a drug to dissolve it, but they'll miss the root cause, the two specialists said. That can lead to long-term complications, such as clots that won't break down.

If a patient suspects thoracic outlet syndrome, they should ask their doctor for a test. Pain and swelling are reasons to go to the doctor.

"I would say if people have swelling and pain of the arms in the absence of trauma -- if it gets really swollen and painful, it could be deep vein thrombosis," Castello Ramirez said in the release.

It's also important to get help if the skin appears mottled and is cool to the touch. Any debilitating pain or pain that affects your ability to lift your arms merits a doctor visit.

The U.S. National Library of Medicine has more on thoracic outlet syndrome.