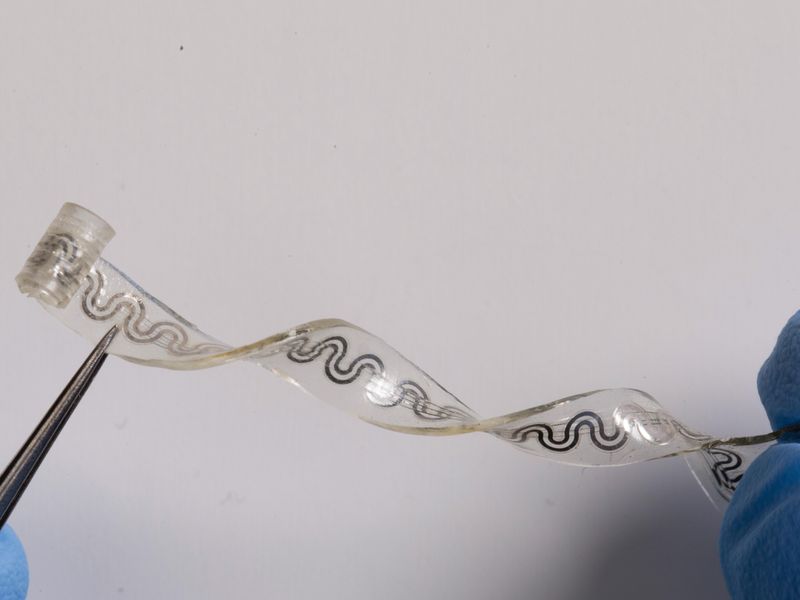 Hinting at a future alternative to opioid painkillers, scientists have developed a tiny implant designed to ease post-surgery pain and then dissolve once the job is done.

So far, the research has been limited to lab animals, and it will be several years before the technology could be ready for human testing.

But the hope is to eventually have an alternative to managing postoperative pain that relies on engineering, rather than drugs, said researcher John Rogers, a professor at Northwestern University Feinberg School of Medicine in Chicago.

The implant is made of soft, water-soluble materials that form a cuff that can wrap around a peripheral nerve -- the kind that send pain signals from the body to the spine and brain. The device delivers targeted cooling to the nerve, inhibiting those pain signals from reaching the brain.

And once it's no longer needed, the implant dissolves into the body's fluids.

According to Rogers, the implant could potentially provide pain relief after many types of surgery -- reducing or even negating the need for painkillers like opioids.

"We hope it can completely replace opioids," Rogers said, adding that a lot of work remains before there can be any real-world use.

"We're talking about a pretty radically new technology," he said.

The implant -- described in the July 1 issue of Science, which also published an accompanying editorial -- cools nerves via the familiar concept of evaporation. It contains a liquid coolant that is induced to evaporate at specific spots along a peripheral nerve, similar to the way the body cools itself by sweating.

That cooling is able to slow and then eventually stop any pain signals traveling along the nerve.

In lab studies with rats, Rogers and his colleagues used the device to cool precise targeted peripheral nerves and turn off pain signals "on demand."

The implant itself is tiny, just 5 millimeters at its widest point, according to Rogers. One end curls into a cuff that wraps around a single nerve. Inside are two "microfluidic" tubes. One contains the liquid coolant perfluoropentane, which is already used in medicine -- in ultrasound contrast agents, for example. The other tube contains dry nitrogen.

When the gas and the coolant mix in a shared chamber, the liquid evaporates and creates the cooling effect. At the same time, Rogers said, an electronic sensor in the implant monitors the temperature of the nerve, to ensure it does not get too cold.

The system does involve "external hardware," Rogers pointed out. The implanted device connects to a pump outside the body -- similar to an IV line, he said -- that allows the user to activate the implant, and then dial the intensity up or down.

"The implant is not self-contained and wirelessly controlled," Rogers said. But, he added, the hope is to refine the technology so that it can be, with the user controlling the cooling with a wrist-worn device.

First, there are more immediate questions to be answered. Rogers said his team will be looking at whether there are "biological consequences" to prolonged cooling of peripheral nerves.

A pain-medicine expert not involved in the study called the work "fascinating."

Unlike the sprouting that occurs when a nerve is heated, cooling allows nerves to stay intact, said Dr. David Dickerson, chairman of the American Society of Anesthesiologists' Committee on Pain Medicine.

He agreed that it's necessary to assess the effects of long-term cooling.

"We want to make sure there are no pathological changes introduced -- no new nerve dysfunction," Dickerson said.

If the technology pans out in humans, he said he could envision the technology being used for surgeries that tend to cause more, or longer lasting, pain afterward.

In the real world, Dickerson noted, cost-effectiveness is a key consideration: Insurers have to be willing to pay for a complex technology rather than standard pain medication.

Already, Dickerson said, doctors and researchers have been looking at new ways to control pain and reduce opioid use after surgery. He pointed to the example of peripheral nerve stimulation, in which a tiny insulated wire is placed alongside a peripheral nerve and connected to a battery-powered generator that sends mild electrical pulses to the nerve.

A 2021 study found that the approach reduced patients' post-surgery pain in the first week, and substantially curbed their need for opioids.

With the cooling implant, one advantage is its ability to disappear. All of the materials, Rogers said, safely dissolve in the body's fluids, eliminating the need for any surgical removal.

Rogers and his colleagues have previously reported on a dissolving pacemaker they are developing -- for cases where patients temporarily need heartbeat pacing, such as after a heart procedure. That technology -- a thin, soft patch that adheres to the heart's surface -- is fully wireless.

The American Society of Anesthesiologists has more on pain management.