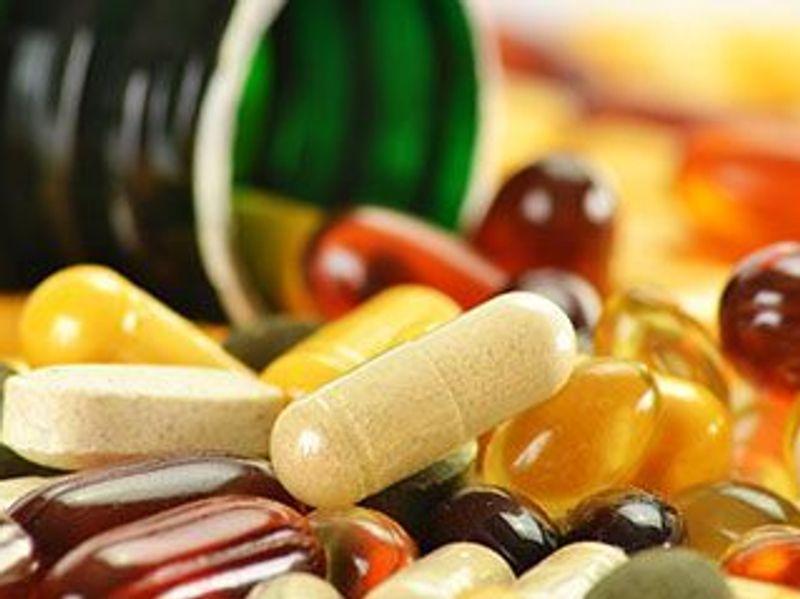 Millions of people pop vitamins and supplements every day in hopes of staving off heart disease and cancer, but a new report finds the evidence to support that strategy is largely lacking.

While there is some research showing that a daily multivitamin may slightly reduce cancer risk, the bigger picture suggests a lack of enough evidence to say that supplements can help prevent heart disease and cancer.

There is, however, enough evidence to state that beta carotene supplements may actually increase risk of lung cancer, especially among folks who are at high risk, and may also increase the chances of dying from heart disease. What's more, vitamin E provides no cancer or heart disease prevention benefits.

Those are the main takeaways from the new report from the U.S. Preventive Services Task Force, an independent panel of national experts that regularly make evidence-based recommendations about preventive health issues. This report updates the group's 2014 stance on this topic.

"This is not a negative message, and it isn't saying that there are no [cancer or heart disease prevention benefit] for vitamins and minerals," cautioned task force vice chair Dr. Michael Barry. He's the director of the Informed Medical Decisions Program in the Health Decision Sciences Center at Massachusetts General Hospital, in Boston.

"We called for more research with longer follow-up, as well as studies across different racial and ethnic groups, to see if there are variations," Barry added.

The recommendations are based on a review of 84 studies on multivitamins, supplement pairs or individual supplements, and cardiovascular disease and cancer risk in healthy, non-pregnant adults, published between January 2013 and February 2022.

"For the most part, vitamin and mineral supplementation did not reduce cancer or heart disease [risk]," said Elizabeth O'Connor. She is an associate director at Kaiser Permanente Evidence-Based Practice Center in Portland, Ore. O'Connor is one of the researchers who helped analyze the studies included in the new recommendations.

Research did show a 7% reduction in cancer risk among people taking a multivitamin, compared to those taking a dummy pill or placebo. Still, the studies that led to this conclusion had limitations, including short follow-up. "Even though this finding was statistically significant, there are some lingering questions," O'Connor said.

Importantly, the new recommendations do not apply to people with known or suspected nutritional deficiencies or special needs, such as people who are or may become pregnant and need folic acid.

The recommendations were published online June 21 in the Journal of the American Medical Association.

"Vitamin and mineral supplements are not a silver bullet for healthy Americans," said Dr. Jenny Jia, who wrote an editorial accompanying the new study. She is an instructor of general internal medicine at Northwestern University's Feinberg School of Medicine, in Chicago.

Instead of popping vitamins, focus on eating a balanced diet that is loaded with fruits and vegetables, exercising regularly, and getting the recommended screening tests to help prevent heart disease and cancer, she said. "Vitamins and minerals are a distraction, and offer minimal to no benefit for healthy American adults," Jia noted.

Dr. Mark Moyad is the Jenkins/Pokempner director of preventive & alternative medicine at the University of Michigan Medical Center in Ann Arbor. He sees things differently, especially when it comes to daily multivitamins. "They may reduce cancer, and even though it's a modest reduction, this is not a small deal," said Moyad, who had no ties to the research.

"It's not so much of a Wild West out there anymore when it comes to supplements," he added. Many third-party groups now offer seals of approval for brands that are quality tested and contain what the label says they do.

"If you do take supplements, seek out ones that have a clean track record," Moyad suggested.

The Council for Responsible Nutrition, which represents the supplements industry, took issue with the new report.

"Americans fall short in many key nutrients," Andrea Wong, the organization's Senior Vice President of Scientific and Regulatory Affairs, said in a statement. "In fact, the Food and Drug Administration and the 2020--2025 Dietary Guidelines for Americans identified that under-consumption of calcium, potassium, dietary fiber, and vitamin D is of public health concern for the general U.S. population because low intakes are associated with numerous health concerns."

Nutrition.gov has more information on foods that are high in essential vitamins and minerals.