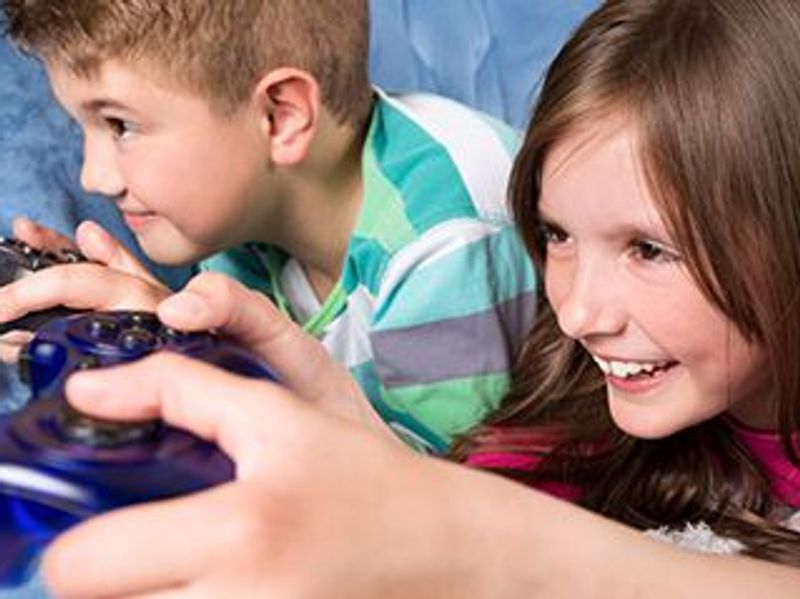 Folks often believe that video games rot a kid's mind, but a new study argues the opposite could be true.

Children actually might get a brain boost from playing hour after hour of video games, researchers report.

American kids between 9 and 10 years of age who spent more time playing video games experienced a significant increase in their intelligence scores when retested two years later -- amounting to an extra 2.5 IQ points above the average.

"Children who played more video games were the ones experiencing the most gains in intelligence after two years," researchers concluded in their paper, which was recently published in the journal Scientific Reports. "This is evidence of a beneficial causal effect of video games on cognition."

Other forms of screen time -- watching videos or chatting on social media -- had neither a positive nor negative effect on a kid's intelligence, the researchers found. The study received no funding from the video game industry.

"We didn't examine the effects of screen behavior on physical activity, sleep, well-being or school performance, so we can't say anything about that," senior researcher Torkel Klingberg, a professor of cognitive neuroscience at the Karolinska Institute in Stockholm, said in an institute news release.

For this study, Klingberg and his colleagues analyzed data on more than 9,000 boys and girls participating in a long-term U.S.-funded study of brain development and child health.

At ages 9 to 10, the kids underwent a battery of psychological tests to gauge their general brain power. They were also asked how much time they spent watching TV and videos, playing video games, and engaging with social media.

On average, the kids spent 2.5 hours a day watching TV, a half-hour on social media, and one hour playing video games.

Two years later, just over 5,000 of the children repeated the psychological tests, to see how their intelligence had changed.

Results showed that kids who played more than the average hour of video games daily wound up with higher intelligence scores than kids who spent less time with a game controller.

That increase remained significant even after researchers accounted for other factors such as differences in household income and parental education.

Video games might make kids smarter by making them think, providing "enriched" environments that require them to tackle tasks they might not encounter in their day-to-day lives, said Dr. Anish Dube, a member of the American Psychological Association's Council on Children, Adolescents and their Families.

"The more someone practices or plays these video games, the more they reinforce the neural pathways involved in accomplishing the objectives of the game -- and those same neural pathways may be involved in other types of real-world decision-making that factor into our measures of intelligence," he said.

By the same token, TV watching and social media engagement are more passive forms of screen time that don't require as much brain work, said Dube, an associate professor of psychiatry at Charles R. Drew University of Medicine and Science in Los Angeles.

"Video games by design require focus and attention to the content presented and strategizing in the moment, whereas it's easy to watch something on television without paying much attention to the content," Dube said. "If you watch a segment on television and miss something, you do not 'lose' and can still infer the missed parts based on the remaining narrative. This would be harder to do with video games."

Dube noted that the study doesn't address what, if any, interaction these factors have with the emotional and mental health of young people -- something in which he's interested as a psychiatrist.

Another expert in child development agreed that a closer look at mental health may be needed.

Dr. Damon Korb said the study was designed to only look at potential positive benefits related to intelligence. It didn't consider the possible negative health effects from video gaming that have been found in other research --an increase in the risk for depression and anxiety among gamers; a hampering of the launch into adulthood; ase well as physical ills such as obesity.

"Clinical experience shows significant negatives also are associated with gaming," said Korb, who directs the Center for Developing Minds in Los Gatos, Ca. "I think everyone should take caution when looking at these results."

And he stressed that if you want your kids to get an intelligence boost, video games aren't the only option.

The study's authors "don't compare gaming to things like playing chess or piano lessons or table tennis, which all have studies indicating some positive cognitive benefit as well," Korb noted. "And on top of that, games are designed to be addicting -- they're designed for kids to sit and do more and more and more, and that is potentially dangerous and unhealthy."

Still, Dube praised the study for trying to "take a more nuanced approach to measuring the effect of screen time on young people, rather than treating all screen time as one homogenous stimulus with the same universal effect."

But he agreed that parents should keep a close eye on the type and quality of their children's screen time.

"If a certain form of screen time appears to have a positive effect on a young person's well-being, parents should remain open and curious about this, just in the same way as if they begin to notice that there is a harmful effect of certain screen time on their child," Dube noted.

"As children grow, their developmental needs change, and likely so too the quantity and quality of the screen time that they will benefit from or that would be detrimental to them," he said.

The American Academy of Pediatrics has more about creating a family media plan.