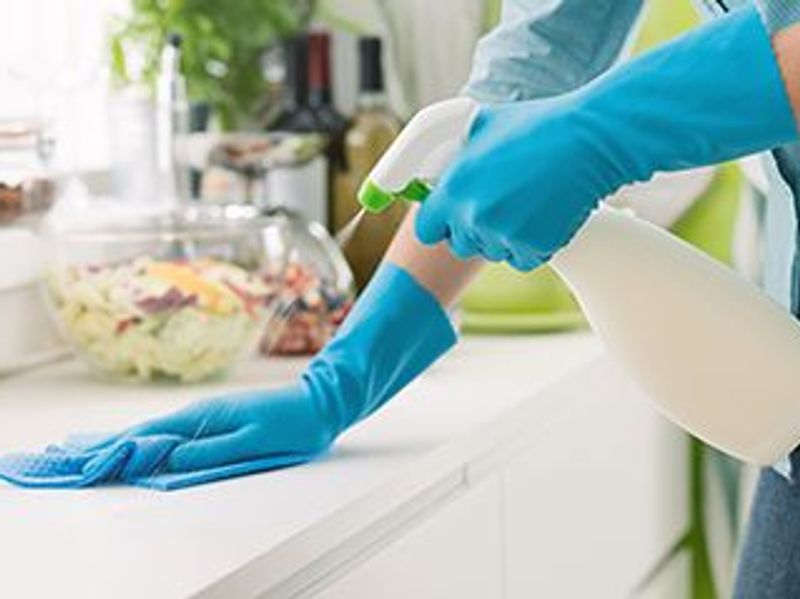 Mom's Use of Workplace Disinfectants in Pregnancy Tied to Eczema, Asthma in Kids

If you're a worker who plans to get pregnant, take heed of a new study that warns that pregnant women who work in hospitals and are exposed to disinfectants may be more likely to have children who suffer from asthma and eczema.

The Japanese researchers focused on occupational disinfectant use, noted study author Dr. Reiji Kojima, not use of disinfectants by the general public.

"The study found that occupational disinfectant use during pregnancy increased the risk of developing asthma and eczema in children. However, this result still needs to be validated with regard to impact of disinfectant use in general," said Kojima, who is in the University of Yamanashi School of Medicine's department of health sciences.

"There is a clear benefit of disinfectant use in pandemic coronavirus infection, so I think disinfectant should continue to be used," Kojima added.

For the study, the researchers included more than 78,000 mother-child pairs who were part of the Japan Environment and Children's Study.

The study was observational and couldn't determine cause, but the researchers offered some suggestions.

It could be that the disinfectants affect the microbiome, having an effect on the gut and skin microflora of both the mother and child. Or, it could be immune-mediated, meaning that exposure to some chemicals affects the fetus in-utero.

Another possibility is that these mothers are more medically knowledgeable and have sought out health care for their children, the study authors noted.

"I think the microbiome is said to be involved in the development of allergic disease in children, and so it is possible that disinfectant use causes the change in microbiome," Kojima said. "And also it is possible that people in a disinfectant-using occupation are exposed to other chemicals which may have contributed to the present result. I think further research is needed to elucidate the mechanism."

Other factors that are associated with young children developing asthma or eczema include prenatal exposure to smoking, chemicals, mold and air pollutants, the researchers pointed out in the report. Genetics also play a role.

The findings were published online March 28 in the journal Occupational & Environmental Medicine.

Breastfeeding is associated with a lower risk of asthma, noted Dr. Jon Romeo, a clinical practicing allergist in Raleigh, N.C., and chair of the American College of Allergy, Asthma and Immunology asthma committee. Romeo was not involved with the new study.

A significant number of children do have transient wheezing during their first five years of life that they outgrow and which is not asthma, Romeo noted.

"I don't think there's any one thing that automatically causes a development of asthma," Romeo said.

While the study size is a strength, a limitation is disinfectant use was self-reported and the cleaning agents were not named. Among the disinfectants known to be widely used in the medical field are alcohol, chlorhexidine and quaternary ammonium salts.

Alcohol-based hand sanitizers tend to be more of an irritant than an allergen, Romeo added.

Exposure to disinfectants in occupational settings has previously been associated with asthma and dermatitis in the individuals using them.

"I would be a little cautious about making blanket recommendations from any one study, but I think it's certainly, knowing what we know about postnatal exposure to some of these disinfectants and irritants and the risk of associated asthma, I think it's definitely an important thing to think about," Romeo said.

"Whether prenatal exposure to these things from the mom's history could increase the risk of their child developing asthma, I think it's something that definitely needs to be looked into more," Romeo said. "I think it's great that the authors were able to highlight this association. I'm guessing it's going to spur additional studies in the future."

The U.S. National Institute of Allergy and Infectious Diseases has more on eczema and asthma.