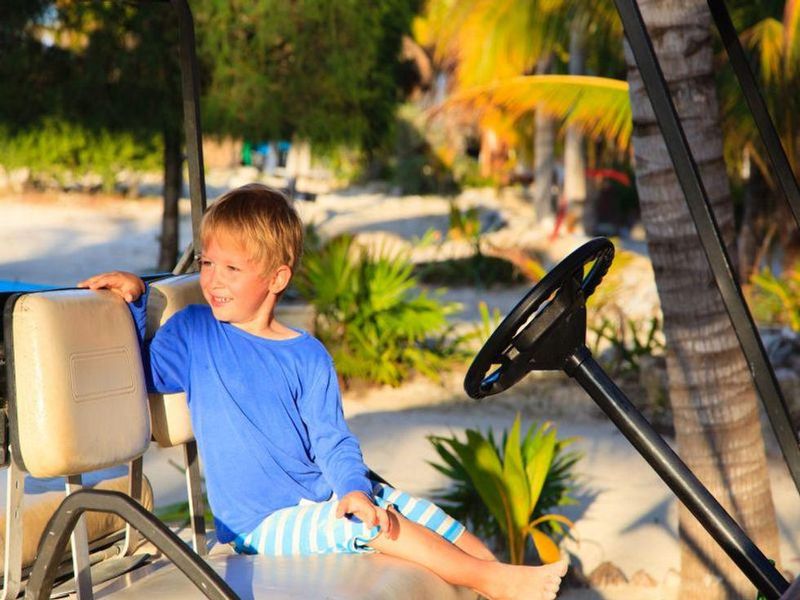 Golf carts aren't just for golfing anymore: They also abound in retirement communities, on farms, and at sporting and other events.

But the downside of that newfound popularity may be that an increasing number of children and adolescents are injured from the carts each year, a new study suggests.

A research team from the Children's Hospital of Philadelphia (CHOP) found more than 63,500 injuries to children in the United States took place between 2010 and 2019 -- roughly 6,500 per year in the past few years.

More than half of those injuries happened to children 12 and younger, who aren't even close to the legal driving age for most other vehicles.

"The vision for this work is that we're simply raising awareness. We're trying to be advocates for children," said Dr. Theodore Ganley, director of CHOP's Medicine and Performance Center and chair of the American Academy of Pediatrics Section on Orthopedics. "If everyone's aware of the risks that golf carts can impose not just to teenagers and adolescents, but also pre-adolescents, moving forward, perhaps prevention measures can be instituted.

"The fact that it's children under the age of 12 is surprising to me. We think of drivers as 16. Now, they could be passengers on there. It could be an older sibling or parent driving," Ganley said.

The researchers used data from the National Electronic Injury Surveillance System, finding that 50.8% of injures happened in those ages 12 and younger, with the mean population age of 11.7.

At the beginning of the study period, there were about 5,490 injuries to children each year using golf carts, which rose to more than 6,500 during each of the last three study years.

The greatest number of injuries happened at school or sports events.

Boys were more frequently injured than girls. Most injuries were superficial. Fractures and dislocations were the second-most common type of injuries. A majority of injuries were to the head or neck.

Most of those injured were treated and released at hospitals or medical centers.

"We're sometimes treating more minor fractures, but sometimes more severe fractures. Some of these golf carts are rolling over so there are more severe injuries as well," Ganley said.

Golf courses themselves can have conditions that can present hazards. Steep inclines and wet grass may be a challenge, Ganley noted. The inexperience of the drivers and the riders is also a factor.

"I think when it comes to motor vehicles -- cars, and trucks -- there's very specific guidelines. Roads can only be created at a certain grade or a certain inclination, and so there's very strict criteria in this country about how we have to build a road this certain way," Ganley explained.

The study called for considering improved safety guidelines and regulations for golf carts.

"I'm not here to say that no patient of a pediatric age should ever be on a golf cart or driving a golf cart. I just think we probably should be more mindful of supervision, and the younger children are, the more they should be supervised," Ganley said, "and even not just as drivers, but passengers."

The research was presented Saturday at the American Academy of Pediatrics virtual annual meeting. Findings presented at medical meetings are considered preliminary until published in a peer-reviewed journal.

Parents should be aware of the regulations for golf carts in their state and follow them, setting the same kinds of ground rules for safety as for kids riding a bicycle, said Dr. Lois Lee, a senior associate in medicine at Boston Children's Hospital.

"I think first it's important for people to realize, of course, golf carts aren't just little toy cars," said Lee, who was not involved in the study. "Parents do need to be thoughtful about who is driving the golf cart, especially when there are other children in the golf cart."

More severe fractures and dislocations can have long-term complications, Lee said, and it's important to remember that children can also get head injuries from falling from golf carts.

"I think just doing the research is important and that will allow for educating parents to just remind them that this is a motor vehicle, albeit a slow-moving vehicle, and so with all things, just appropriate supervision and safety guidelines should be explained to the children who are riding in them," Lee said.