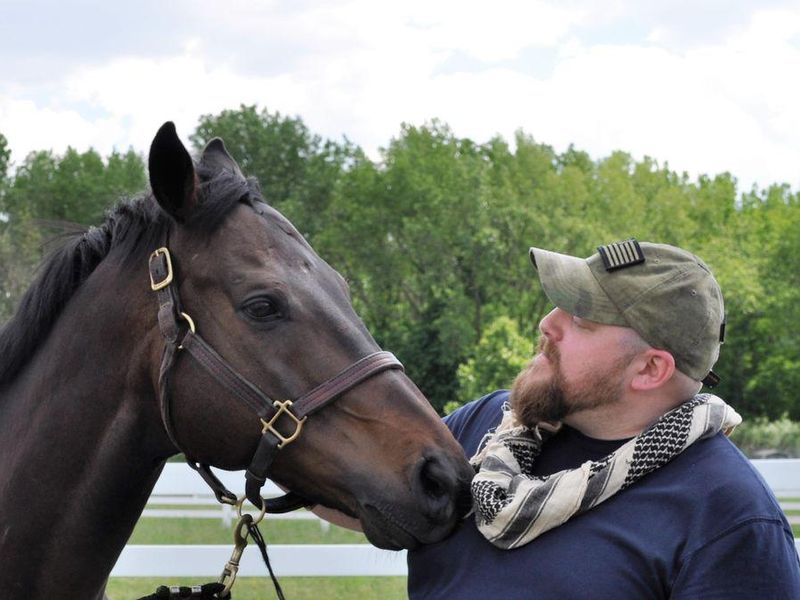 As a Marine Corps veteran who served in both Iraq and Afghanistan, Matthew Ryba understands what life in a combat zone can do to soldiers' minds, leaving many struggling with post-traumatic stress disorder.

Now, new research shows that equine therapy might go a long way in starting the healing process for these veterans. In the program, participants learned about horses, stroking their sides, cleaning hooves and building trust with the animals.

"We saw with the study that a lot of people who were not amenable to going into traditional therapy because they had an idea of what mental health therapy was because they had this kind of ingrained, sense of, 'I don't need help. I'm a military service member. I'm stronger than this kind of a thing,'" said Ryba, who is now director of community outreach and education for the Military Family Wellness Center at New York Presbyterian/Columbia University Medical Center in New York City.

The U.S. withdrawal from Afghanistan and the attack that caused the death of dozens of people, including 13 members of the U.S. military last week, is dredging up a lot of memories for veterans, Ryba noted.

"We're at a very pivotal moment where programs like this ... and the other military support programs for veterans are of the utmost importance," Ryba said. "We see the suicide rate continuing to rise. These problems are getting worse and not better, and we really need the support from the public and from others to be able to fund this kind of research so that we can find tools to be able to help veterans that need it."

The new study assessed the equine therapy program known as the Man O' War project for veterans at the Bergen Equestrian Center in northeastern New Jersey.

"We were totally open to it not working," Fisher said.

The study was conducted from July 2016 to July 2019, enrolling 63 veterans who had PTSD. They were men and women with a wide range in ages. Their PTSD was assessed by a clinician and through self-reporting before they started the program, mid-treatment, after treatment and three months later.

Researchers grouped the participants into teams of typically four veterans plus two horses, a mental health professional, an equine expert and a third staff person, to be another set of eyes.

The participants received eight weeks of weekly 90-minute sessions with the horses, where they might talk about their PTSD, but didn't speak specifically about their traumas.

In addition to recording and assessing the process, the researchers worked with manual writers to create a detailed book of the therapy protocol, to help guide other programs in the future.

"Our study would say, it could work, but what we looked at is, does a specific type work? We're not speaking for equine-assisted therapy as the whole field," Fisher said. "But I think it is a good indication that it does work, that there is something about it that can be really, really helpful."

The veterans had marked improvement in PTSD symptoms and in depression after the treatment ended, and that persisted even three months later.

Though training has already begun to help other programs try this type of project, it may not be a good fit for all equine-based programs, Fisher said. Having a mental health professional on the team is critical for certain mental health conditions, she said.

"PTSD is a serious illness. People can get worse. My own personal opinion is if you go to a program and think you're getting treatment, then you might not be going to [other] treatment that might help you," Fisher said. "So, it's really important that you have somebody who keeps an eye on what's going on and knows if you're getting worse or you're getting better."

The program is a gentle introduction to therapy, with opportunities for participants to ground themselves, help each other, and learn about communication and self-regulation, Fisher added.

The study was an open trial, which makes it harder to say the changes the participants experienced were specifically because of the horses. A randomized, controlled trial with different types of treatments, would be more definitive. The findings were published Aug. 31 in the Journal of Clinical Psychiatry.

The study results are encouraging, said Dr. Stephen Stern, a psychiatrist and adjunct professor in the Department of Psychiatry and Behavioral Sciences at the University of Texas Health Science Center at San Antonio. It's also important to be careful about how to interpret it, he added.

Both the staff and the participants were likely enthusiastic, which can have an effect on people's symptoms, said Stern, who wasn't part of the research. The study also included a lot of human interaction with veterans in small groups and study staff, alleviating some of the loneliness experienced by those with PTSD.

"I think the paper itself was really very good and they didn't hype their results at all, but I think it's important that the public not overinterpret this," Stern said. "Yes, this is encouraging, but we don't know to what extent this therapy actually had an effect and we need to study it further."

The U.S. National Institute of Mental Health has more on post-traumatic stress disorder.