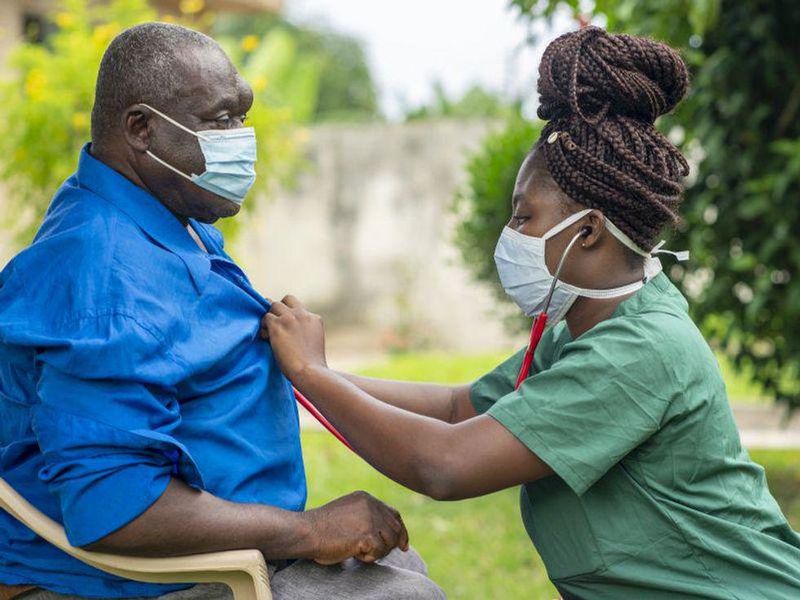 All U.S. nursing home staff must be vaccinated against COVID-19 or their employers will risk losing Medicare and Medicaid funding, President Joe Biden announced Wednesday.

"If you visit, live or work in a nursing home, you should not be at a high risk for contracting COVID from unvaccinated employees," Biden said during a speech made from the White House. "While I'm mindful that my authority at the federal government is limited, I'm going to continue to look for ways to keep people safe and increase vaccination rates."

The new mandate, which will come in the form of a regulation to be issued by the U.S. Centers for Medicare & Medicaid Services (CMS), could happen next month, the Associated Press reported.

The move comes as the highly infectious Delta variant now accounts for 99% of coronavirus cases in the United States and fresh data points to a link between low vaccination rates in some nursing homes and case spikes among residents, CNN reported.

Mark Parkinson, president and CEO of the American Health Care Association and National Center for Assisted Living, praised the move, but asked for more.

"Vaccination mandates for healthcare personnel should be applied to all healthcare settings," he said in a statement. "Without this, nursing homes face a disastrous workforce challenge."

"Focusing only on nursing homes will cause vaccine-hesitant workers to flee to other healthcare providers and leave many centers without adequate staff to care for residents. It will make an already difficult workforce shortage even worse," Parkinson noted.

Why the tough federal stance on nursing homes?

Even though nursing homes have borne the brunt of the pandemic, particularly in its early stages, hundreds of thousands of nursing home workers are still not vaccinated, according to federal data.

About 1.3 million people are employed by the more than 15,000 nursing homes that participate in Medicare and Medicaid. Some 62% of those workers are vaccinated nationwide, CMS data shows, but the figure ranges from 44% to 88%, depending on the state, CNN reported.

After months of urging Americans to get shots, using incentives and giveaways in some instances, the Biden administration has been turning to stronger measures to get millions of Americans vaccinated.

In the past three weeks, Biden has said millions of federal workers must prove they have been vaccinated or face onerous requirements and restrictions, while a vaccine mandate for the military could come as soon as next month.

The new effort seems to be paying off, as the rate of new vaccinations has nearly doubled over the past month, the AP reported. Nearly 200 million Americans have now received at least one dose of the vaccines, according to the White House, but about 80 million Americans remain eligible but not yet vaccinated.

Early Data Shows Rise in Breakthrough Infections Among the Vaccinated

Preliminary data from seven U.S. states show that the arrival of the Delta variant in July may be fueling a rise in breakthrough infections among the fully vaccinated.

At least 1 in every 5 new COVID-19 cases in six of these states have involved vaccinated people, with higher percentages of hospitalizations and deaths among these folks than had previously been seen in all seven states, The New York Times reported.

If breakthrough infections are becoming more common, "it's also going to demonstrate how well these vaccines are working and that they're preventing hospitalization and death, which is really what we asked our vaccines to do," said Anne Rimoin, an epidemiologist at the University of California, Los Angeles, told the Times.

Importantly, a vast majority of vaccinated people who are hospitalized for COVID-19 are likely to be older adults or those who have weakened immune systems. CDC data show that 74% of breakthrough cases are among adults aged 65 or older.

The numbers suggest that people who are at higher risk for complications from COVID-19, and anyone who lives with a high-risk person, "really needs to seriously consider the risks that they're taking now," Dr. Dean Sidelinger, a state epidemiologist and state health officer for Oregon, told the Times.

"Remember when the early vaccine studies came out, it was like nobody gets hospitalized, nobody dies," Dr. Robert Wachter, chairman of the department of medicine at the University of California, San Francisco, told the Times. "That clearly is not true."

"If the chances of a breakthrough infection have gone up considerably, and I think the evidence is clear that they have, and the level of protection against severe illness is no longer as robust as it was, I think the case for boosters goes up pretty quickly," Wachter added.

The seven states analyzed by the Times -- California, Colorado, Massachusetts, Oregon, Utah, Vermont and Virginia -- were chosen because they are keeping the most detailed data, the Times said. It is not certain whether the trends in these states would hold across the country.

The increases seen are largely due on the mathematics of mass vaccination: Scientists have always expected that as the number of vaccinated people exponentially grows, vaccinated people will show up more frequently than before in tallies of the severely ill and dead.

"We don't want to dilute the message that the vaccine is tremendously successful and protective, more so than we ever hoped initially," said Dr. Scott Dryden-Peterson, an infectious disease physician and epidemiologist at Brigham & Women's Hospital in Boston. "The fact that we're seeing breakthrough cases and breakthrough hospitalizations and deaths doesn't diminish that it still saves many people's lives."

The states' data do confirm that vaccinated people are still far less likely to become severely ill or to die from COVID-19. In California, the 1,615 hospitalizations of people with breakthrough infections as of Aug. 8 represents just 0.007% of nearly 22 million fully immunized residents, and breakthrough deaths constitute an even smaller portion, the Times reported.

But in six of the states, breakthrough infections accounted for 18% to 28% of recorded cases in recent weeks, the newspaper said. These numbers are likely to be low, because most fully immunized people may not feel ill enough to seek a test.

Breakthrough infections accounted for 12% to 24% of COVID-19 hospitalizations in the states, the Times found. The number of deaths was too small to arrive at a solid number, although it does appear to be higher than the CDC estimate of 0.5%.

The latest numbers make a good case for booster shots, and a recent survey showed that seniors can't wait to get one: Among vaccinated Americans, 72 percent of those who are 65 or older already say they want a booster shot.