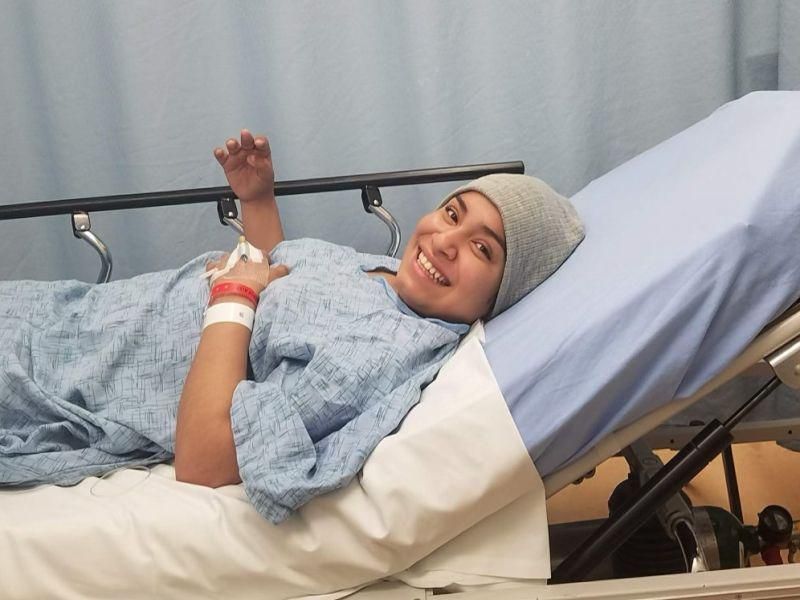 She's Beating Leukemia With a Healthy Change to Her Diet

Angie Gaytan never cared much for beets, but beets sure do love her -- doctors say that veggie shakes, fruits, beet juice and other healthy foods likely helped the 16-year-old defeat her life-threatening leukemia.

Such a healthy diet helped more than Angie: A new study found that adopting a low-fat, low-sugar diet appeared to boost the effectiveness of chemotherapy in a group of 40 children that included Angie.

Kids who ate healthier, slightly cut their calorie intake, and burned a bit more energy through exercise wound up with a lot fewer cancer cells lingering in their bodies following their first month of chemo, compared with an earlier group of children who went through standard cancer care, said lead researcher Dr. Etan Orgel, a pediatric oncologist with the Children's Center for Cancer and Blood Diseases at Children's Hospital Los Angeles.

"We found that just these moderate changes in diet and increasing exercise a bit was able to make the chemotherapy more effective and reduce the chances of having leukemia left over after the first month by 70%, which is a huge shift," Orgel said. "As you can imagine, the cancer that's left behind is the one that's the hardest to cure."

In Angie's case, cutting calories meant eating her veggies by any means necessary.

"My mom wanted me to eat healthier, so she made me these juices with kale and celery and beets," Angie recalled. "She would make different types of things I wouldn't eat before. Beet juice -- I would never have drank that."

It seems counterintuitive, given that most people are taught from childhood that you should feed a cold to starve a fever, but Orgel and his colleagues expected that reducing calories would make cancer cells more vulnerable to treatment.

"For decades now, we've known that cancers need a lot of support from the body to grow. It needs nutrition," Orgel said. "There's been a lot of work trying to figure out how we can use that in order to make our chemotherapy work better or affect the cancer in some ways."

The research team recruited a small group of patients between the ages of 10 and 21, and asked them to make lifestyle changes during their first month of chemotherapy that would result in a calorie deficit of at least 20%.

The kids all suffered from B-cell acute lymphoblastic leukemia, a cancer affecting the white blood cells in the bone marrow. They received their chemotherapy at Children's Hospital Los Angeles and the City of Hope National Medical Center in Duarte, Calif.

"We chose this specific cancer because it's the most common cancer in children," Orgel explained. "It affects the most children across the country."

Parents and kids met with a dietitian to help create an eating plan that would cut calories, decrease fat and sugar intake, and add protein, Orgel said.

They also met with a physical therapist to design an exercise regimen that would burn 10% more calories than their current level of activity.

For Angie, this meant long walks with her parents, as well as some video-guided exercise programs in the living room.

By the end of the trial, about 4 in 5 of the kids met their diet goals, but only 1 in 3 stuck to their exercise program, researchers reported.

The children didn't experience any significant loss of fat tissue in their bodies.

However, their chemotherapy appeared to have been more effective. They had much lower amounts of cancer cells left in the body after treatment, which is a strong predictor of future relapse.

Angie finished treatment in June 2020, a little more than two years after her first diagnosis. She said she's now cancer-free and her care has been cut back to monthly checkups.

A high school junior, Angie has been happy to get back to playing basketball, and she plans to study to become a nurse.

"I thought it was a good idea," Angie said of the study. "I didn't know what to expect. I thought it would be something completely different. I didn't cut anything out -- it was just different, the food I ate."

"Rather than increase the dose of these toxic chemicals that we know are horrible for your body in all other ways except they're very effective at killing cancer cells, let's do something that we know is good for the body and see if we can help make it more effective," Teras said.

Teras liked that the diet and exercise plans were individualized to each of the children and was encouraged by the outcome, but added that more study in a larger group is needed.

"Their results were very promising," Teras said. "I would put this in the category of 'cautiously optimistic.'"

Later this year, a larger trial will commence involving children with leukemia at more than 20 hospitals across the United States, Orgel said.

"The first trial exceeded all our expectations, so we're very excited to be launching the next trial later this year," Orgel said.

The hope is that this approach also could help improve chemo effectiveness in adults, and that it's so simple that it could be adopted by any hospital, Orgel said.

"This is something that people anywhere can do without a lot of resources," Orgel said. "You don't have to go to a major cancer center to adopt a nutrition plan."

The new study was published April 1 in the journal Blood Advances.

The U.S. National Cancer Institute has more about nutrition in cancer care.