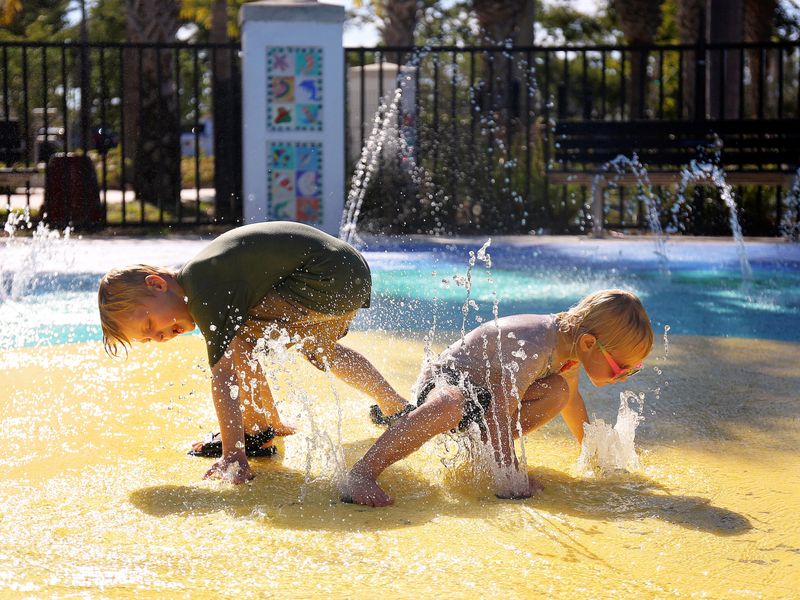 Splash pads -- those shallow pools of wet, cooling summertime fun for kids -- can also be sources of nasty gastro infections for youngsters who swallow water during their play.

That's the take-home lesson from a new analysis of outbreaks of two bacterial illnesses, shigellosis and norovirus, that struck kids frolicking in a splash pad at a Kansas wildlife park last summer.

Overall, 21 kids came down with shigellosis (caused by the Shigella bacterium) in an outbreak that started June 11, 2021, and another six cases of norovirus were tied to visits to the wildlife park a week later, according to researchers from the U.S. Centers for Disease Control and Prevention.

Both illnesses can be easily transmitted through swallowed water if it's contaminated with feces bearing these bacteria, said a team led by Samaria Aluko of the CDC's Division of Foodborne, Waterborne, and Environmental Diseases.

The symptoms of shigellosis and norovirus aren't easy: vomiting, diarrhea, stomach cramps, fever that can last for a day or two (for norovirus) and up to a week or even longer for shigellosis.

None of the 21 kids who came down with shigellosis died from the dehydrating illness, although three cases involved illness so bad that children required an average of three days of hospital care. As well, one of the six kids who got norovirus was hospitalized for a day.

In each of the Kansas outbreaks, "getting splash pad water in the mouth was associated with illness on both days," the researchers said. "Outbreak contributing factors included inadequate disinfection, equipment and training."

For example, "water stood in the collection tank [into which water drains after spraying users and before it is filtered, disinfected and resprayed] overnight instead of being continuously recirculated, filtered and chlorinated," the CDC team said. The splash pad also didn't have an automated controller that could regulate the amount of germ-killing chlorine in the water.

Finally, staffers who ran the splash pad for the park had no documents proving they had undergone any training to safely manage it.

The outbreaks prompted the closure of the splash pad, and steps were taken to rectify the issues noted. "After these interventions were implemented, no additional splash pad-associated illnesses were identified," the CDC researchers noted.

Right now, "state and county public health codes [in Kansas] do not include regulations for splash pads. Thus, these venues are not typically inspected, and environmental health expertise is limited," Aluko's group said.

They suggested closer adherence to guidance around water chlorination, and perhaps posting signs to help cut down on kids infected with bacteria from entering splash pads: "Don't get in the water if sick with diarrhea," "Don't stand or sit above the jets," and "Don't swallow the water."

The report was published in the Aug. 5 issue of the CDC journal Morbidity and Mortality Weekly Report.

Find out more about shigellosis at the Mayo Clinic.