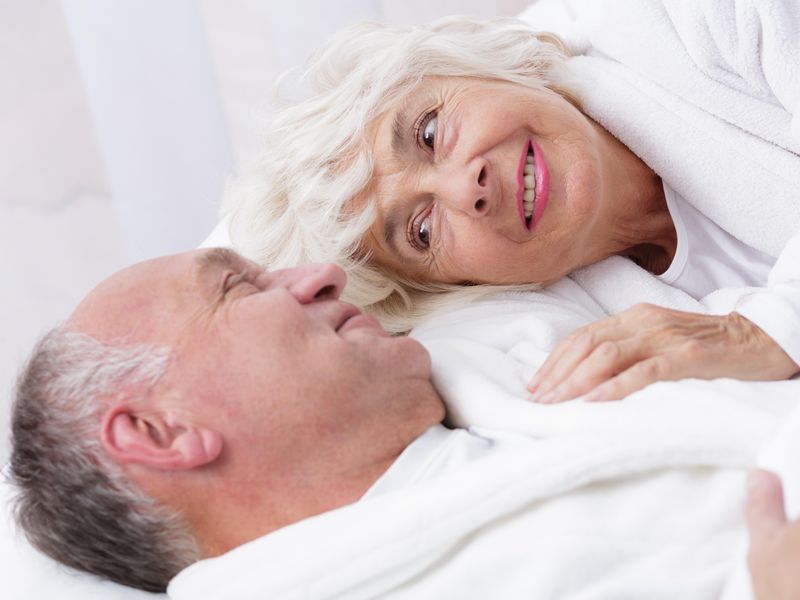 Sex in the Senior Years: Why It's Key to Overall Health

Lovemaking isn't just for the young - older people gain a lot of satisfaction from amorous relations as well.

But things get complicated as people age, and many folks let this important part of life drift away rather than talk about sexual problems with either their partner or their doctor, experts told HealthDay Now.

"Not many people talk about sex with their doctors, especially as we age," said Alexis Bender, an assistant professor of geriatrics with the Emory University School of Medicine, in Atlanta. "So many people do report sexual dysfunction on surveys, but they don't when they're talking to their doctors. And so it's important to have those conversations with primary care physicians."

It's worth discussing. A healthy sex life brings many benefits to seniors, experts say.

Sex has been linked to heart health, as well as overall mental and physical health. "It's definitely an association, and it's positive," Bender said.

For example, lots of beneficial biochemicals are released by the body during sex, said HealthDay medical correspondent Dr. Robin Miller. These include DHEA, a hormone that helps with cognitive function, and oxytocin, another hormone that plays a role in social bonding, affection and intimacy.

"Having sex is a really important part of overall health and happiness, and people that have it, they live longer," said Miller, a practicing physician with Triune Integrative Medicine in Medford, Ore.

Sex can actually get better as you get older, Miller added.

"For instance, for men, they can control their ejaculation better as they get older," Miller said. "Women aren't worried about pregnancy once they go through menopause, so they're freer."

Unfortunately, aging does complicate matters a bit when it comes to sex, Bender noted.

The changes wrought by menopause and andropause also can affect the sex lives of older men and women, Miller said.

Luckily, modern medicine has made advances that can help with these problems. Hormone replacement therapy can help women with the physical symptoms of menopause that interfere with sex, Miller said, and men have Viagra and other erectile dysfunction drugs.

"That's when they realized this was a much better medicine for erectile dysfunction than high blood pressure, and that's made a big difference for men," Miller continued.

Women can take Viagra as well, "but women don't like the side effects. Men don't really like them, either, but they're willing to put up with them," Miller said.

"What I found is for women that you can use Viagra as a cream on the clitoral area," Miller said. "I call it 'scream cream.' You can get it made up at a compound pharmacy. It works like a charm. You still have to wait 40 minutes like men do, but there's no side effects, and it works, especially for women who are on antidepressants, who have trouble reaching orgasm. It really is very helpful."

So help is out there, but seniors will have to get over their hang-ups and talk to their doctor to take advantage of these options, the experts said.

"Sex and sexuality are taboo in our society," Bender said. "Especially for women, sex is highly regulated and talked about at an early age, and we're really socialized to not be sexual beings."

Miller said, "I think it's generational. Some Baby Boomers have a hard time talking about sex. My kids don't have any trouble talking about it. I bet yours don't either."

Women also face practical problems when it comes to finding a sex partner, particularly if they're looking for a man, Bender said. Women outlive men, so the dating pool shrinks as time goes on, and men tend to choose younger partners.

Through her research, Miller was surprised to learn that many women just give up on the search.

"Even though I think it's important to have a healthy sex life and healthy partnership, a lot of women don't want to reengage in partnership as they get older," Miller said. "They've been married. They've taken care of people for a very long time. They've taken care of their husbands and their children. And they just say, I don't want that anymore. I'm happy to sit and hold hands with someone, but I don't want to get into a relationship again. And so that kind of challenged some of my generational thinking about what relationships mean over time."

The Mayo Clinic has more about good sex and aging.