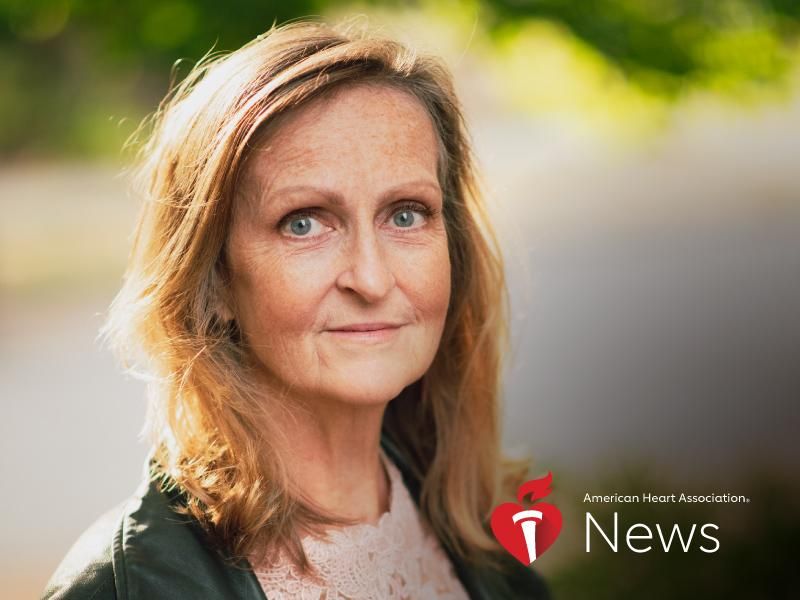 AHA News: She Tried to Forget Her Stroke. Now, She's Putting It Into Words.

Beth Bonness talked into the mirror as her hairstylist, standing behind her, applied reddish highlights to her brown shoulder-length hair. They'd known each other for years, and Bonness was relaying a funny story from a trip to Rome.

Suddenly, the stylist started moving her hands around in the mirror like she was trying to interrupt Bonness.

Bonness, confused, asked her what was wrong. In her mind, the words were coming out of her mouth. But she could see in the mirror that her lips weren't moving.

The left side of her temple started to throb. She started seeing bursts of light in the sides of her vision, like sparklers or exploding snowflakes. She noticed her right hand was curled into a claw.

Just as suddenly, the sensations vanished and her hand relaxed.

Her husband, Jeff McCaffrey, was with two of their three daughters at a nearby restaurant, close to their home in Portland, Oregon.

Feeling fine though a bit shaken, Bonness walked over to join them. She didn't tell McCaffrey what had happened until they were back home. He insisted they go straight to the emergency room.

At the hospital, Bonness' blood pressure was elevated. She was given medication to bring it down.

Tests indicated she had a TIA, or transient ischemic attack. Also known as a mini-stroke, TIA is a short-term blockage of blood flow to the brain caused by a clot or blockage. Symptoms usually last less than five minutes. About a third of people who have a TIA go on to have a more severe stroke within a year.

Bonness said she was told it was a one-off incident, so she didn't worry about future problems.

Plus, only old people have strokes, she told herself. She was 49, healthy and fit. Even the doctors implied that she was too young to worry.

A few days later, Bonness was grocery shopping when she saw shooting lights in her peripheral vision again. She returned to the hospital for more testing. They told her their best guess was migraines or multiple sclerosis.

The same week, while having a meal with her husband and three daughters, her speech slurred again. She also had trouble finding the right words, called aphasia. One of her daughters pointed at an apple and asked Bonness what it was.

"An orange," she answered.

Again, she headed to the ER.

This time, doctors told Bonness she'd had a stroke caused by a carotid artery dissection. That is essentially a tearing inside one of the main pathways delivering blood from the heart to the brain. She was treated with blood thinners.

Although the aphasia and shooting lights subsided, Bonness -- a high-tech marketing executive at the time -- found herself needing more time to gather her thoughts and to speak and write clearly. Balance issues forced her to trade in her signature high heels for flats.

Bonness went on disability for a few weeks, returned to work part time for three months, then returned to work full time. In the beginning, she felt less confident to speak. She felt more comfortable communicating by email, which still took great effort.

With her colleagues, friends and extended family, Bonness downplayed the stroke. She did her best to mask any limitations -- even to herself. Instead, she threw herself into living as healthy as possible.

Attacking her health like she would a work project, Bonness created a spreadsheet to track her nutrition, exercise and meditation. She also cleaned up her diet. Out went starchy comfort foods; in came organics. She now eats a solely plant-based diet.

The changes began in 2007. In 2011, her doctor said she'd reached the ultimate goal she'd set for herself at the beginning of her renewed health plan. Bonness stopped all stroke-related medication.

In 2014, Bonness retired. The next year, so did McCaffrey. Leaving their jobs didn't mean they stopped working.

They ended up saving a historic craftsmen-style home in their neighborhood from demolition by relocating it and transforming it into a small residential development. The process had so many twists and turns that Bonness began writing a book about the experience.

The writing process forced her to become introspective, leading her to confront how much the stroke had challenged her sense of who she was and what she could accomplish.

"I realized that, digging deeper, with the house project, I was still trying to show I was in the game, that I could manage a multimillion-dollar project," she said.

She also realized that her upbringing -- being taught to not show her emotions -- kept her from facing her vulnerabilities sooner.

"I really was trying to disassociate myself from what happened, which in the long run wasn't healthy," she said. "My compassion is much bigger now, for myself and for others."

McCaffrey said his wife's initial reaction to the stroke was "classic Beth."

"She was ultra-determined, ultra-focused and wasn't going to let it get to her," he said.

He praised her dedication to healthy living, which inspired him, especially after twice being treated for cancer.

"To her credit, she's changed my diet dramatically," he said. "I feel better, I eat better. I exercise."

Bonness actually began writing about her stroke about a decade ago. She wrote a collection of poems from inside the mind of someone having a series of strokes. In "Wrong Word Dinner," she related her difficulties with speaking during the family meal just before her diagnosis: "Wrong words in my head stand in line ready for their turn. … Orange answers on apple's behalf."

Last year, she started sharing her writing. She published the poetry collection and began giving readings. She also started a writing group for survivors of stroke and brain injury in hopes that they too can find the same insight and solace.

"Maybe it's about doing more talking and sharing," she said. "Every experience you have, all that travels with you."