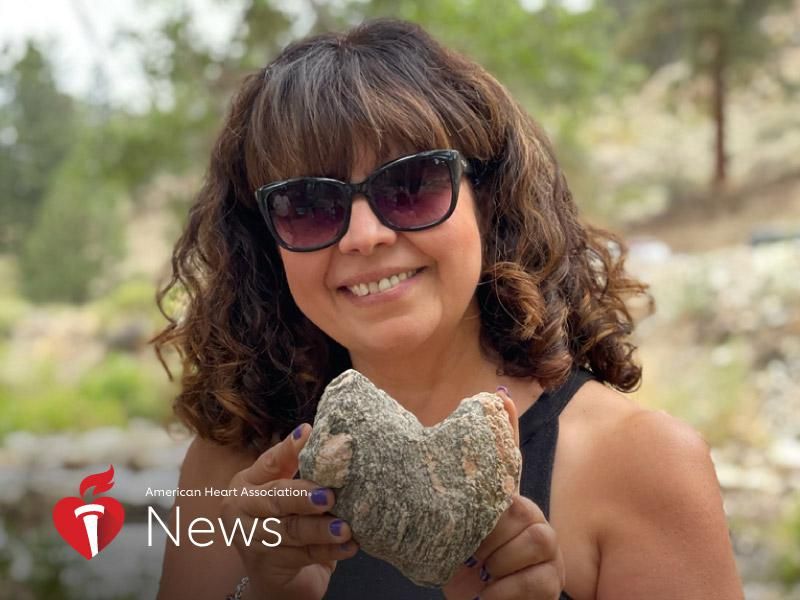 AHA News: She Was Being Treated for Her Lungs, But the Problem Was Her Heart

New Year's Eve 2018 was no party for Maria Philippon.

The manager of a banking call center in Orange County, Calif., she finished work and headed for her car. She stopped three times to catch her breath. She thought she might have to crawl on her hands and knees. By the time she made it 20 minutes later, she was dripping with sweat.

Frightened, Maria immediately called her doctor. She was told to call 911 or drive straight to the emergency room or urgent care.

Then 55, Maria hadn't felt right all year. She'd been to urgent care 10 times, gone to two hospitals, seen her primary care doctor and even visited a lung specialist. She received breathing treatments, used inhalers, had X-rays and took antibiotics. When she complained about sweating, weight gain, hair loss and swollen ankles, doctors told her not to worry. It was probably menopause.

Returning to urgent care on this New Year's Eve, it seemed like Groundhog Day.

"They took X-rays again. They gave me antibiotics again, and they thought it was pneumonia again," she said.

After going home and resting, Maria felt well enough to carry on with plans to go to a friend's house to celebrate the arrival of 2019. On the way, she received a call from a doctor at the urgent care clinic.

"It's not your lungs. It's your heart," the doctor said. "You have congestive heart failure."

She put the call on speakerphone so her husband, Gregory Philippon, could listen.

The doctor explained that a specialist compared her new images to ones done several months earlier. Doing so revealed that her heart had become enlarged.

The next morning, she arrived at the emergency room to find a medical team waiting for her. Maria was admitted in 15 minutes. After several tests, doctors confirmed the diagnosis and told her she needed open-heart surgery.

"If the whole building would have fallen on me, it would have been lighter than what I felt, because this is not happening!" she recalled. "They told me basically my heart had three valves that were malfunctioning, and I needed a double bypass on my arteries."

Still reeling, the couple sought a second opinion. A cardiologist delivered a better prognosis. She only needed a single bypass and might need to have one valve replaced if it couldn't be repaired.

Leading up to the operation, Maria laid in bed wondering if she'd live to see her two sons get married. She contemplated whether to donate her clothes or tell her husband where she wanted to be buried.

Her husband struggled as well.

"We've been married over 30 years. We dated for almost nine years before we got married, so she's my life," Gregory said, choking back his emotions. "I'd be lost without her."

The surgery was a success. Maria then went through five months of cardiac rehabilitation.

In the years since, she has lost more than 25 pounds, including a lot of fluid that had built up in her body. As a Latina who loves Mexican food, she watches her diet carefully, reading labels for sodium and carbohydrates, and staying away from beef. She believes with the help of a guardian angel at the urgent care center, she got a second lease on life.

She now takes part in the American Heart Association's Heart Walk, raises money for research and speaks out about heart disease in women. She tells other women to be their own advocate.

"I am living proof that you need to listen to your body," she said. "Don't ignore your symptoms because very easily a lot of women die because they ignore the symptoms."