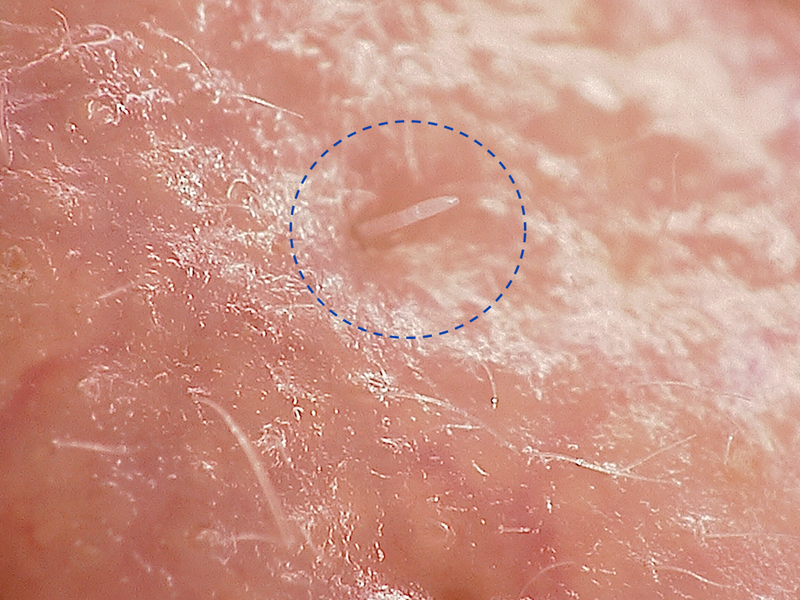 Tiny Mites Are Feeding on Your Skin, But for How Long?

It's an icky truth: Everyone has millions of tiny mites living and mating on their skin.

Not to worry, though -- Demodex folliculorum skin mites actually help keep your pores clean and your skin healthy, stressed Alejandra Perotti, an associate professor of invertebrate biology with the University of Reading in the United Kingdom.

However, her team's recent research suggests the helpful mites might be on the verge of extinction.

The first-ever genome sequencing study of Demodex mites has revealed that their isolated existence has caused them to shed so many unnecessary genes and cells that they're now wholly dependent on humans for their existence, Perotti said.

"It will likely happen that we will lose them within several human generations," Perotti noted.

Researchers say that if they do survive, it will be because they transition from external parasites to internal symbionts -- organisms that survive wholly off their hosts, essentially becoming one with them. The bacteria in your gut are one example of a human symbiont.

These mites are about 1/64 of an inch long, and are found in hair follicles on the face and eyelashes, the researchers said in background notes. It would take several of them to cover the head of a pin.

Most of these mites have a life cycle of around two weeks, leading a nocturnal existence during which they hatch, migrate, feed and mate before dying off, experts say.

More than 90% of humans carry these mites on their faces, and the mites generally maintain a peaceful co-existence with humans, she noted.

You inherited your skin mites from your mother, and new moms pass them on to their children, Perotti explained. The density of mites on your skin peaks in your 20s and 30s, when your skin is typically at its oiliest.

"They are present in all people with healthy skin. They are helpful because they maintain the health of the pores of our skin," Perotti said.

Demodex mites only cause skin problems in rare instances for people who are immune-suppressed or have other skin conditions. The weakened immune system allows the mites to multiply out of control, and the heavy mite populations produce skin irritation.

To learn more about these tiny passengers on your body, Perotti and her colleagues examined hundreds of Demodex mites collected from the forehead and nose of a single person with the help of a blackhead remover.

The mites were put under a microscope to make sure they were Demodex, and then cleaned and prepared for DNA analysis.

The researchers found that because the mites lead an isolated existence, they have evolved to become incredibly simple organisms. For example, their eight tiny legs are powered by just three single-cell muscles.

Evolutionary gene reduction also explains why they're nocturnal, the researchers noted. They lack protection against the UV rays in sunlight and have lost the gene that causes animals to be awakened by daylight. They also are unable to produce melatonin, a biochemical that promotes nighttime activity in small invertebrates but causes mammals like humans to nod off.

Luckily for them, they have your melatonin to fuel their nocturnal pursuits.

"They depend more on us than we on them," Perotti said. "For example, they take the melatonin they need from their host. We secrete melatonin massively at dusk, which puts us to sleep, and the mites use ours because they are no longer able to produce it."

The new study also found that Demodex mites have gotten a bum rap when it comes to skin problems.

Earlier research had thought that the mites lack an anus and, given that, accumulate feces throughout their two-week life cycle. The assumption was that the mites release a lifetime's worth of feces upon death, causing skin inflammation.

However, this new study discovered that Demodex mites do indeed have anuses, and so have been unfairly blamed for many skin problems.

The findings were published June 21 in the journal Molecular Biology and Evolution.

Whether you see Demodex as creepy or clever, you might not have these little mites to kick around for much longer, the researchers concluded. Because they have evolved to depend so heavily on humans and have a lack of exposure to potential mates from other hosts, the mites appear to be on course for potential extinction.

"One of the most common dermatologic diseases is rosacea, and rosacea has long been linked to humans having a robust immune response to the Demodex," said Bunick, an associate professor of dermatology at Yale School of Medicine, in New Haven, Conn.

Bunick estimated that between 3% and 10% of people have rosacea potentially linked to the skin mites.

"The idea that it never causes a problem is just not true. It can cause lots and lots of issues for people in terms of their skin," Bunick said.

So, the idea of Demodex mites either going extinct or becoming more symbiotic with humans isn't a bad thing to Bunick.

"Over time, the human body may learn to accept the Demodex more, so this subset of people that tend to develop inflammation in reaction to the Demodex, maybe that reaction continues to diminish as Demodex continues to have whatever selective pressure to become more symbiotic," Bunick said. "This data suggests the Demodex will become less problematic in triggering rosacea and other diseases."

The Cleveland Clinic has more about Demodex mites.