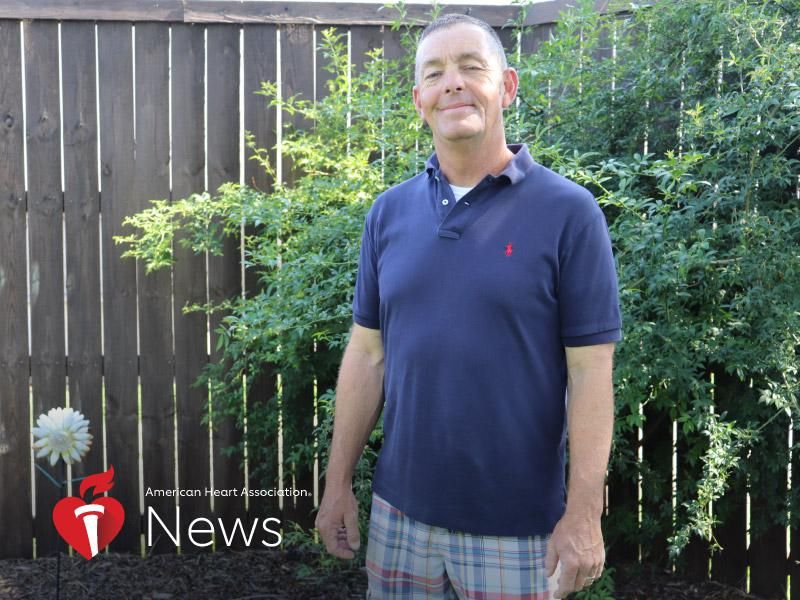 AHA News: Kitchen Magnet With List of Heart Attack Symptoms Convinced Him to Go to the Hospital

Danny Saxon was finishing a job repairing and cleaning a pool this past February when he started feeling like he had bad indigestion.

He popped a couple antacid pills and chugged a few bottles of water. He tried to make himself burp, hoping that would alleviate the pressure.

Minutes later, both his arms started tingling, almost vibrating, like all the muscles in his arms were tightening.

That's what scared him. He'd heard that a sign of a heart attack was a tingling arm. He had two.

But he was only 50, so he pushed that thought away.

His wife, Morgan, called from their home in Wylie, Texas, to find out when he was leaving.

"I'm freaking out," he told her. "I think I'm having an anxiety attack or something. I'll call you later."

Danny got in his truck and started driving. He couldn't decide whether to head home or to the hospital.

Morgan had never heard her husband talk like that. She thought about what he'd said. The "tingling arms" haunted her too.

He could be having a heart attack, she thought. Danny is 20 years older than her, so Morgan assumed his health would one day be a concern to her. But not yet.

Then again, Danny was on medication for high blood pressure. And, unlike her, he still smoked, despite their agreement to stop together when she was pregnant with their third child, now 2.

Suddenly, Morgan remembered the magnet she'd made some seven years earlier, when one of their sons was involved in an American Heart Association fundraiser through school.

The information kit had included a card spelling out the warning signs of a heart attack. She figured it was good information to have on hand. She cut it out and placed it over a commercial magnet that was already on the fridge, taping over the front to protect it. When they replaced their refrigerator, she'd made sure to transfer the magnet to the new one.

Morgan walked over and snapped a photo of the magnet.

She texted it to Danny with a note that read, "Do you need to go to the hospital? Call 911?"

Danny was at a red light when the message beeped its arrival.

He read the first couple lines on the magnet about chest and arm discomfort and recognized his symptoms. He headed straight for the hospital.

Just as he was walking up to the ambulance entrance, he saw an EMT.

"Hey man, I need some help," Danny said. "I think I'm having a heart attack."

The technician grabbed a wheelchair and rolled Danny inside.

As he was checking in, Morgan called.

"This is Brandon," the EMT answered. "I'm with Danny. He's having some chest pain and his blood pressure is pretty high. But he's laughing. Can you come as soon as possible?"

Morgan got the kids squared away. She arrived about an hour later with her father.

Danny was joking around in an exam room while a nurse, with her back to him, was typing up notes.

Morgan was relieved to see her husband smiling.

Out of nowhere, Danny started choking and made a gurgling sound. His eyes rolled back in his head and he tilted to the side.

The nurse ran over. She started chest compressions and called out for emergency assistance.

As the room became jammed with medical staff, Morgan's father pulled her into the hallway.

Danny had gone into cardiac arrest.

After three series of shocks with a defibrillator, Danny's heartbeat returned.

That evening, a cardiac catheterization showed that Danny had a 100% blockage in his right coronary artery. The doctor reopened the vessel with a balloon and stented the artery to restore blood flow. Two days later, Danny went home.

Both lifestyle and family history played a role in his heart attack. Danny's father had a quadruple bypass at age 60, and his mother had a stent. Danny was a longtime heavy smoker -- until that day in February, when he quit.

He'd been managing his high blood pressure for a year after learning it was a problem during a visit to the dentist.

"I'm a man raised in the country in Texas," he said. "I literally tried to ignore my heart attack and everything leading up to it."

Danny, who is not overweight and gets exercise at work and through coaching and playing with his children, mostly blames the cigarettes.

"I recently learned how vicious nicotine is on your blood vessels," he said. "I told my dad, 'That tobacco you're chewing, you'd better do some research. It still has nicotine.'"

Danny has recovered physically but still battles the emotions of his brush with death.

On his first day back at work, he had a panic attack that he thought was another heart attack. He went to the emergency room, where he was assured he was fine.

"I have mornings where I wake up and look at my wife and just think how you never know what the day will bring," he said. "Some days I have separation issues leaving the house."

Morgan also has struggled emotionally, but she hopes time will lessen her fears.

"The trauma of seeing my husband basically die was the hardest part," she said. "I can still hear all the sounds and noises. The thing I remember most is that my first thought was how I would have to go home and tell my kids that their dad died."

After hearing the couple's story, someone sent Morgan an official AHA magnet that lists the warning signs of a heart attack. Morgan added it to the refrigerator -- below her homemade version.