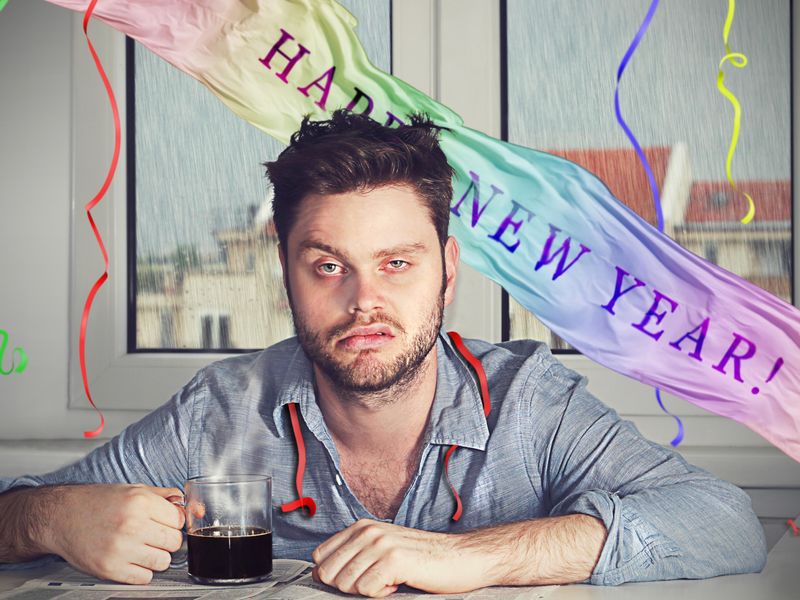 Too Much Auld Lang Syne: Avoiding That New Year's Hangover

Party people should think twice before relying on a fly-by-night remedy to cure the hangover they suffer from a New Year's Eve bender, warns an ER doc based in the Big Apple.

"There are a plethora of hangover products on the market that tout the ability to reduce the chances of or prevent a hangover altogether after a night of heavy drinking. But, in truth, the only proven way to prevent a hangover is to abstain from alcohol," said Dr. Robert Glatter, an emergency physician at Lenox Hill Hospital in New York City.

Folks suffer hangovers because they're in the throes of alcohol withdrawal, and because their body is trying to process a toxin called acetaldehyde that's produced as your body breaks down alcohol, he said.

"Headache, nausea, dizziness and difficulty concentrating result from not only the toxic by-products of alcohol metabolism, but your alcohol level dropping as you sober up," Glatter said.

Drunken folks also tend to have a lousy night's sleep as their liver struggles to process alcohol, and increased inflammation as their immune system responds to toxic alcohol levels, he said.

One family of hangover remedies feature a chemical extract known as DHM (dihydromyricetin) derived from the Japanese Raisin tree, Glatter said. These products also include vitamin B, milk thistle, prickly pear and taurine.

The companies claim that the combination of these ingredients can reduce the side effects of alcohol withdrawal that leave you feeling groggy and nauseated, Glatter said. They say DHM helps the liver detox faster and keeps alcohol from binding to receptors in the brain.

But DHM has only been studied in lab rats, and "there is no evidence to suggest it may work in humans," Glatter said.

Other products on the market claim to contain a proprietary combination of vitamins and anti-inflammatory compounds intended to reduce the chance of developing a hangover in the first place, Glatter said.

"It's taken before you start your night of drinking. Their goal is to prevent buildup of acetaldehyde, the toxic metabolite of alcohol, as well as the adverse inflammatory and immunologic effects of alcohol," he said.

None of these products are approved by the U.S. Food and Drug Administration, however, and none appear to be anywhere close to approval, Glatter said.

"With this in mind, I advise drinking nonalcoholic drinks such as club soda, ice tea and spritzers as alternatives to alcohol to avoid the chance of having a hangover in the first place," Glatter said.

If you're going to drink, he recommends having a good meal beforehand, since having food in the stomach slows the absorption of alcohol in the body.

"A meal which incorporates high protein and fat may help absorb alcohol," Glatter said. "Also, it is a good idea to snack throughout the evening to not only reduce the effects of alcohol, but also keep your blood sugar level steady."

People who choose to drink should nurse their cocktails and make every other drink a nonalcoholic one. Water is the best substitute, but sports drinks also can help your body stave off dehydration.

Folks who want to avoid a hangover should stay away from darker alcohols like red wine or whiskey, because they contain higher levels of toxic by-products from the fermentation process, Glatter said.

Before you hit the hay, you should take a nonsteroidal anti-inflammatory (NSAID), Glatter said. This can alleviate some of the pain associated with a hangover headache.

Black coffee is the standard remedy in movies and TV to wake up a drunk, but Glatter warns that "caffeinated drinks in general increase heart rate and actually contribute to dehydration."

Bottom line: "There is no magic pill to prevent a hangover," Glatter said. "Drinking less than you normally do, or abstaining altogether is the only proven way to reduce the chances of getting a hangover."

Harvard Medical School has more about curing your hangover.