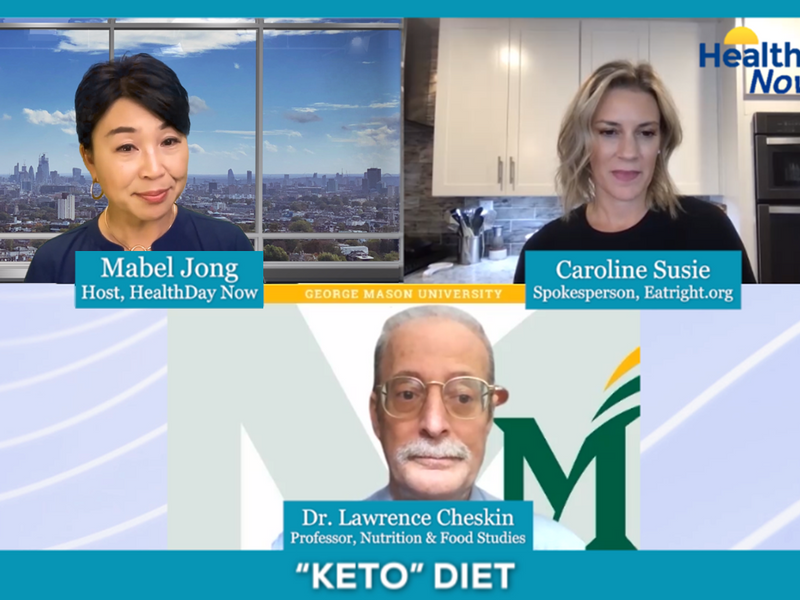 Folks who are determined to shed some pounds in the New Year face a bewildering array of fad diets and quickie weight-loss schemes.

Those weighing eating patterns and diet plans such as intermittent fasting, the Keto diet, the Whole 30 Program and the Mediterranean diet would do well to keep two primary facts in mind, nutrition experts told HealthDay Now.

First, the diet that's right for you depends in large part on what you like to eat and what will fit best into your personal lifestyle.

"What works best for people is what you will stick with, what is comfortable for you. So, if you're seeking to change your diet, you first have to know yourself and to do things you will stick with," said Dr. Lawrence Cheskin, chair of nutrition and food studies at George Mason University in Fairfax, Va. "It's useless to do any of these diets if you're going to do them for a week and then go back to business as usual."

Second, any diet or eating pattern will help you lose weight only if you're ingesting fewer calories than you're burning day in and day out. A good weight-loss diet will include all of the nutrients that you need to maintain health, but limit your calories.

"Anytime we reduce caloric intake we're going to see weight loss," said Caroline Susie, a registered dietitian in Dallas and a spokeswoman for the Academy of Nutrition and Dietetics.

Two of the eating patterns with the most science behind them -- intermittent fasting and the Mediterranean diet -- weren't initially intended as a means of weight loss, the experts pointed out.

Intermittent fasting requires that people only eat during specific hours of the day, or drastically limit their calorie intake on certain days of the week.

"What's nice is it doesn't tell you what to eat. It tells you when to eat. If you're somebody who isn't a big fan of lists or what's on my plan or not on my plan, this could be an option for you," Susie continued.

Studies have shown that intermittent fasting can help people manage their weight about as well as typical diets, Cheskin said. He follows such a dietary pattern, eating only between 7 a.m. and 7 p.m. every day.

"It probably works because it is not quite as taxing. If you have to 100% of the time adhere to a very strict dietary plan, we all know most people are not going to do that for long and they're not going to enjoy it," Cheskin said.

However, people with eating disorders should avoid fasting, as it could trigger their problems with food, Susie noted.

The Mediterranean diet has the most science behind it and is touted as a means of maintaining heart health -- but again, it's not aimed at weight loss.

The diet is based on the cuisine of countries bordering the Mediterranean and is typically heavy in vegetables, fruits, whole grains, beans, nuts and unsaturated fats like olive oil, according to the American Heart Association. You can also eat low to moderate amounts of dairy products, eggs, fish and poultry.

"It's a healthful diet, but not designed for weight loss," Cheskin said. "Countries that tend to have a Mediterranean diet are not particularly thinner than any other countries. If you have nothing but healthy fats, they have just as many calories as the unhealthy fats. It's a good eating pattern, but if you want to use it to lose weight then you also have to reduce fat and calories."

The Mediterranean diet has been shown to reduce inflammation, which is associated with many different chronic diseases, Susie noted.

"I think it's a wonderful way of eating, and it also allows for a glass of wine here and there," Susie said. "I think it's my favorite because it's very inclusive."

The Keto diet is another trendy weight-loss plan, although Susie warns that it's not all that new a concept.

"This diet has been around for a while," previously going by the names of Atkins or South Beach diets, Susie said. "I feel like it has a really great marketing manager, because every so often this diet gets rebranded."

"Basically you're asking your body to work off of fats instead of primarily carbohydrates in the diet," Cheskin said.

However, the Keto diet can be tough on a person.

"To get there can be a little bit brutal," Susie said, noting that people new to the diet often suffer a few days of the "Keto flu" during which they feel foggy-headed, lethargic and headachy. Other common side effects are disrupted sleep and constipation.

"When we remove some of these foods, we're taking away key nutrients and removing a lot of fiber," which can lead to constipation, Susie said.

"In some ways, this is a heart attack diet," he said. "Eat all the bacon you want, just don't have potatoes -- well, you're eating a diet that's the opposite of what preventive cardiology would tell you to do."

Folks will lose weight on Keto if they're eating less, "but you would probably obtain greater health benefit if you lose a similar amount of weight using a diet that is more healthful," Cheskin said.

Cheskin and Susie were the most critical of the Whole 30 Program, a diet in which participants cut out added sugars, grains, legumes and dairy for a solid month.

"What's a little concerning about the Whole 30 diet is this was founded by people that have limited nutrition education," Susie said. "It's extremely restrictive. For 30 days you are going to eliminate a lot of different food groups."

The diet requires you to cut out foods like beans or low-fat dairy that generally are considered nutritional heavyweights, Susie said.

The Whole 30 diet "will tend to decrease inflammation and can cause weight loss depending on how many calories you're eating," Cheskin said. "It's not meant to produce weight loss specifically, but certainly can be used for that. It was designed by sports nutritionists."

After the first 30 days, people can start to reintroduce things like beans that they've taken out of their diet, Cheskin said.

The best diet: One you stick with

However, such restrictive diets can be hard to maintain for most, and people will tend to fall off the wagon over time, the experts said.

There's no such thing as a cheat day for her, Susie concluded.

"I'm a big believer that all foods can fit. If I am craving something, I'm going to honor that craving and have a small amount of whatever it is," Susie said. "If I'm out to eat and somebody wanted to share a few bites of dessert, it's not going to throw me off. I'm just going to get back on my plan as soon as I'm on to the next meal or snack."

The Academy of Dietetics and Nutrition has more about fad diets.